Team Returns to No. 3 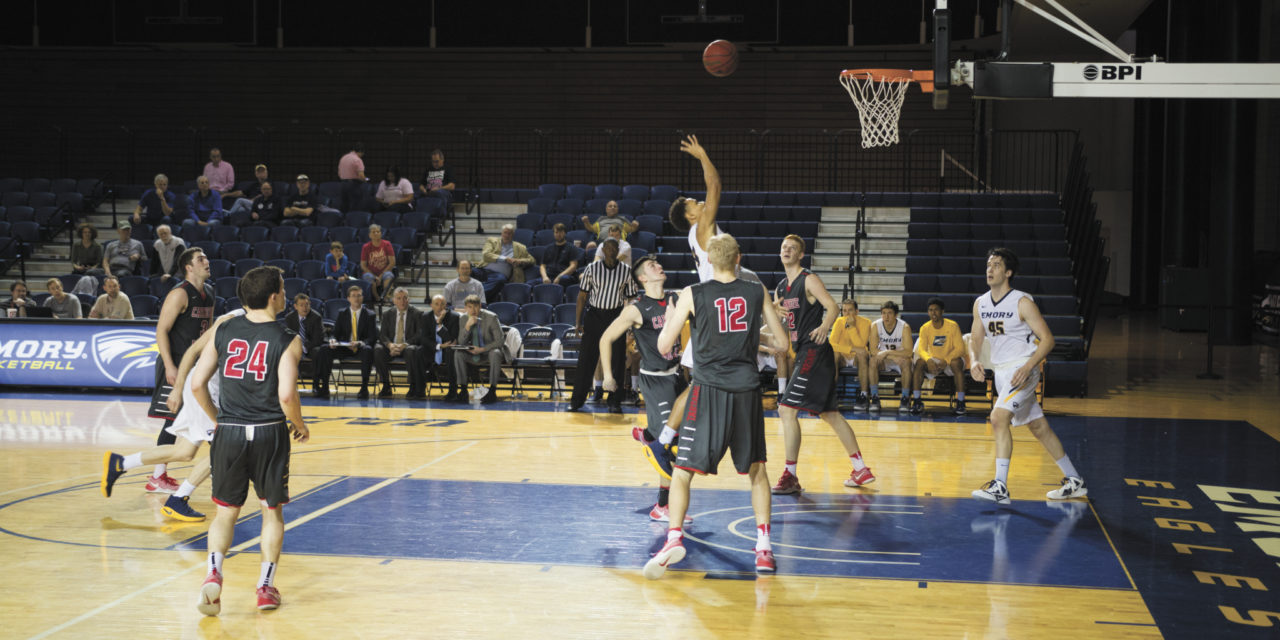 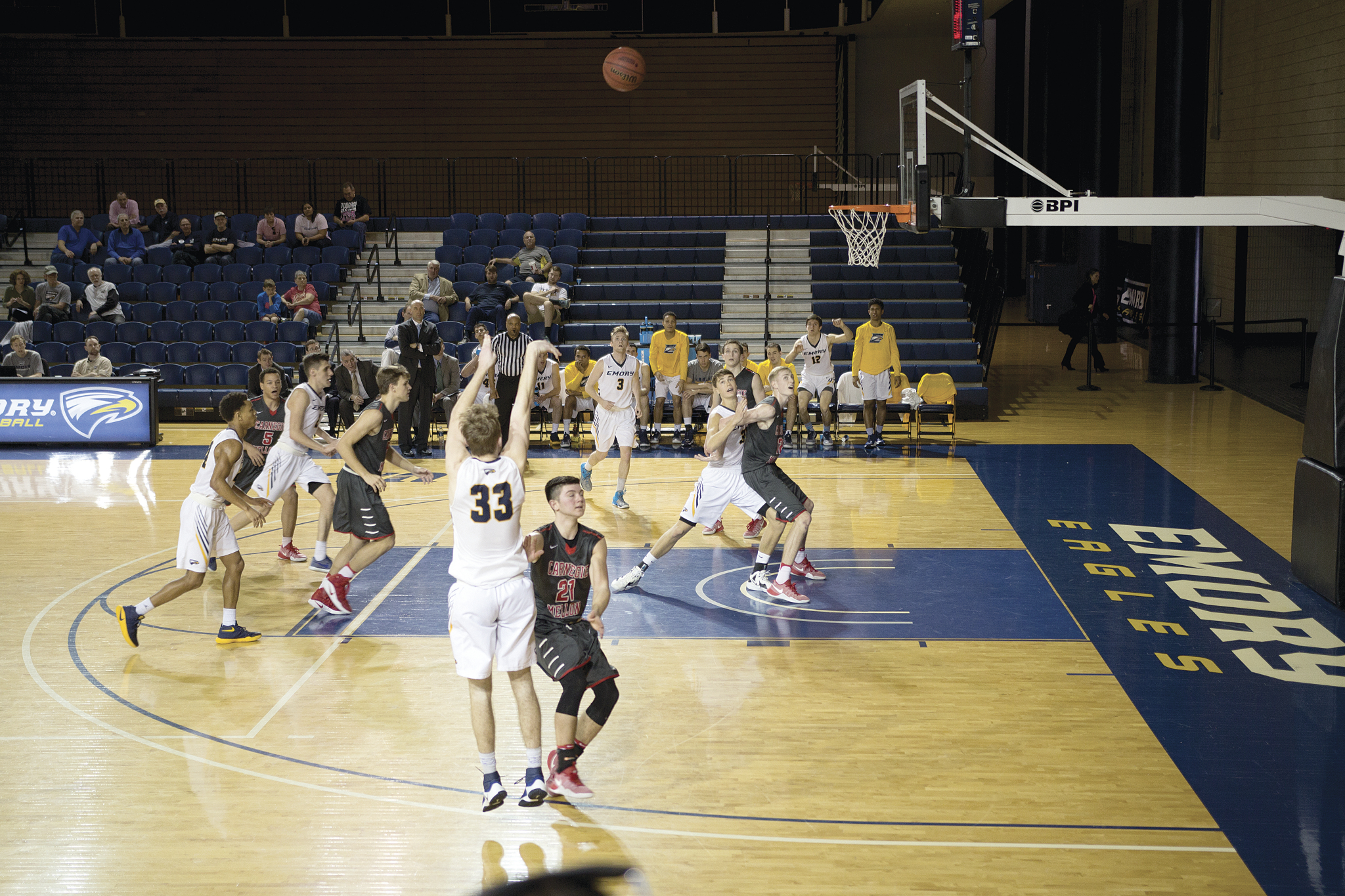 Senior forward Jim ‘the commissioner’ Gordon lines up a three in the Eagles’ game Sunday against Carnegie Mellon. Gordon combined for 55 points over the two weekend games. Photo courtesy of Matthew Hammond/Photo Staff.

Returning to the WoodPEC after an arduous hiatus from UAA road play, the Eagles capitalized by pocketing close wins over Case Western Reserve University (Ohio) Friday and Carnegie Mellon University (Pa.) Sunday. The complete weekend brings the Eagles’ win streak to three and improves their record to 17-7 for  the year. This jumps them back ahead of Carnegie Mellon to the No. 3 spot in UAA standings.

Starting Friday, the Eagles did something they haven’t done often this season: take an early lead. With a three-point make from senior forward Jim Gordon on the team’s first possession, Emory took control of the game early and held a slim lead through the game’s initial stages.

The tide soon shifted as Case Western gradually pulled ahead to a nine-point lead at the half. Case Western senior guard Javier Alvarez and freshman forward Sam Hansen were  averaging 10.3 ppg and 6.8 ppg respectively before the game, but each inflicted significant damage with 11 points apiece in the first half.

“They scored on 11 of 14 [possessions] down the stretch of the first half and we can’t let that happen,” Head Coach Jason Zimmerman said. “We call that a flood. We just can’t allow that to happen.”

However, in what is becoming a regular occurrence for this Eagles team, Gordon played with an energy and an intensity that kept the Eagles within striking distance despite a difficult shooting night for most of the squad. With 16 points in the first half and another 10 in the second, Jim ‘the commissioner’ Gordon was the hero Emory needed Friday night, but maybe not the hero the team deserved.

Down 75-84 with fewer than five minutes remaining in regulation, buckets from junior forward Adam Gigax and sophomore guard Gebereal Baitey helped the Eagles claw back to an 85-all tie at the buzzer.

In overtime, the Eagles took control, taking advantage of an overly-active officiating crew by driving the lane and putting themselves on to the free throw line. Seven points at the charity stripe helped push the Eagles ahead of Case Western for a scrappy 99-92 victory.

Sunday, the Eagles provided the WoodPEC crowd with one of the team’s most complete performances on the year. Emory and Carnegie Mellon traded punches through the first half, but Emory’s balanced scoring attack built a steady lead. With an impressive put-back from sophomore guard Spencer Osborne at the halftime buzzer, the Eagles brought a 39-31 advantage into the locker room.

Refusing to let up in the second half, the Eagles pounded away against Carnegie Mellon’s defense. Another strong showing from Gordon (25 points), Baitey (11 points) and junior forward Christopher Avant (18 points) kept the Carnegie Mellon Tartans at bay.

“I didn’t foul,” Avant explained. “In the past, fouling has kind of taken me out of my game. When I am not fouling I can play my game and be strong inside and score.

In what may have been the game’s turning point, Zimmerman received a technical foul after he expressed significant displeasure towards the officials’ treatment of an altercation between Gordon and Tartan senior forward Jack Serbin, sending Serbin to the free-throw and cutting the Eagle lead to five points with 11 minutes to play.

From that point forward, it was all Emory. The Eagles outscored the Tartans 29-19 throughout the remainder of the game, securing a solid 88-73 home win.

“[The technical foul] definitely energized me,” Gordon said. “It was a result of my play – the guy hit me – so I was definitely a little more hungry after that.”

The weekend’s results largely mirrored what happened all season, with the Eagles struggling to get results in their Friday night matchups before returning Sunday with much better performances.

“It has been weird this season,” Gordon said. “We have come out a little choppy on Friday nights, but Sunday we are good about gathering energy. Whoever wants it more on Sunday usually wins.”

Emory will conclude regular season play when they welcome Rochester University (N.Y.) (21-3) to the WoodPEC next Saturday at noon. The Eagles’ final game offers a chance at redemption following Rochester’s lopsided victory in Emory’s UAA opener back on Jan. 7.