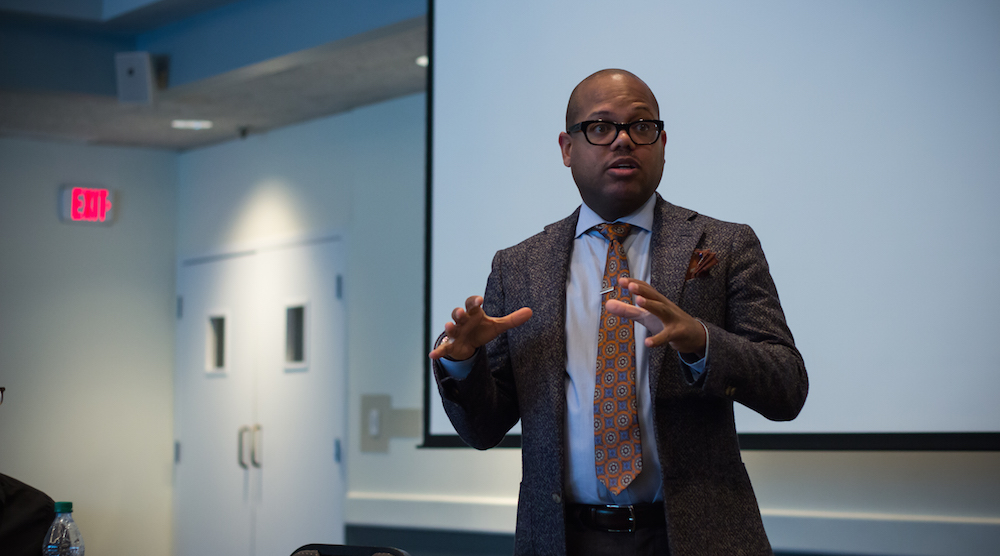 Senior Director of Debate at the Barkley Forum discussed Emory’s food service contract at a meeting on Monday evening. | Photo by Hagar Elsayed

A small but passionate crowd of about 25 Emory students, alumni and employees gathered in Winship Ballroom on Monday evening to discuss the University’s upcoming decision regarding their food service contract. The talk, organized by Emory Students and Workers in Solidarity (SWS), examined the choice — between Sodexo, the University’s current food provider, and the California-based Bon Appétit — as well as the cultural questions it raises, both on campus and across the nation.

The event was moderated by Ed Lee, senior director of debate at Emory’s Barkley Forum, and immediately launched into an extended history of the criticism leveled at Sodexo.

SWS formed in 2010 in response to workers’ complaints that the University’s food contractor had been named in human rights reports, interfered with workers’ freedom of association and denied workers’ access to health insurance.

Ross Gordon (‘13C), an employee of the Barkley Forum — a group that aims to encourage campus debate — laid out the SWS mission statement early in the talk: “Sodexo should not be the food service contractor at Emory, because of what they’ve done and their international practices.”

A lengthy dialogue ensued, splitting the audience into three factions to discuss the larger issues of wealth inequality in America.

“It’s difficult for us to have a conversation about what’s going on at Emory without talking about the issues that are going on in the global and national economy,” Lee said.

As the groups reconvened, the conversation shifted to personal anecdotes of interactions with Sodexo employees and managers. Neil Shulman (‘71M), an associate professor in the School of Medicine, kicked off the group discussion by recalling the Emory of his youth. “In 1967 … when summer break came, they’d find the cafeteria workers other jobs on campus. Everyone had health insurance. That’s not the case today,” he said.

The fact that Sodexo employees do not get health insurance was a common complaint among the audience. Shulman told tales of several food workers stricken with medical conditions who refused to take a medical leave for fear of being fired.

Lance Powell (‘11C), a Michael C. Carlos Museum employee, spoke of his first experience with SWS as an undergrad and the racial undertones of wealth inequality.

“This situation resonates with me as a black person, because I’d go through campus hearing stories of people who looked like me, trying to make an honest living,” Powell said. “They couldn’t get 15 minutes off to see a doctor.”

The students in attendance, even those not affiliated with SWS, were vocal in their agreement with the organization and their condemnation of Sodexo.

The talk ended with a discussion of how to mobilize the Emory student body in support of their food workers.

“It’s striking to me that students are willing to stop and watch fire-breathing, but we can’t take a minute out of our day to talk about real issues,” College sophomore Andrew Jones said, referring to the Dooley’s Week festivities that took place outside Winship during the talk.

Students discussed the relationships that they formed with Dobbs University Center (DUC) food workers, claiming that the Sodexo employees were as much a part of Emory as any full-time professor or student. SWS members stressed face-to-face contact as invaluable, a way to humanize the workers that are most affected by Emory’s looming contract decision.

“It’s life or death,” Jones said. “You don’t leave members of our community hanging on a thread. This is not how you treat a family member.”

Correction (4/11 at 7:38 p.m.): In the ninth and tenth paragraphs of the article, Lance Powell’s last name was misspelled.