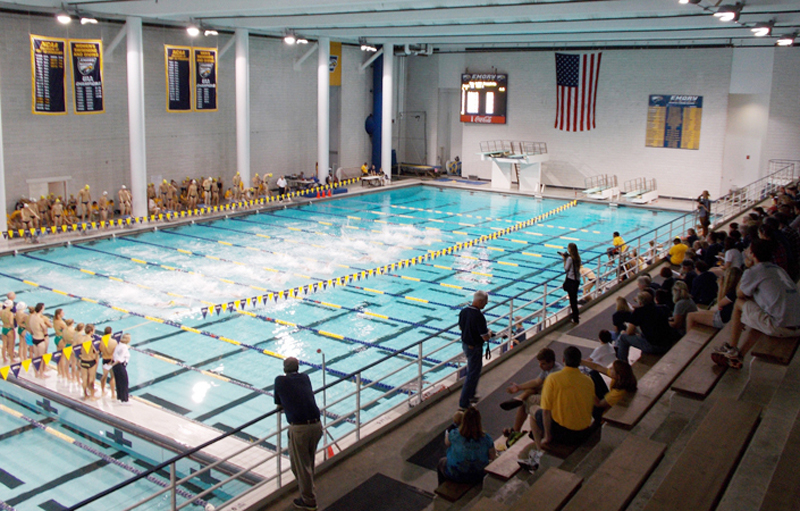 This past weekend, the men’s and women’s teams competed in the 2014 University Athletic Association (UAA) Championship meet, which was held at home in the Woodruff P.E. Center (WoodPEC).

Scores will be delivered once these missing teams have their meet this upcoming Saturday and Sunday in Cleveland.

The meets will combine scores to determine winners.

Despite the weather inconvenience, both Eagles squads turned in strong performances.

For the women, senior Sarah Greene had an excellent performance on both days, earning all-UAA honors and first place with her score of 464.00 points in the one-meter dive.

The Eagles especially stood out on the 800-yard freestyle relay, as the women broke the conference record at the meet as freshman Marissa Bergh, sophomore Carolyn Bonfield, junior Nancy Larson and senior Courtney McDermott finished in first place with a time of 7:29.02.

In the 200-yard freestyle relay, freshmen Claire Liu and Bergh and juniors Dana Holt and Larson won first place with a time of 1:33.83.

Freshman Annelise Kowalsky had an impressive UAA debut as she won the 200-yard IM with a time of 2:03.31 as well as the 100-yard breaststroke, with a time of 1:02.94. This was a conference meet record.

Spock, Wilson, Bass and junior Hayden Baker earned another UAA record in the 400-yard medley relay with a time of 3:18.18.

“There was a group of swimmers who definitely stepped into a new level of competition,” Heil said.

“They dropped so much time that they really separated themselves out from the crowd. Freshmen in particular.”

Final scores and victories will be official after the completion of the UAA Satellite meet, which will be held at Case Western.