Swimmer Stars In and Out of the Pool 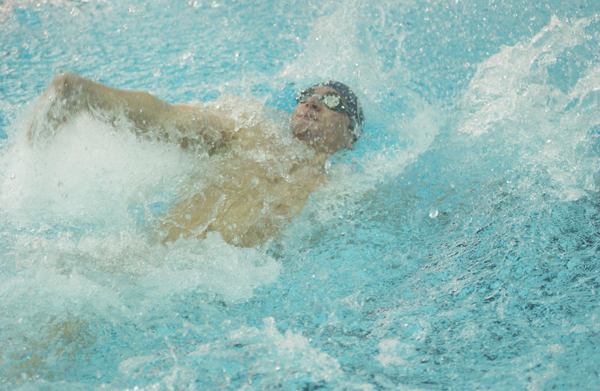 It’s 10 p.m. and Richard Upton is jumping into his roommate’s car to race to the airport. The College sophomore’s flight to Ohio for a swim meet leaves at 10:30. Upton’s luggage, along with the rest of his team, is already in Ohio.

At 10:22, his coach texts him, asking if he is on the plane yet. He is not. He is running through the terminal instead. And he’s still wearing his concert tuxedo and dress shoes from the violin concert he just finished.

Upton, now a College senior, is in the process of completing a double major in biology and music, getting ready to apply to dental school and planning a full violin recital in the spring – all on top of rigorous training in the pool to prepare for Emory Swimming and Diving’s 2012-2013 competition season.

Swimming has always played a significant role in Upton’s life. He started the sport very early; making a splash at the age of five, he joined his local club swim team and continued swimming throughout high school. He had a very successful high school career, winning his high school’s Swimmer of the Year award. In 2009, Upton earned the title of state champion by winning the 100-yard breaststroke at the state finals.

Upton’s accomplishments swimming for the Eagles have been just as impressive. He qualified for the National Collegiate Athletics Association (NCAA) National Championship meet in both 2011 and 2012 for the 50-yard freestyle and 200-yard freestyle relay, and is looking forward to attending again this year. Both years he was named a College Swimming Coaches Association of America (CSCAA) Scholar All-America, and in 2012 he earned All-American honors for his second-place finish 200 freestyle relay at the National Championship meet. In 2011, he earned All-America Honorable Mention honors for his performance in the 50 freestyle at Nationals.

“I think he is set up to have a real breakthrough year in the pool,” said swim team Head Coach Jon Howell. “It’s going to be fun to see all the work he has put in the last few years pay off.”

As a sprinter, Upton’s primary goal in the pool is to get from wall-to-wall while maintaining top speed the entire race. The yardage for a sprinter in practice and meets is shorter than medium and long-distance swimmers, but the rapid intensity of the shorter races is not something every swimmer is built for. Upton’s best sprint events are the 100-yard breaststroke, 100-yard freestyle and 50-yard freestyle.

“They are just the most fun to me,” Upton said. “I like going fast. I live for racing.”

When he is not racing, Upton spends his time working towards his biology and music majors. After graduation, he is planning on taking a year off to take the Dental Admission Test in September and apply to dental schools in November. During the gap year, he plans on gaining field experience by shadowing an oral surgeon in the Atlanta area.

As for his music major, Upton has a full recital in the works for early April and will be performing pieces from Bach, DvoÅ™Ã¡k, Beethoven and Paganini. He is primarily a violin performance major, but he also plays the piano. In conjunction with his music theory training, Upton has arranged 10 musical compositions, ranging from the 18th century to present day and composed seven original pieces, including piano pieces and full orchestral works. He has been a member of the Emory Symphony Orchestra throughout his career at Emory and is a student of Jessica Wu of the Vega String Quartet.

“Richard is a very passionate and dedicated musician,” Wu said. “I personally think his swimming actually helps his breathing and body control when he plays the violin.”

Balancing school, music and swimming can be tough, but Upton insists that it all comes down to time management. In high school, he said, it used to be difficult to schedule rehearsals around swim meets and practices. But at Emory, Upton insists that coaches and professors recognize that many students are committed to multiple activities on campus and are generally very understanding.

Despite all of his commitments on campus, Upton still finds time to give back to the community. He participates in a Bible study on Monday nights, and on weekends when there are no swim meets, he volunteers at SafeHouse Outreach, a local homeless and youth outreach center.

For fun, Upton prefers low-key activities like going out with friends or attending the swim team’s weekly Friday team dinners.

“It is a nice way that we get to connect with the underclassmen,” he said. “During practice, you can’t really talk because you are usually out of breath. It’s great because you get to do your senior thing and see how everyone is doing.”

As his coach of four years, Howell says he has seen Upton establish himself as a leader on the team.

“He is always positive about what he is doing,” Howell said. “His enthusiasm is definitely contagious. He is one of those kids that bleeds Emory and loves being here.”

When choosing where to attend college, Upton said he needed a school that would give him the freedom to study biology, practice the violin and compete in his sport without having to make compromises. After four years, he said he knows Emory was the right choice.

“I wanted to do all three, and Emory had it all,” Upton said. “I’m so happy with my decision. I love this school.”