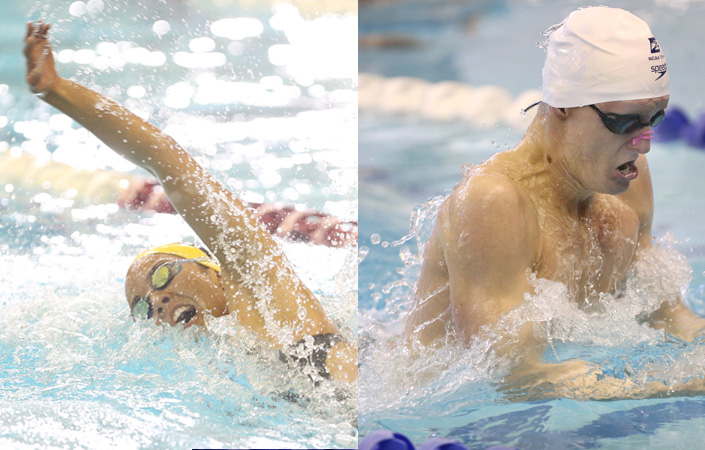 The Emory men’s and women’s swimming and diving teams were awarded the University Athletic Association Team Champions for the eighteenth straight year on Saturday night at the 29th Annual UAA Championships in Webster, New York. The Eagles finished the four day meet with an astonishing seven UAA records, 45 All-UAA certificates and 18 event championships.

The women’s swimming and diving team coasted to an easy victory, beating second-place Washington University in St. Louis (Mo.) by 685.5 points over the course of the competition. The Eagles finished with 2,015 points, Washington University came in second place with 1,329.5 points and the University of Chicago (Ill.) came in third place with 1,319 points. The victory was the women’s team’s twenty-fourth UAA Championship of all time.

The men’s swimming and diving team also handedly won their series of races. The Eagles finished with 1,595.5 points, while their closest competitor, Washington University in St. Louis, finished 151.5 points behind Emory, good for second place. New York University finished in third place with 1,305.5 points. The victory was the men’s team’s eighteenth UAA Championship of all time.

A large number of Emory swimmers and divers were also given individual awards throughout the four days of competition.

Senior Elizabeth Aronoff set a UAA record by topping her own previous mark, with a time of 2:15.67 in the 200-meter breaststroke. Additionally, the team of Muir, junior Marcela Sanchez-Aizcorbe, Cheng, and freshman Meg Taylor obliterated the UAA record for the 400-meter freestyle relay with a time of 3:22.71.

In addition to all-UAA honors, two men swimmers won first place individual championships on the last night of competition. Senior Jared Scheuer won the 200-meter backstroke with a time of 1:49.38, and freshman Thomas Gordon won the 1,650-meter freestyle with a time of 15:36.56.

The Eagles’ next meet will be for a select few chosen to compete in the NCAA Division III Championships from March 16-19 in Greensboro, North Carolina.