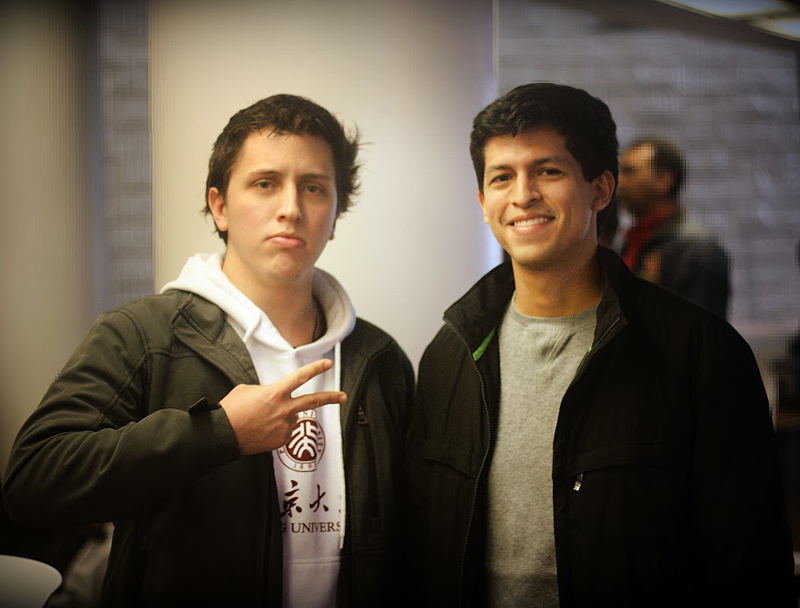 College juniors Giorgio Boza and Javier Gallegos are two students who believe in their ability to create a positive change for those less fortunate. Growing up in Lima, Peru, they learned from a young age about the issue of poverty and recognized their privilege of being born in financially stable families. However, they realized the extent of the help they could offer to others only after moving to the United States and gaining a new perspective on their previous life in Peru.

“Before I moved to the United States, I would always look at slums like Pamplona and think ‘man, it makes our city look so bad,'” Boza said. According to him, moving to a new country and attending a very diverse school like Emory were crucial ways to make him change his perspective.

“Everything started with an ambition to improve our country,” Gallegos said. “We are both patriotic.”

The two began discussing about working together on a potential project as early as their freshman year. Both had a special interest in education and the beneficial changes it can bring. The discussions were fructified in January 2013, when the two, with the help of College juniors Andrea Simon and Izzi Lynn, founded Education Against Poverty, a nonprofit organization aimed at providing help to Peru’s underdeveloped education system.

Boza said they were lucky to have great people interested in getting involved.

“We received help from my fraternity, Zeta Beta Tau (ZBT), and then we literally had to go from door to door to collect donations, Boza said. “We ended up with about $1,500.”

Their first project in the summer of 2013 was aimed at helping La Rinconada, a small community within the slum of Pamplona, an area on the outskirts of Lima with a population of 70,000.

Boza and Gallegos arranged a project for the only pre-school in Pamplona, El Nido Trebol Azul, which hosts about 60 children. This pre-school was in desperate need of a septic system, since its conditions were unacceptable, with only one toilet for 60 children and no viable sanitary system to back it up.

According to Boza and Gallegos, poor families come to the arid area of Pamplona from rural areas of Peru and build houses without the involvement or the support of the government. Their movement to this region is often called “the invasion,” because a large number of people seize these barren lands. However, the government does not take responsibility for them or their houses and land.

Gallegos recounted that on the outskirts of Pamplona there is a wall called “el muro de la verguenza,” or the “wall of shame.” It drastically separates the poor region of Pamplona from some of the most affluent neighborhoods in Lima. The wall represents a physical separation as well as a separation on a deeper, more mental level. People on each side of the wall regard the ones on the other side with much animosity.

Gallegos also mentioned the sanitary conditions in Pamplona, which are almost unimaginable. The area is surrounded by chancherÃ­as, places where people throw their garbage and pigs are let free to feed on the waste. Later on, the inhabitants eat the pigs. This cycle creates massive health problems for the residents, and many cases of tuberculosis, especially in infants, are constantly being reported.

“We are not a poor, undeveloped country,” Boza said, “but we still have these horrendous gaps in the society.”

For the pre-school El Nido Trebol Azul, the organization helped build a septic tank, provided a refillable water tank and electricity, and also built two new bathrooms and a place for the children to wash their hands.

They initially encountered opposition from inhabitants who did not understand that the organization’s purpose was beneficial for their community and their children. Boza and Gallegos were perceived negatively as the rich kids of Lima, who had unlimited reserves of money.

“At first, I was a bit disappointed because I expected them to be thankful for what we were doing, but we received no thanks whatsoever,” Boza said.
Gallegos dissented saying that the inhabitants of La Rinconada might have not realized the importance of the organization’s work, since they never before experienced such infrastructure as they had just been offered. Because they came from extreme poverty, he said, they just did not see the value of a good sanitation.

The same summer, Education Against Poverty also built a park in La Rinconada to provide an “oasis in the desert” for the inhabitants of the area. The organization worked with children from a private school in Lima to help the group’s efforts to create the park.

Boza and Gallegos are planning to return to Peru within a few months. They are looking into helping the region of Huaraz, a still underdeveloped tourist area that they feel displays great potential.

The group is also in the works of providing help to two siblings from Trebol Azul, Janet and Dennis, who were born with Syndactyly, a condition where two or more digits in the hand are fused together at the skeletal level. Boza and Gallegos were able to find a nonprofit organization that would fund the children’s surgeries in Lima, and they look forward to seeing the two siblings cured.

“Everything we do is for the children,” Gallegos said, “so that they might have a chance for a better future.”