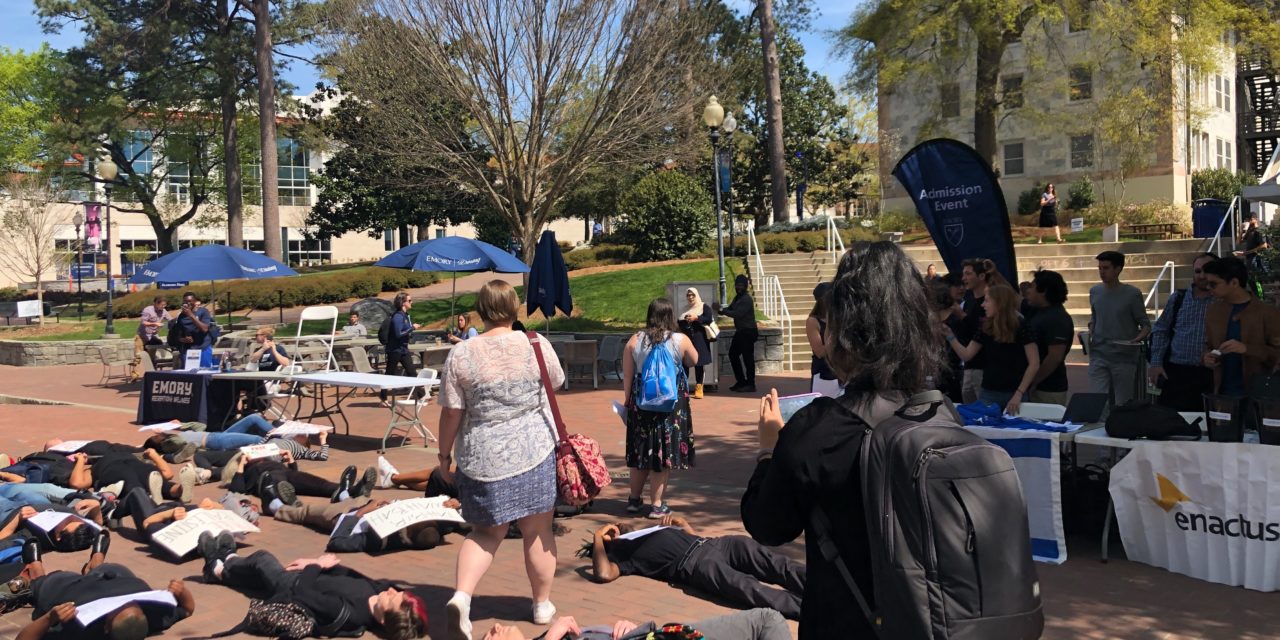 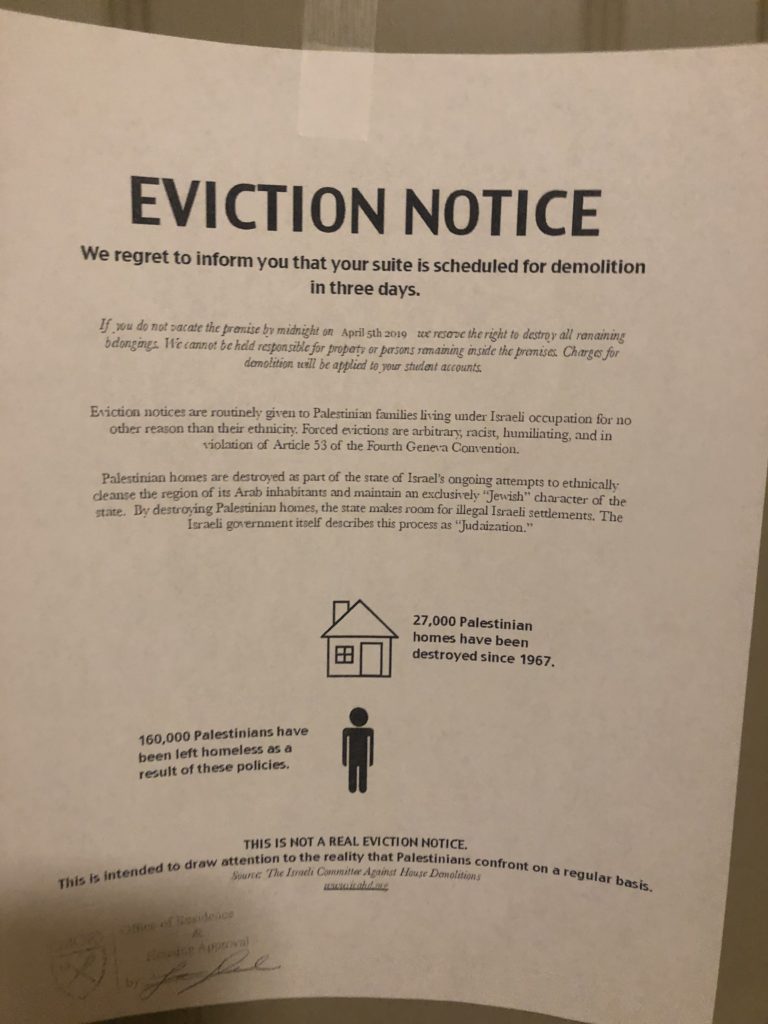 Emory’s Office of Student Conduct is conducting an investigation after many students found mock eviction notices posted to their doors on Tuesday morning.

The flyers were posted throughout residence halls, Clairmont Campus and Emory Point. They warn that the rooms are “scheduled for demolition in three days.” The bottom of the notice states that it is not real but is intended to “draw attention to the reality that Palestinians confront on a regular basis.”

Allison Padilla-Goodman, regional director of the Anti-Defamation League Southeast, wrote in an open letter to University President Claire E. Sterk on Thursday that the mock eviction notices are “disturbing.”

“While students have a right to express their views on campus, targeting students in their residence halls is an unsettling intrusion,” Padilla-Goodman wrote. “We appreciate that Emory’s administration has recognized the impact of such hurtful actions, and we urge you to take steps to reassure students that their personal space is secure.”

The Office of Residence Life and Housing Operations approved the fake eviction notices to be posted around Emory’s campus but staff removed the flyers from students’ doors because distributors violated Campus Life’s policy against posting flyers on doors.

In an April 5 statement, ESJP wrote that alt-right blogs and anti-Muslim hate sites have “intimidated students with frivolous legal actions; engaged in aggressive cyber-bullying; [and] sent death threats and threats of violence” in response to their distribution of mock eviction notices. ESJP called on the University to “discipline students and other Emory community members that are complicit in the ongoing harassment” and discouraged the endorsement of Emory’s Jewish student organizations during this time.

Emory Police Department (EPD) Records Manager Ed Shoemaker said the department received multiple complaints about the flyers. EPD is gathering facts about the case, according to Sgt. Ryan Andrews. He did not clarify by publication time whether there is an active criminal investigation.

Zalman Lipskier, executive director of Chabad at Emory, informed Chabad members via email that a “high profile” lawyer is willing to represent students if they feel threatened.

Juliana Nikodym (17Ox,19C), who attended an ESJP-hosted lecture on Wednesday, said she was impressed by the mock eviction notices.

“I thought it was a really good, powerful demonstration,” Nikodym said. “It’s not supposed to be comfortable.” 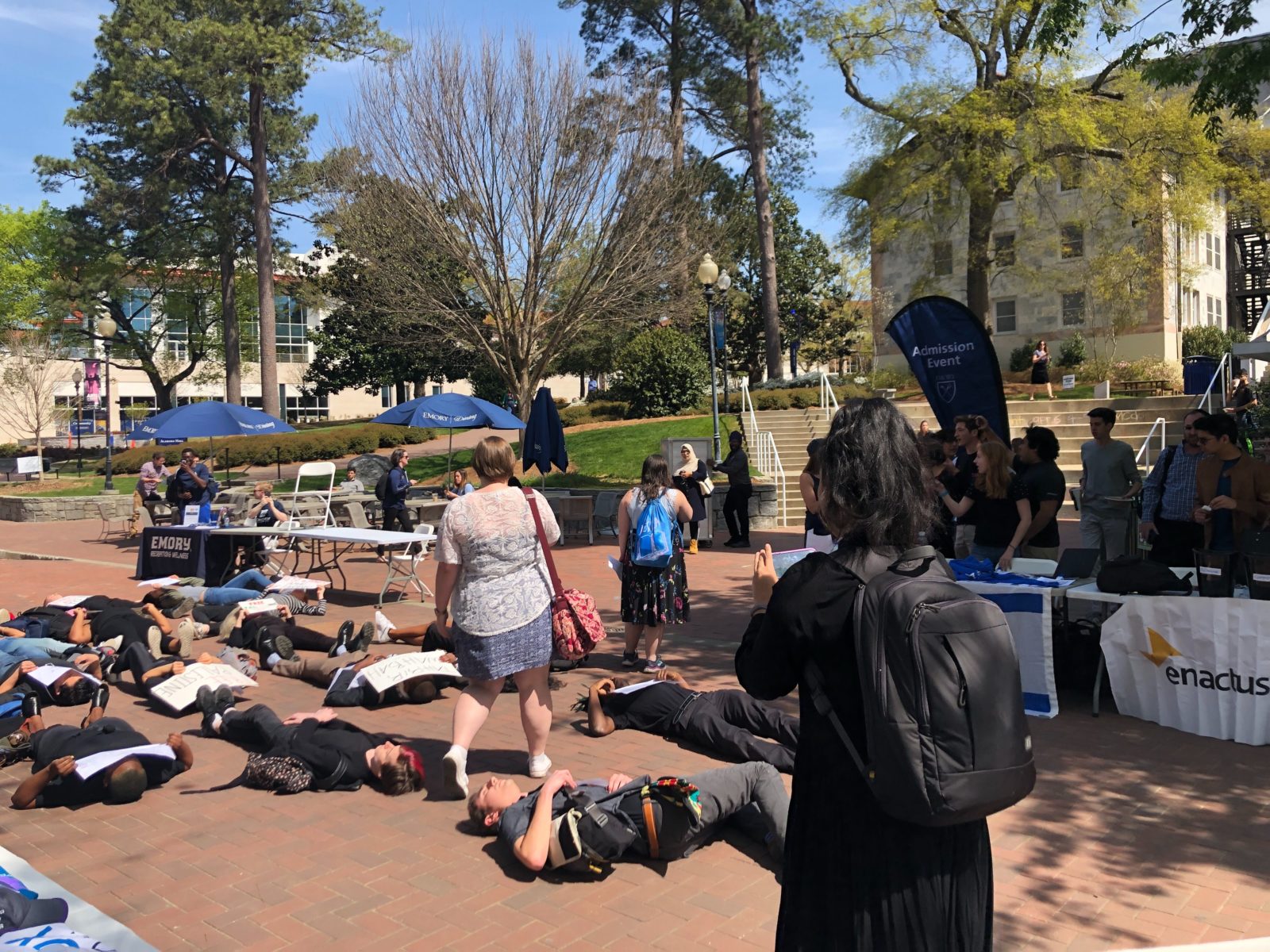 As part of Israel Apartheid Week, ESJP held a “die-in” on Cox Bridge on Wednesday. The silent protest occurred during Wonderful Wednesday, where Eagles for Israel was also tabling.

“The die-in happened right in front of us and they came to interrogate our table with all of these pictures and give us these terrible looks,” said Sophia Weinstein (19C), co-president of Emory-Israel Public Affairs Committee. She added that ESJP also protested next to Eagles for Israel when they held an event earlier in the week.

Vice President of Eagles for Israel Melissa Harari (19B) said she was invited by an ESJP member to attend a lecture hosted by pro-Palestine group on Tuesday but was shunned when she invited their members to discuss the Israeli-Palestinian conflict with her.

“I just broke down because it was so much to handle hearing their rhetoric and how they talk about Israel [and] … how they compare it to racist apartheid,” Harari said. “They don’t want to talk, and they frame themselves as the people starting the conversation.”

Harari said she has no issue with the violations to campus flyer posting guidelines but said Emory should reform its free speech policies to prevent hurtful attitudes.

In an email to students, Interim Vice President for Campus Life Paul Marthers said Campus Life is investigating the incident and has engaged with ESJP.

“While we want to create an environment where the free expression of ideas and open, vigorous debate and speech are valued, we must also recognize that the manner in which we communicate can have consequences,” Marthers wrote. “My hope is we can learn from this incident to bring together in meaningful conversation the many points of view that are needed to advance our understanding of complex issues in the world.”

“A lot of Jewish students feel threatened, insecure,” Weinstein said. ”They feel nervous that they’re going to be attacked or intimidated by [ESJP] students while walking around on campus.”

Correction (4/5/19 at 8:29 p.m.): A previous version of this article stated that Sophia Weinstein is the vice president of relations for Eagles for Israel. In fact, she is the co-president of Emory-Israel Public Affairs Committee.