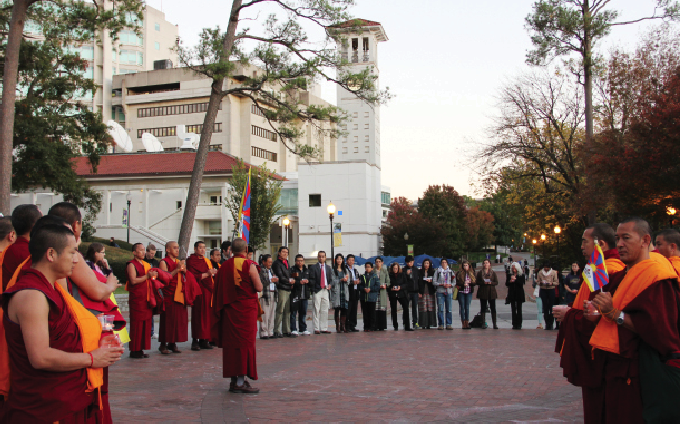 The Atlantan Tibetan community in conjunction with the Students for Free Tibet (SFT) Emory Chapter held a vigil last Thursday to raise awareness about the recent increase in self-immolations taking place inside Tibet.

Approximately 75 students and community members attended, progressing from the Quad to Asbury Circle.

“The organizers called this a contemplative vigil to highlight the necessity for clear thinking and compassionate understanding in resolving this difficult issue and in bringing freedom to the Tibetan people as well as the Chinese people,” wrote Kathryn Breazeale in an email to the Wheel. Breazeale is a College senior who serves as the president of Emory Students for a Free Tibet.

The procession was led by a delegation of 28 monks from the Drepung Loseling Monastery. It began in the Michael C. Carlos Museum Reception Hall, where Locho Rinpoche, a well known Buddhist master visiting from India, led a chant based on a short verse of Buddhist prayer pleading for bodhicitta, the enlightenment of the mind. Following the prayer, the monks, accompanied by students and community members, slowly made their way towards Asbury Circle. Each held a single candle.

“The solemn walk through the campus in the cold dusk with candle flames flickering and dying may be representative of the situation inside Tibet: somber, dark, uncertain, shivering,” wrote Tibet Science Initiative interpreter Tsondue Samphel in a reflection on the event.

Self-immolation as a form of protest is itself nothing new, with modern incidents dating back as far as 1963, when Thich Quang Duc immolated himself in Saigon to protest the ongoing persecution of Buddhists.

The present string of self-immolations, however, began in the wake of a young monk in western China burning himself in a busy marketplace. Since then, 61 more Tibetans have immolated themselves, 52 of whom died. In recent weeks, the crisis has reached a breaking point, with 10 Tibetans immolating themselves in the last month alone.

“With choked, muffled, breathless, smoke-filled voices, they urged the Chinese government to allow the Dalai Lama to return to Tibet, give freedom to the Tibetan people and let them live in happiness,” read a promotional poster for the event. “Instead, the Chinese government violently suppresses its ‘own people’ with stricter measures, harsher policies and increased incarceration.”

At the procession’s conclusion, a Tibetan parliamentarian in exile led a final song, whose lyrics were drawn from the final messages left behind by those who chose to immolate themselves in protest.

“I am giving away my body as an offering of light to chase away the darkness, to free all beings from suffering,” one monk had written prior to his self-immolation on Jan. 8.

In the silence after the melancholic song, the crowd began to slowly disperse. The flames had died, and the monks were silent, but the echoes followed them home like ghosts.

– By Will Partin III