It’s time for a walk out. On December 4th, do not sit in class. Come to the quad at noon. If you are teaching a class, bring your class. Atlanta media will be there. Department heads and dozens of graduate students and their classes will be there. We will have music, board games and punch and pie to enjoy until our demands are met. Emory University, like any corporation, needs public relations. A successful walkout will make Forman and Wagner look bad. It will create the pressure necessary to reverse the cuts, and it will make a national AAUP censure that much more likely.

A walkout is necessary because Wagner and Forman do not consider themselves answerable even to department heads, much less students. ‘Dialogue’ for them means telling the Emory Community what is going to happen and us accepting it.

They do not care about your opinion, whether you are a freshman undergraduate or the Chair of the ILA, which is why they did not ask you about their decision before they made it.

Wagner’s response to the SRC letter is only meaningless noise. To take but one example: he doesn’t think we should worry about eliminating the profoundly diverse education department because ‘diversity should not be dependent on one department.’ This is a bit like murdering the only doctor on a desert island because “we should not be dependent on one person for medical knowledge.” The reality is the Education department is our best connection to Atlanta schools and our best hope of retaining minority and female graduate students.

Wagner’s philosophy for the cuts is “cut inferior, boost superior.” But what is superior?

Wagner won’t tell. Diversity, critical thinking and a pattern of improvement are considered superior by many, but not by Wagner. I don’t think even he knows what he means by superior.

All these contradictions are not a coincidence. The real, unstated reason for the cuts is undeniably university rankings.

The ironic part is Forman and Wagner’s strategy will fail to improve our rankings. US News and World Report is a fickle mistress – there is no guarantee they will like Twitter and China more than art, languages, economics and diversity.

Wagner and Forman have submitted no data and no evidence that would support the prediction of a rankings boost. The choice to narrow a University away from the liberal arts and towards science and technology is ambiguous for rankings – it works for some colleges (extremely prestigious and specialized tech schools) and not at all for others.

A walkout is necessary, in the final analysis, because the cuts will make Emory a much worse school. I understand science is hard. That is why a diverse and critically engaged campus is necessary to cross-pollinate the scientists.

China studies are indeed important; they could also be totally funded by downsizing the excessive landscaping budget. Or we could dip into the unexpected $102 million our endowment made last month, almost twenty times the value of the cuts.

It’s not unreasonable to imagine the loss of alumni dollars will approach the total value of the cuts (6.5 million), as several alumni from affected departments have already threatened to withhold over $100,000.

Many students who would have majored in an affected department will transfer or not enroll. The perception that Emory is going downhill is palpable almost no matter whom you talk to.

As a student who benefits from the academic environment of Emory, you have a responsibility to defend it. Tell your friends. Tell your professors. Do not skip the walk out.

David Mullins is a member of the Student Re-visioning Committee.

Reflections On My Stolen Bike 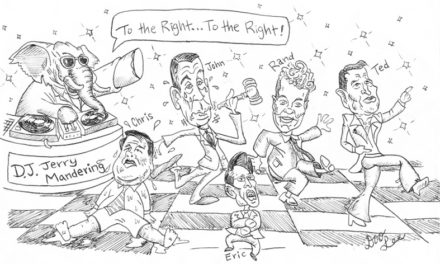 Gerrymandering Will Hurt GOP In the Long-Run

Our Opinion: Where in the World Is Dooley?