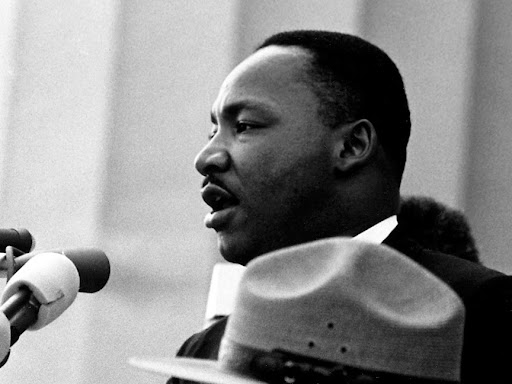 In January, Audric Donald (23N) accepted one of his first awards in his life at the Martin Luther King, Jr. Community Service Awards hosted by the Rollins School of Public Health. In his acceptance speech, Donald celebrated his achievement with a quote from King: “If I cannot do great things, I can do small things in a great way.”

Dr. Martin Luther King, Jr. giving his “I Have a Dream” speech during the March on Washington DC. (Courtesy of Wikimedia Commons/Rowland Scherman).

Donald said that the quote holds two important messages for him.

“I’m still a student, I’m still learning, but the small things I do can trickle up and make a great impact in the community that I’m serving,” Donald said. “Everybody had to start from somewhere. Small things build up into great achievements.”

In 1993, Dr. Joyce Essien and Dr. Ray Greenberg, then dean of the Rollins School of Public Health, planned an award ceremony to honor the legacy of King and encourage social justice in the community.

“We didn’t have [an event] that recognizes Emory out in the real world and the work that was going on to make Atlanta a better place,” Greenberg said. “We thought that this would be something that we, as the School of Public Health, should embrace.”

Now, in the 30th year of the event, many in the University community have embraced Eissen and Greenberg’s mission. The Goizueta Business School, Emory School of Medicine and Nell Hodgson Woodruff School of Nursing have joined as sponsors.

The 2022 awards started with a message from King: “Our lives begin to end the day we become silent about things that matter.”

The first award went to Guido Silvestri, a professor at the Emory University School of Medicine who in June 2020 started a discussion group called “Conversation on Racism” after the murder of George Floyd.

The discussion group continues to meet once a week with increasing participants and guest speakers to facilitate healing and education in the workplace.

Neena Smith-Bankhead, director of the Emory University COMPASS Initiative, received the second award for her personal service outside of her work in the Emory community.

With the organizations SisterLove and THRIVE SS, based in Clayton County, Smith-Bankhead helps to provide HIV treatment to local residents. She also works with Clayton State University (Ga.) to offer opportunities for mentorship and internships for marginalized students.

“It’s an honor to be acknowledged for work that I don’t do for the honor,” Smith-Bankhead said. “I enjoy volunteering, and I enjoy learning. That learning happens in a way that commits back and supports other people.”

In 2020, Smith-Bankhead volunteered for Sen. Jon Ossoff’s (D-Ga.) campaign to inform those who may not know how to vote or access absentee ballots.

“It was something where it was bigger than just the vote,” Smith-Bankhead said

. “It was about people gaining knowledge and understanding.”

Although her first time volunteering on a political campaign, Smith-Bankhead plans to volunteer next election cycle to continue her work of education.

The next award went to Dr. DeJuan White for his work for racial equity at Grady Memorial Hospital and the Emory School of Medicine, where he educates students, medical students, residents, staff and faculty in racial equity through unconscious bias training and discussion groups.

White started his initiative in the spring of 2020 after talking with his colleagues of marginalized backgrounds. The goal of the discussion groups, White said, was to create a more supportive environment among the disparity of minority representation at both educational and clinical levels.

“[I] try to move things from a safe space to a brave space for people to be open to talk about various ideas and opinions,” White said. “We know that silence can continue to foster inequity.”

White grew up in Jacksonville, Florida where he attended Martin Luther King Jr. Elementary School. There, he learned about how King helped minority populations.

“I’m not sure exactly what I said during the award ceremony because I was so overwhelmed with joy, passion and adoration for Dr. King,” White said, “and to have my name associated with some of his work was just truly humbling.”

In the workplace, the group educates their own residents on diversity and inclusion but also recruit underrepresented minority students. During national and state elections, the group also helped patients register to vote and access ballots.

As a member of the nursing school, Donald was the only student to accept an award this year. He switched his focus to nursing during the pandemic, a decision inspired by his own community, he said. Donald and his family attend St. John’s Baptist Church in Hopkins, South Carolina, where the elderly community has suffered greatly from COVID-19.

After choosing nursing, Donald has flourished in his environment. He started honors research with the Faith Village Research Lab to combat dementia in elderly patients through faith-based reminders. As a member of the Georgia Black Nurses Association, Donald works to increase Black student representation in nursing. In his clinicals, he said, he feels stimulated and curious.

“As a nurse, you see the most vulnerable side of people, and I feel the responsibility to be an advocate for that patient,” Donald said. “[Clinicals] are a great experience for me because it taught me to never lose sight of the humanity in patients.”

With his award, he received $250 to donate to a non-profit of his choice. Donald chose to give back to the community that built him up: his church.

Xavier Stevens (23C) is from St. Louis, Missouri, studying English and Creative Writing. Outside of the Wheel, he plays ultimate frisbee with Emory Juice and enjoys listening to Daft Punk and The Staple Singers.