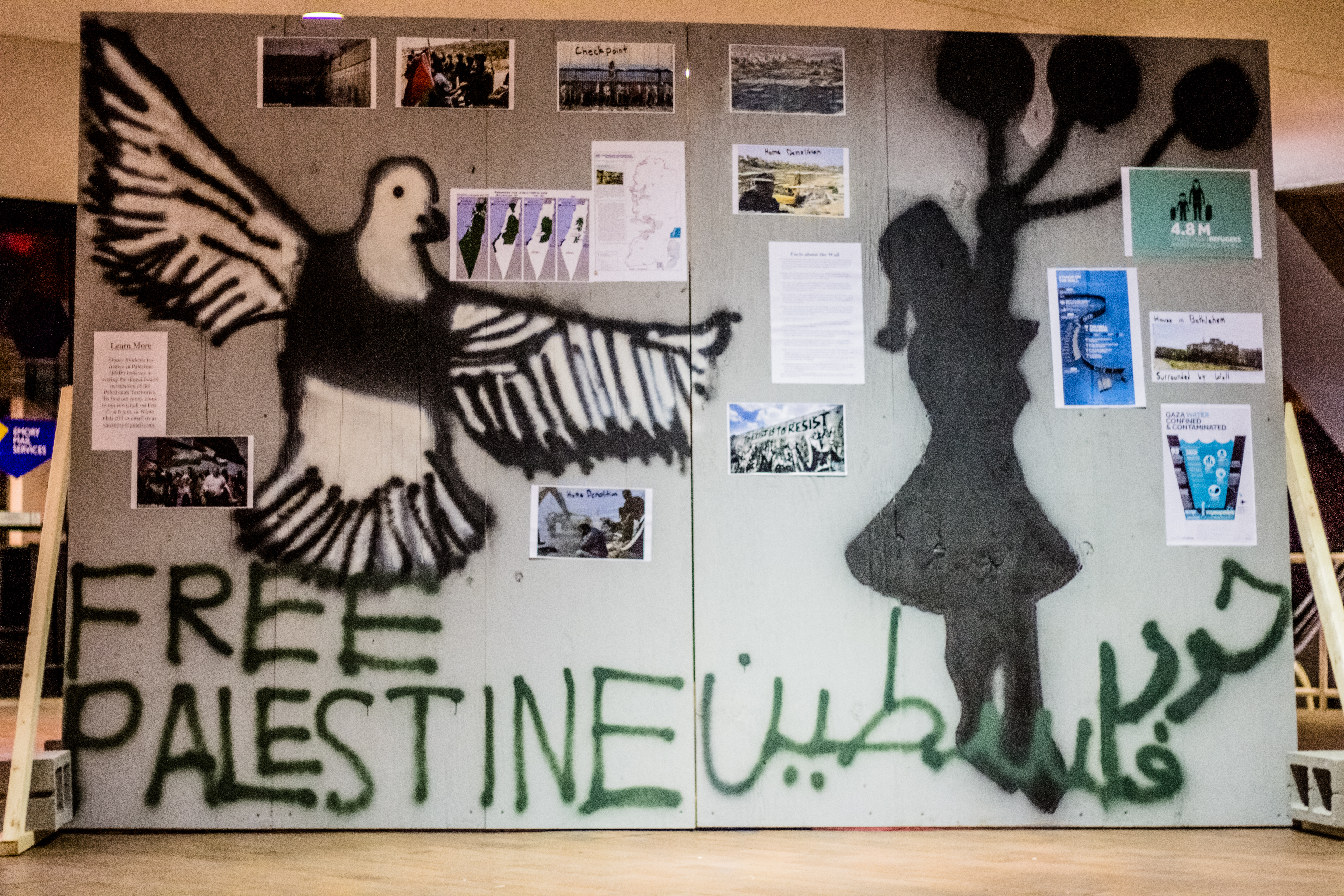 This week, the Dobbs University Center (DUC) has become the center of debate about Israel-Palestine issues as student organizations have placed displays in the student center and have implemented programs on both sides of the conflict around campus.

Emory’s Jewish community and pro-Israel student organizations will hold events this week in response to Emory Students for Justice in Palestine’s (ESJP) “Separation and Annexation Wall,” a wall that aims to raise awareness of human rights violations and the annexation of land in Israel, according to College junior and ESJP Vice President Emilia Truluck.

ESJP’s wall, which is located on the Dobbs University Center (DUC) terraces, represents the Israeli West Bank, a physical barrier created by the Israeli cabinet in June 2002 to regulate entry of Palestinians from the West Bank into Israel, according to BBC News.

The wall contains a diagram depicting the Palestinian loss of land in Israel from 1946 to 2000, and it claims that the wall isolates and disrupts the lives and livelihoods of Palestinians currently living in Israel.

“[Emory students] have a strong obligation to be engaged in the issue [between Israel and Palestine] and to try to move our country to be on the right side of it, rather than enabling the status quo to continue,” College junior and Treasurer/Co-Founder of ESJP Anaïs Hussung said.

As global citizens and American taxpayers whose money is used in Israel without restrictions, Emory students should be aware of these issues, Truluck said.

In an email to the Wheel, College junior and MEOR Israeli Affairs Chair Elyssa Brezel stated that though its members may disagree with the statements made by the ESJP’s wall, the pro-Israeli coalition hopes to create dialogue on Emory’s campus that will allow students to make informed decisions about the state of Israel. She acknowledged the right of ESJP to exercise this right.

Last year, ESJP’s wall was vandalized and torn down. The wall declared Israel an apartheid state, meaning that it racially segregates groups and refers to a system of legislation previously used in South Africa.

The vandalism of last year’s wall should not cause ESJP to stop or compromise its goals, Hussung said.

This year, ESJP did not associate the word “apartheid” with its events nor did it put the word on its wall, according to President of ESJP and College junior Dina Masri.

In an email to the Wheel, representatives from MEOR at Emory, the Emory-Israel Public Affairs Committee, Alpha Epsilon Pi, Hillel at Emory, Sigma Alpha Mu, Emory Students for Israel (ESI), Chabad and the Emory chapters of the historically Jewish fraternities Alpha Epsilon Pi (AEPi) and Sigma Alpha Mu (SAM) noted that though “it is painful … to witness those in [the Emory] community delegitimizing and demonizing the State [of Israel] … it is imperative that [Emory students] do not tear down, vandalize or damage [the ESJP’s] displays.”

The email also acknowledged that the Emory community must continue to recognize Emory’s Respect for Open Expression Policy, which states that the University “supports courageous inquiry through open expression, dissent and protest, while acknowledging the challenges of the creative tensions associated with courageous inquiry in an ever changing community.”

“Although we may not agree with the conclusions [ESJP] has raised regarding the human rights situation in the area, our interjecting points do not hinder us from having an appropriate, respectful relationship,” Brezel wrote, noting that MEOR wishes the same from the broader Emory community.

Masri agreed that she hopes the organizations will be able to create a community that can safely and respectfully discuss the conflicts in Israel.

“College is a place for people to express different opinions and not feel ashamed for having certain opinions,” Masri said, noting that as a Palestinian, she does not always feel entirely accepted on Emory’s campus.

Masri also said that ESJP has extended an invitation to Emory Hillel to co-host an event later this semester through which students can come to learn about both perspectives of the issue, and she is hopeful that the organizations can collaborate in the future.

ESJP will also hold events this week to recognize the issues discussed on its wall, including a town hall event for students to ask questions related to the wall and conflicts in Israel.

Later this week, Jeff Halper, coordinating director and co-founder of the Israeli Coalition Against Home Demolitions, will deliver a lecture on what the conflicts between Israelites and Palestinians will lead to in the future. Hussung said that she hopes students will use these events as well as the wall to directly engage with the issues surrounding Israel.

“One of the things I’m very aware of is that people have very strong responses to [ESJP’s] wall, but they tend to ignore the content that we put on it,” Hussung said, encouraging students to further educate themselves about the conflicts in Israel.

The pro-Israeli coalition will hold events throughout the week aimed at bringing awareness to the issues displayed on  ESJP’s wall, according to Brezel.

On Tuesday, Feb. 23, ESI will hold an event entitled “Soldiers’ Stories,” which will detail the experiences of two Israeli soldiers. On Wednesday, Feb. 24, Chabad at Emory will hold a Chill N Grill BBQ for students to meet and discuss the conflicts in Israel.

Hillel at Emory will sponsor an Israeli Shabbat on Friday, Feb. 26, which will spread panels throughout campus, recognizing Emory’s role and its related challenges.

The pro-Israel organizations will wear blue clothing in solidarity on Tuesday, Feb. 23, have tables at the DUC for Wonderful Wednesday including a humanitarian aid table on Thursday, Feb. 25.

“We are using this week as a new opportunity to bring together the numerous pro-Israel organizations on campus, and we look forward to using this coalition for multiple platforms in the future,” Brezel wrote.