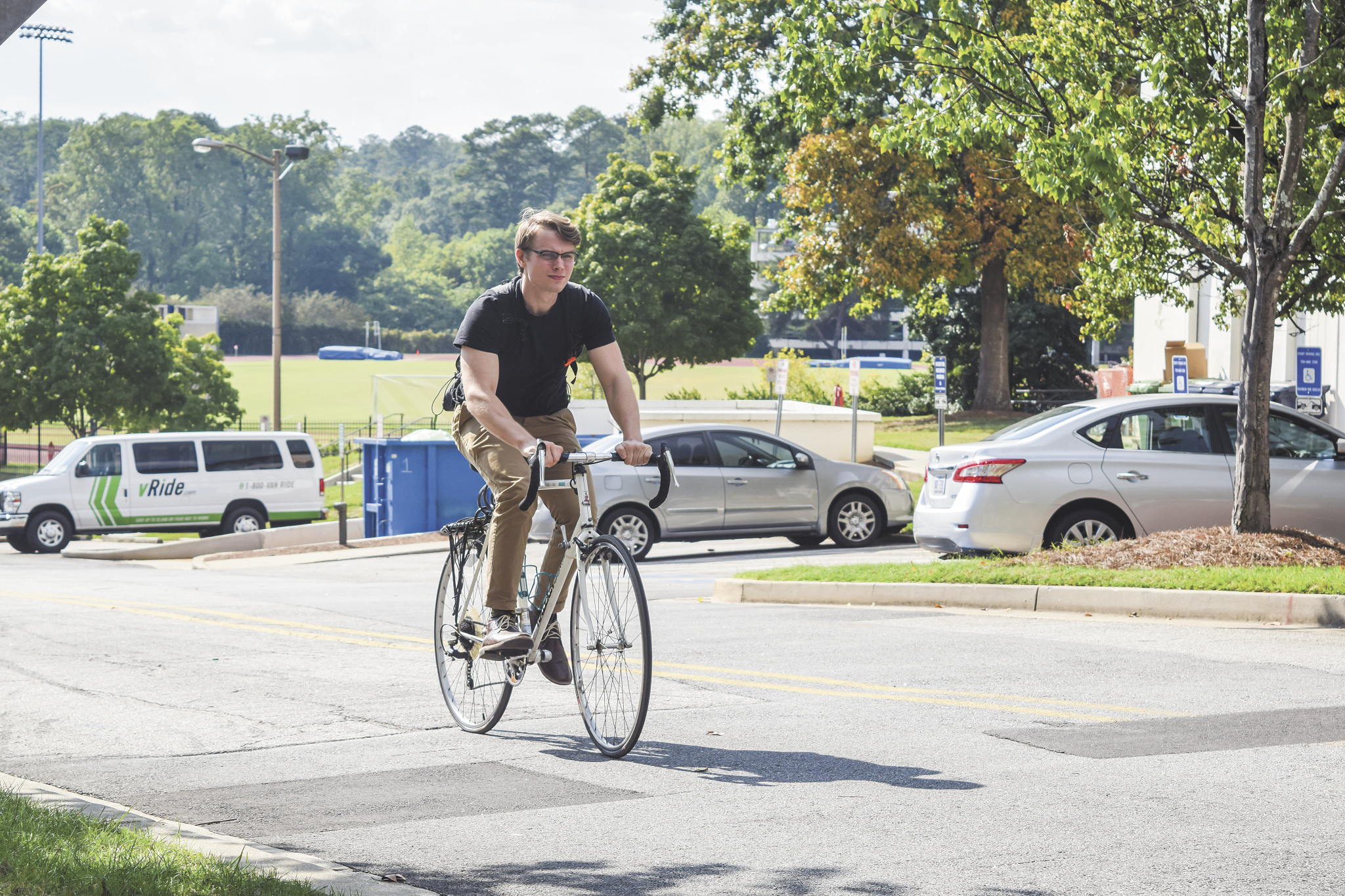 “Coming through!” a biker yells. He’s not wearing a helmet, and weaves quickly through a crowd of drowsy college students. On the other side of the narrow, downward-sloped lane, a longboarder whizzes by an Emory prospective students tour group. As everyone tries to reach their destinations promptly, some students have a looming fear of getting hurt.

“You have to watch out for [people on bikes and boards],” College freshman Noah Roos said. “They can definitely slow down your commutes since they are traveling faster.”

With limited parking on campus, some students living off-campus use self-powered mobiles to get to class. On-campus residents also utilize alternatives to walking for convenience and health benefits.

“[Biking] is a good way to exercise, and you can get to class faster,” College freshman and biker Ryu Michikawa said.

Emory Bike Social, an undergraduate bicycling club co-founded by College sophomore Benjamin Kasavan and College senior Andriana Miljanic, promotes bike culture on campus. With a program called “Social Rides,” Emory Bike Social hopes to expand the availability of loanable bikes. They are in the process of applying for a grant.

“Our mission is to provide a community and support for Emory cyclists and anyone interested in cycling,” Kasavan said.

But, with a wave of self-powered mobiles, such as longboards, electric scooters and hoverboards, some students think that the school has left many safety concerns unaddressed. In the past, pedestrians have called for better commuter facilities, such as adding showers, more bike racks and repair centers.

“The result was nothing more than a protected bike lane between Eagle Row and Woodruff Circle only on the west, which is a distance so short as to be useless,” Kasavan said.

Students that walk to class would be affected by the Clifton Road improvement project.

College freshman and biker Emma Rollins said that she wants to see biker-only lanes in more places across campus.

“More bike lanes would help direct me,” Rollins said. “As someone who doesn’t know whether to ride in the middle of the road or on the side of the road, it could be a good idea.”

Some students think that enforcing conduct and behavioral guidelines can act as a substitute for the lack of infrastructure.

“People should not bike when there [are] a lot of people,” Michikawa said. “On Tuesdays, when there is a farmers market, [biking is] really hard … it’s more like a courtesy for people to just walk their bike. They should also not go too fast even if it’s downhill.”

Other commuters think that practice with their transportation of choice is the key to safety when it comes to self-powered mobiles.

College freshman and longboard rider Ton Kiangsiri practiced fundamental techniques with some friends at night in a parking lot. Now, Kiangsiri skates down Asbury Circle at 9 a.m. most mornings to get from Raoul Hall to Goizueta Business School in three minutes.

“You need to know how to predict where people are going,” Kiangsiri said. “Suppose if I see someone coming straight, I would weave right so they know to go left.”

“I pay attention to people and definitely the road, because if you skid over a bump, you’re [done],” Kiangsiri said, “I tend to longboard in the middle and stay away from people going the same direction because they can’t see me coming.”

Like a turn signal, formal warnings can alert pedestrians to move aside, but some students find these safety precautions to be tedious. For example, Rollins said that she doesn’t take herself seriously enough to say, “On your left,” despite believing that it would be a good safety precaution. Similarly, she doesn’t wear a helmet while biking on campus. Wearing protective gear is at the rider’s discretion.

“I have [a helmet] and if I were to ride far off-campus or ride a mile, I probably would [wear it],” Rollins said. “But, riding around campus where so many people don’t [wear a helmet], I would feel kind of weird doing [so]. I feel like it’s a little overkill like going from class to class.”