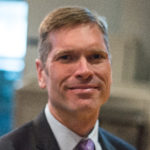 No student unaffiliated with the Wheel attended the open forum held by the third candidate for the College of Arts and Sciences dean position Thursday morning in Harland Cinema.

Open to all Emory students, the forum was a chance for Interim Dean of the College of Arts and Sciences Michael A. Elliott — one of four unranked College dean candidates — to be “introduced to the students as part of the [selection] process,” according to an April 4 College Council (CC) email. Only one student attended each of the previous open forums for two of the other candidates, respectively.

Elliott said he has increased faculty diversity during his term as interim College dean, recruiting three new professors in the natural sciences and extending a job offer to a fourth.

“One of the [College] initiatives this year was to search for four faculty in the natural sciences and mathematics who have expertise in mentoring and advising underrepresented minorities,” Elliott said.

Although Elliott acknowledged that an external hire could bring a new perspective to the University, he said that an internal hire has already established relationships and an understanding of the Emory community.

Elliott maintained that he would push himself to review Emory’s practices, such as the pre-major advising system and the pathway for Goizueta Business School students. He added that Emory could improve the transition for Oxford College students to the Atlanta campus, increase undergraduate research opportunities and improve Business School course accessibility for College students.

The interim College dean said he decided to apply for the permanent position because he enjoys speaking with prospective and current students, faculty members and alumni about current events at Emory.

After joining Emory’s faculty as a professor of English and American studies in 1998, Elliott served as senior associate dean for faculty from 2009 to 2014 and as executive associate dean from 2014 to 2015.

The fourth College dean candidate will host an open forum for students April 21 in Harland Cinema at 9:15 a.m. Outgoing CC President Molly Zhu (17C), the sole student on the Emory College Dean Search Advisory Committee, said she did not know who the fourth candidate is. Committee Co-chair and Dean of Oxford College Douglas A. Hicks declined to provide the fourth candidate’s name. Hicks did not respond to multiple inquiries regarding the search timeline.

CC notified students of the College dean candidate forums April 9, but the email had misdated April 13 as Tuesday instead of Thursday. The Wheel confirmed with Zhu that the forum would occur Thursday. CC did not send out another email correcting the error.

The Emory College Dean Search Advisory Committee will make a recommendation to Sterk, who names the next College dean.

UPDATE (4/18 at 6:40 p.m.): The Emory College Dean Search Advisory Committee aims to announce the next dean before May 5, according to the Emory News Center.