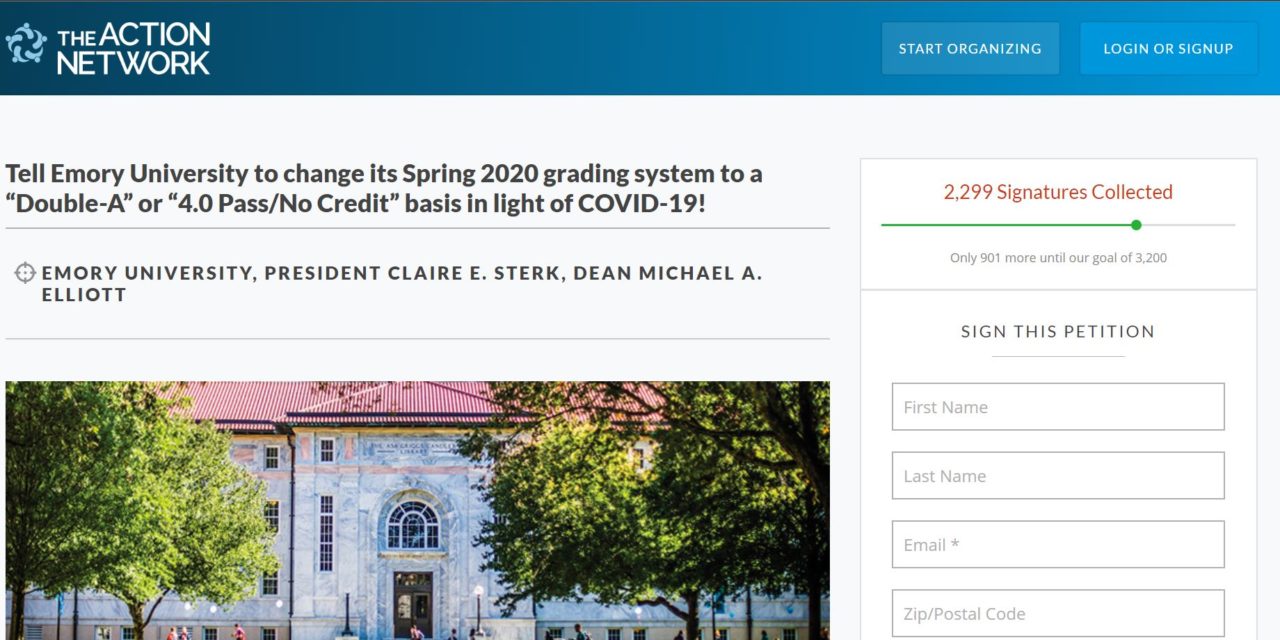 Several Emory student organizations have created a petition urging Emory to change its grading system to either a “Double-A” or a “4.0 Pass-No Credit” system, asserting that the current pass-fail option engenders academic inequities.

The petition, signed by Emory Young Democratic Socialists of America, the Recognizing, Empowering, and Affirming Latinas (REAL) Conference and FemmeBeat, has garnered over 2,299 signatures since its inception on March 29.

In response to the COVID-19 outbreak, Emory announced in a March 19 University-wide email that it would allow students to either choose pass-fail grading for current classes or maintain letter grades. The email also noted that courses taken pass-fail will count toward general education, major and minor requirements.

The current optional pass-fail grading system “punishes Emory’s most vulnerable students who find themselves in inadequate learning situations during the global COVID-19 crisis,” the petition reads. The “stigma” surrounding pass-fail may hurt a student aspiring for graduate programs like medical school, scholarships or job opportunities.

The “Double-A” grading system, in which students would receive either an “A” or an “A-” on their transcripts, would allow faculty to grant either letter grade at their discretion. The “4.0 Pass-No Credit,” on the other hand, would equate a “pass” with a 4.0 grade, and a failed class would be dropped from a student’s transcript entirely. Students of the petition argue that either path would mitigate the disproportionate harm created by the current grading system.

The two grading systems proposed by the petition would also benefit students who “have been working hard to raise their grade point averages this semester” or who prefer letter grades — a consideration the University cited in its reasoning against implementing a universal pass system.

Two weeks after the announcement of the pass-fail option, amid growing student frustration with the move as expressed in the petition, the University extended the deadline to opt for pass-fail grading until April 27, the final day of classes. After this date, students can petition to change the grading basis of their classes.

“We especially appreciate the desire expressed in an on-line petition, and elsewhere, to protect the most vulnerable members of our student community,” the email reads. “Please be assured that these issues are happening across higher education, and graduate and medical schools will all be aware of the extraordinary circumstances facing students in Spring 2020.”

Morissa Wisdom (22C), one of the petition’s creators, said that although the University’s communication regarding the optional pass-fail system seems immutable, she hopes administrators are still considering how to adequately address the situation that many, specifically first-generation and low-income students, are going through.

“They have to acknowledge that people are struggling, at the very least,” Wisdom said.

The petition states that many students are enduring inauspicious conditions for academic success. Namely, Wisdom attributed the evacuation of on-campus housing as a precursor for these students’ situations.

“18% of the student body receives Pell Grants, meaning that they are financially in need, … and as of right now about 30% of Emory’s student body has signed the petition so it’s looking pretty good in numbers right now,” Dasilva said.

The petition does not ask respondents to indicate their affiliation to Emory.

Dasilva believes that a “Double-A” grading system will level an unequal playing field between “those who are disadvantaged and are going back to homes that they simply cannot concentrate as well in” versus those who are “more privileged and [have] nothing to worry about.”

She noted that many students, including herself, now have to worry about paying bills on top of focusing in class, all while living within distracting environments. For Dasilva, this entails living with her aunt and three cousins in a one-bedroom apartment.

Dasilva hopes to keep up momentum and continue calling on Emory to listen. She’s currently encouraging students to create videos of their personal stories in an attempt to promote awareness and capture administrators’ attention.

Regardless of the final outcome, Wisdom remains hopeful that the petition will have an impact on the community, and at the very least, serve as a window into the lives and needs of Emory’s most vulnerable students.

“The existence of the petition represents the struggle that a lot of students are going through,” Wisdom said. “This is a problem that can’t be ignored.”

The Centro Latinx Advisory Board (CLAB), which is listed as a signatory to the petition, told the Wheel in an April 3 email that it did not endorse the petition as an organization.

“Recently it has come to the attention of the Centro Latinx Advisory Board (CLAB) that CLAB is a supporter of a petition regarding the ‘Double-A’ or ‘4.0 Pass/No Credit’ option for Emory,” the email reads. “This is, simply put, false.”

CLAB noted that individual board members were allowed to sign the petition.