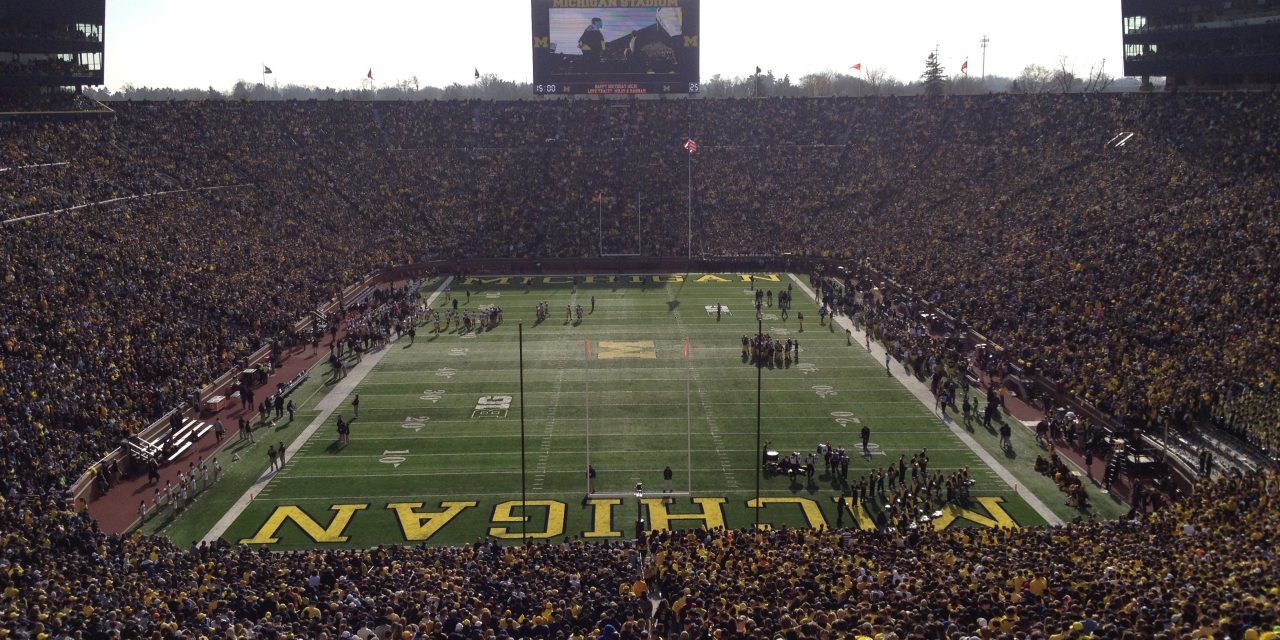 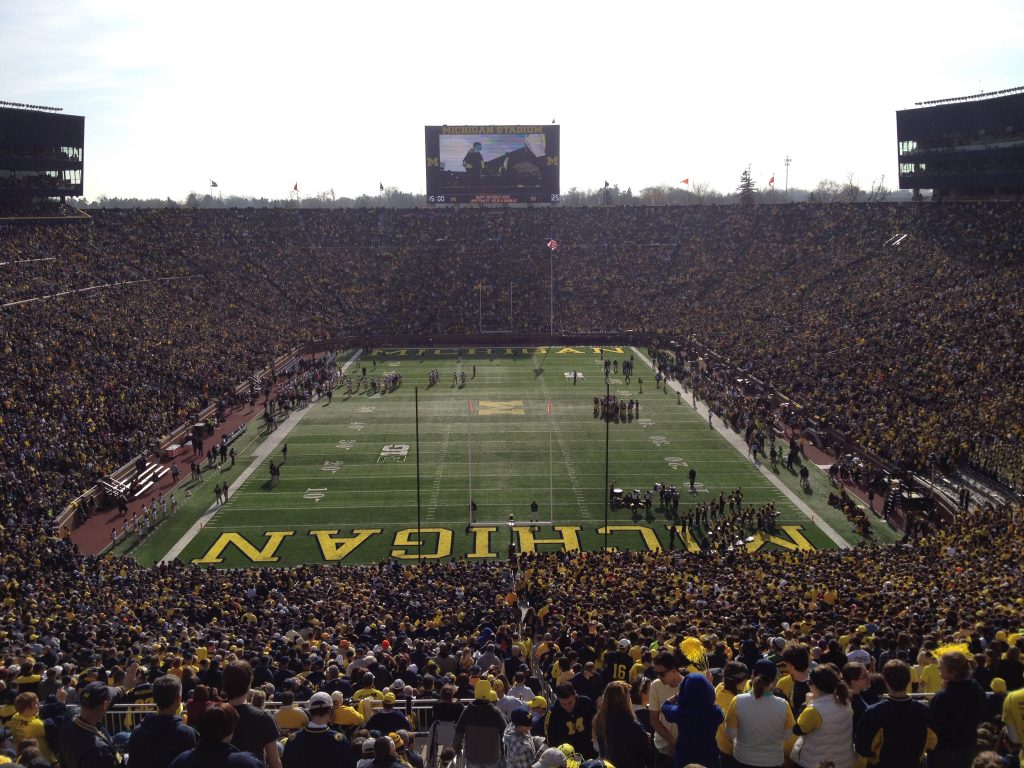 The University of Michigan and University of Iowa football teams face off at Michigan Stadium in Ann Arbor, Michigan on Nov. 17, 2012. (Courtesy of lonewolf371/Wikimedia Commons)

The 2022 Winter Olympics, a multiweek affair designed to showcase the pinnacle of athleticism, pulled in an average of 11.4 million primetime viewers across NBC’s networks.

When the Ohio State University and University of Michigan football teams faced off in their annual Big Ten Conference rivalry game on Nov. 27, 2021, 15.89 million viewers tuned in to FOX. Another 111,156 filled Michigan Stadium in Ann Arbor – the largest stadium in the United States and the third-largest worldwide – while thousands of fans tailgated outside the venue and nearly 200 miles away in Columbus, Ohio.

The Big Ten is perhaps the most prestigious athletic conference in the NCAA. Its member schools routinely snag the top-ranked high school prospects and cater to alumni bases that easily tally television ratings higher than those of global sporting. The conference’s success recently earned them a $7 billion media rights agreement predicted to shower each member with up to $10 million per year.

Unsurprisingly, college administrators routinely sign on the dotted lines without consulting the student-athletes whose labor makes it all possible under the paper-thin guise of acting in their best interests.

Being a Big Ten school includes more than just financial perks: matchups against the most competitive teams in college sports, broadcasts on major television networks and access to an avidly loyal fanbase. It’s an opportunity schools would be foolish to pass on, and one none have been afforded since Rutgers University (N.J.) and the University of Maryland joined the conference in 2014.

That’s why the University of California Los Angeles (UCLA) and the University of Southern California’s (USC) joint decision to leave the Pac-12 Conference – a lopsided group of teams largely dominated by a select few along the pacific coast, including UCLA and USC – and enter the realm of the Big Ten in 2024 rocked the sports world.

In the ensuing months, seemingly every sports outlet had publicized their opinions, theories and analyses on the future landscape of college sports, demonstrating a passion and thoroughness media normally reserve for presidential elections. It’s easy to let the drama and dollar signs distract us from the casualties of such opportunistic conference-hopping: the student-athletes, who are often afterthoughts in the very business their unpaid labor keeps afloat.

As the Big Ten arrangement currently stands, the 2024 addition of UCLA and USC will bring the total member count to 14. Big Ten Commissioner Kevin Warren’s promise to embrace an “aggressive” expansion policy moving forward opens the door for that number to climb even higher. Part of what fuels the intensity of college sports are the highly-anticipated rivalry games, often intra-conference matchups, that pit teams against one another year after year. The feasibility of scheduling them every year will evaporate if the Big Ten becomes so large that its members can’t cram all those games into a single season. Eliminating the rivalry games, or at the very least diminishing their importance, robs athletes of the chance to battle for bragging rights and earn a place in their school’s athletic history.

Although UCLA and USC are fantastic fits for the Big Ten on paper, their geographical distance from the nebulus of the other member schools makes them an inconvenient outlier. Currently, the most western non-California school is the University of Nebraska which, located in Lincoln, is still at least a three-hour flight from Los Angeles. The east coast destinations like Maryland, Rutgers and Pennsylvania State University are even greater travel nightmares.

What’s more, the weather changes dramatically outside the confines of the west coast. Imagine the shock the west coast athletes accustomed to average lows of 48 degrees in January, the average high for a November in Ann Arbor, Michigan, will experience upon leaving their sunny California oases to play games in freezing winds and steady snowfall.

Given that football and basketball – mostly men’s but also women’s, though to a much lesser extent – drive conference membership decisions, all other sports get sidelined when athletic executives chase after money. The downsides of the new Big Ten formation will hit women’s sports and less financially successful men’s sports the hardest. At least football and basketball players get to perform for sold-out crowds and see their faces on ESPN every week to soften the blow. Athletes in other sports won’t reap the benefits of the increased exposure to such a satisfying degree.

As college athletic conferences like the Big Ten dig their foothold even deeper in the sports landscape, it becomes harder to stomach the reality that the student-athletes running the show may never directly receive a dime of that media contract money. It was only last summer that the Supreme Court declared that the NCAA’s borderline criminal bans on student-athletes profiting off their name, image and likeness (NIL) were unconstitutional. Although plenty of high-profile athletes, including University of Alabama quarterback Bryce Young and University of Connecticut guard Paige Bueckers, have obtained lucrative, long overdue sponsorships, the vast majority won’t. The new NIL rules are an important step in returning agency to student-athletes, but in practice they provide meaningful financial benefit to a scant few.

Still, proponents of a Big Ten superconference argue that increased media exposure will bestow indirect benefits on Big Ten athletes. To hear Ohio State University athletic director Gene Smith tell it, student-athletes already get paid; that is, if the “help they receive from trainers, strength coaches, sports psychologists, nutritionists and academic counselors” is considered valid payment. After all, if the Big Ten hopes to entice elite head coaches who can compete with the SEC’s Nick Saban (Alabama) and Kirby Smart (University of Georgia) – whose annual salaries total $11.7 million and $11.25 million, respectively – the athletic departments must soak up every last drop.

Unfortunately for the Big Ten, none of those perks can pay an athlete’s bills. Playing mini golf in the athletic facilities after practice may be fun, but it doesn’t pay for housing fees, food or the portion of tuition not covered by a scholarship. In a system powered by the success of basketball and football players, most of whom identify as members of historically marginalized populations, ensuring that student-athletes receive their dues should be a priority for institutions like the Big Ten who have the capital to do so. Instead, a disappointingly small number of schools have stepped up and committed to paying student-athletes a modest bonus. At most colleges, athletes are resigned to putting grueling hours into a job for which they never receive compensation.

The drama that has ensued in the wake of the Big Ten shakeup has highlighted the central conflict at the heart of college athletics: while the stakes continue to get higher for university administrators, they never budge for student-athletes.

At the end of the day, only a select few advance to the professional leagues; the rest obtain their degrees and step away from competition as they enter a new career. Conference administrators should be doing everything in their power to make athletes’ precious four years of eligibility as worthwhile as possible, both on and off the field. Their failure to even pretend they are acting as such is a dismal acknowledgement that to them, student-athletes are merely expendable cogs in an exploitative economic machine they helped to build.