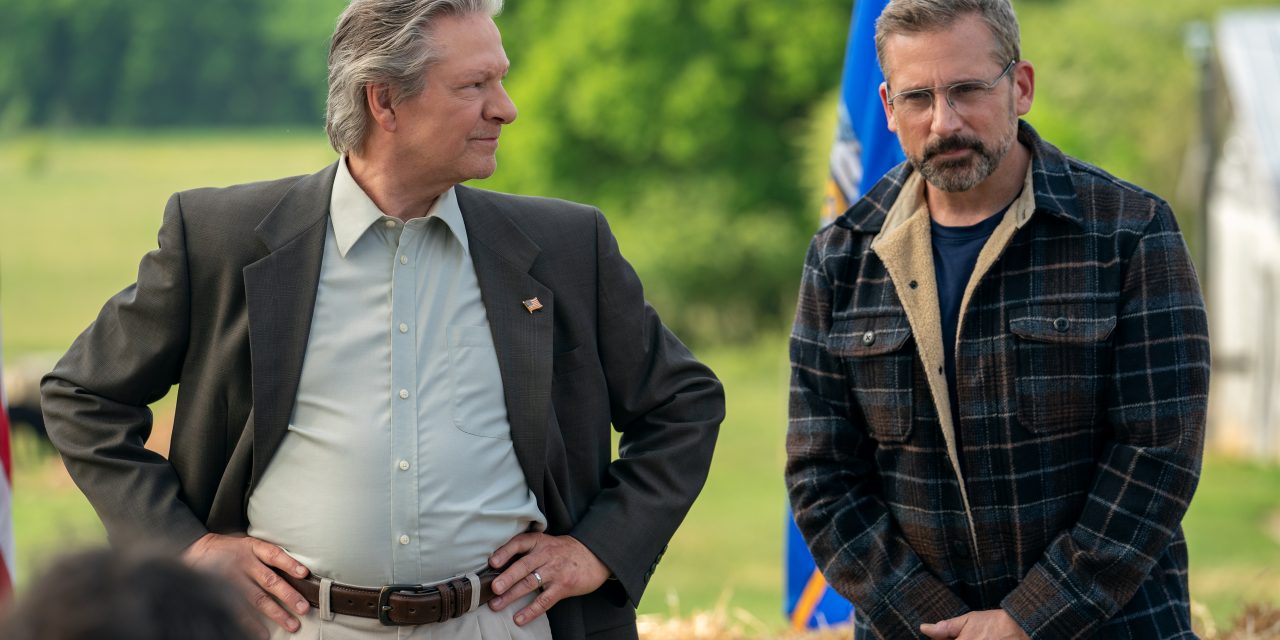 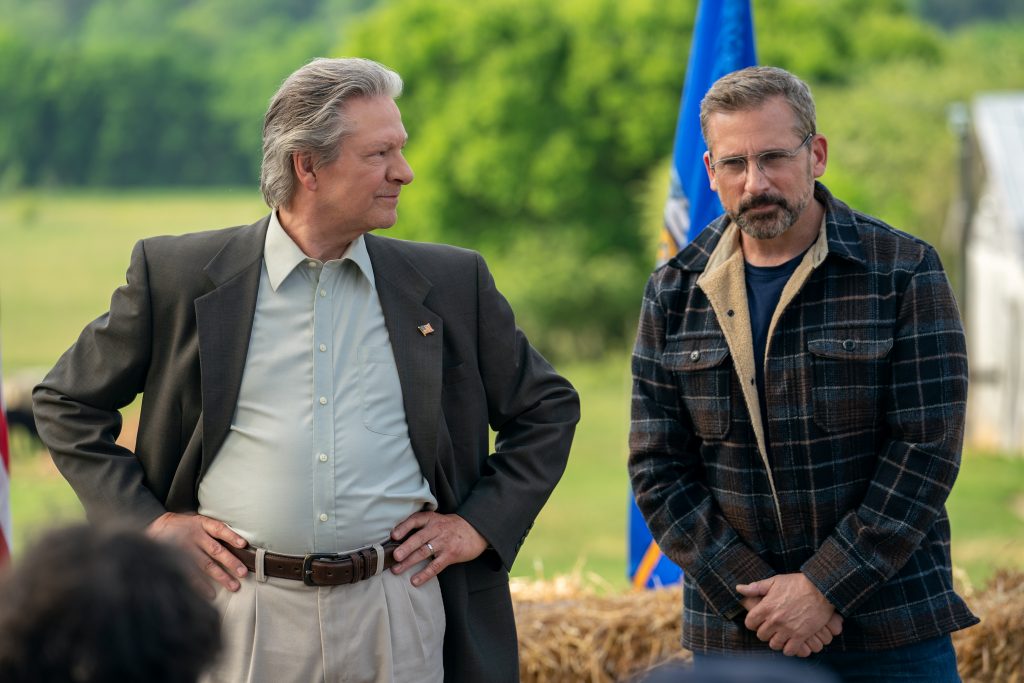 Gary Zimmer (Steve Carell) and Jack Hastings (Chris Cooper) announce their campaign in front of the citizens of Deerlaken./Courtesy of Daniel McFadden/Focus Features

Since stepping down as host of “The Daily Show” in 2015, Jon Stewart has kept a low profile, which is especially surprising in today’s political climate. So when I saw the news that he had written and directed a new film, I had high expectations. Starring former “The Daily Show” correspondent Steve Carell along with Chris Cooper and Rose Byrne, the pieces are in place for “Irresistible” to be a compelling political comedy. As it stands, the film falls short of its potential, neither leaning into its comedy nor politics enough to stand out as a film worth renting on video on demand.

“Irresistible” tells the fictional story of Gary Zimmer (Carell), a democratic political consultant reeling from the Trump election and desperate to rally support for his party. In an attempt to attract a new Midwestern demographic, Gary recruits ex-marine colonel Jack Hastings (Cooper) to run for mayor in his small town of Deerlaken, Wisconsin, as a candidate who represents “a redder kind of blue.” Jack’s grassroots campaign is thrown for a loop when it grabs the attention of Gary’s nemesis Faith Brewster (Byrne) of the Republican National Committee. Faith enlists incumbent Mayor Braun (Brent Sexton) to combat Jack and Gary’s campaign head-on.

For a film that begins with a sizzle reel of past presidents and presidential candidates, the film is surprisingly less political than you may expect. The overarching theme of the film is Washington’s disconnect with small-town America, but it’s far more of a simple fish-out-of-water story than an attack on Washington’s elite. What could have been a sharp political commentary often settles for low-brow humor exhibiting Gary’s detachment from his new surroundings, like Gary grimacing as Diana Hastings (Mackenzie Davis) shoves her arm up a cow’s butt. Not to mention the fact that fish-out-of-water plotlines are so worn out and overused in Hollywood (see recently: “Shazam,” “Wonder Woman”) and Stewart’s script isn’t strong or funny enough to compensate for the cliches.

Carell, who has become an icon from his comedic roles as Michael Scott in “The Office” and Brick Tamland in “Anchorman: The Legend of Ron Burgundy,” will likely draw viewers on name alone. However, his character isn’t nearly as funny as those prior performances and isn’t written to be layered or likable either. Carell isn’t bad — as an actor, he has a natural charm and charisma — but there’s nothing unexpected in his performance to make it noteworthy. Gary’s scenes with Faith give Carell the best opportunity to dig into his role, but even their scenes feel constraining.

On the other hand, Cooper is fantastic as a soft-spoken, earnest veteran who is suddenly swept up in the world of politics. While Carell seems to be playing another version of himself, the versatile Cooper transforms into his role. Jack is a sympathetic character who is even more out of his element than Gary, as he is painfully shy but is thrust into the limelight by Gary’s political machine. Cooper sells every second of it, expertly balancing Jack’s insecurity with charm so that we’re rooting for him to be happy, regardless of whether he wins the mayoral race.

Your overall opinion on “Irresistible” may hinge on the film’s climactic twist, which seemingly comes out of nowhere and spins the film on its head. I found it to be a pleasant surprise to a rather pedestrian drama, but I suspect that others may find it a bit ridiculous and unearned. If nothing else, it’s a memorable conclusion to a forgettable film.

Overall, while not a bad film on any account, “Irresistible” fails to live up to its massive potential. While Cooper gives a strong performance and the end twist is clever, the script is scattershot and the film fails to get across a clear message. Perhaps Stewart should pivot from filmmaking and return to talk shows; after all, in these tumultuous times, we could certainly use Stewart’s late night satire to cheer ourselves up.