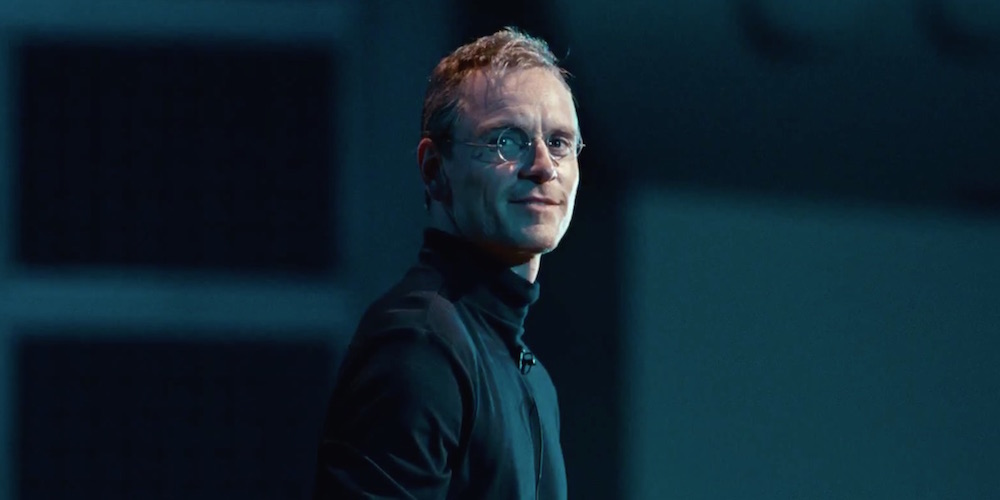 The good news for the new Steve Jobs film is that the biggest hurdle it has to clear is 2013’s Jobs, which starred Ashton Kutcher, as Steve Jobs. So at the very least, it’s better than that hagiographic train wreck.

But considering the talent on display here (this film is written by Aaron Sorkin, directed by Danny Boyle and stars Michael Fassbender in the titular role), we should have expected that. And those credentials alone should answer any question regarding why we need another Steve Jobs biopic.

But those credentials also raise another question. Namely, whose movie does this end up being? What is the creative force that drives Steve Jobs, and therefore, how do we understand what this movie is about?

This biopic of Apple Founder and CEO and tech giant Steve Jobs takes the single smartest approach any biopic can take by placing laser-like focus on a very specific part of Jobs’ life. It focuses on the backstage preparations of three major product launches. We see the Macintosh in 1984, the Apple NeXT in 1988 and the iMac in 1998. Each is a single real-time scene with tense and confrontational conversation bringing a focus on five individual interpersonal relationships, those between Jobs and Steve Wozniak (Seth Rogen), John Sculley (Jeff Daniels), Joanna Hoffman (Kate Winslet), Andy Hertzfeld (Michael Stuhlberg) and Jobs’ daughter, Lisa Brennan-Jobs (Makenzie Moss at 5, Ripley Sobo at 9, and Perla Haney-Jardine at 19).

If you’re getting the sense that this is an excessively structured movie, you’re correct. Perhaps more so than any other movie this year, this is one that lives and dies by its structure. The entire film is constructed from near constant dialogue and characters’ reactions to what’s being said. In other words, it’s a screenwriter’s kind of film, one where the basic blueprints of the whole thing hold it together, and dialogue is law.

It’s the kind of film that would be almost impossible for anyone besides Aaron Sorkin to create. Sorkin is perhaps one of the few celebrity screenwriters in Hollywood. For those of you unfamiliar with filmmaking job structure, being a screenwriter is shockingly low on the totem pole. You draw the blueprints, but they’re altered constantly, and it’s beyond rare for any screenwriter to be a creative voice in the finalized project, unless they’re also the director.

When Sorkin writes a film, his fingerprints coat it. And that’s certainly no exception in Steve Jobs.

The film is constant and has rapid-speech-making, needling-back-and-forth, supernatural wittiness on the part of its characters — a natural outgrowth from Sorkin’s reputation as one of the best dialogue writers in Hollywood. Undoubtedly, Sorkin’s script is the beating lifeblood of this film. The conversations (at their best) are as intense and cutting as any action sequence, with a particular favorite being the intense cross-cutting fight between Jobs and Apple CEO at the time, John Sculley, that contains some of the most insane, dual-dialogue, line reading pyrotechnics I’ve seen this year.

In case you haven’t figured it out yet, I come down largely on the side of the film belonging to Sorkin’s script, and believe that we can undeniably call it a Sorkin film. This also, however, means that the weaknesses of Sorkin’s script becomes much more prevalent without a strong creative voice to challenge him.

Sorkin’s script, for starters, is truly exhausting at points. And this perhaps is due to the backseat that Danny Boyle takes in directing this film. Boyle is undeniably a stylish director, an incredibly kinetic one, but here, he feels confined to the set space. While he gets a moment or two to flourish, so much of what he does feels like it’s kowtowing to the needs of a Sorkin script: long and constant takes that are designed to allow his actors to get through pages and pages of dialogue.

With Sorkin’s previous tech giant script, The Social Network, he had David Fincher, one of the most legendary control freaks in cinema, directing. With Fincher, Sorkin had someone who had just as many ideas about the material as he did, one who was willing to blend his own style in with the needs of a Sorkin script. Sorkin’s rapid dialogue and constant movement was slowed by Fincher’s deliberate and procedural filmmaking, and Fincher’s precision and spacing felt rapid and fresh thanks to Sorkin’s script. It is clash and collaboration that created brilliance.

On Steve Jobs, however, Boyle does not feel like an equal partner; rather he feels like a journeyman for most of the film. And even when Boyle comes through, it’s through his constant and kinetic movement, which is far too complimentary to Sorkin. We lose the clash that Fincher had. But so much of the film is without some directorial flourish, some idea to balance throughout the whole thing. There is no Fincher-level control freak, so Sorkin’s constant dizzying tornado of dialogue is going to wear even the most seasoned viewer of his work out. Especially in the connective tissue between the major conversations, which often slows the excitement down.

There’s also a great degree of artificiality to the film. This isn’t to say every film should be gritty, down to earth and realistic. Escapist, heightened films are where the medium is at its best.

Now, none of this is due to the acting. It’s a small cast, but they do a phenomenal job. Jeff Daniels feels the most at home performing the verbal gymnastics of Sorkin, having spent three seasons as lead on The Newsroom. He’s undoubtedly one of the highlights in the supporting department. Rogen does the fairly standard “comedian turns dramatic” killer turn, playing generally popular muppet-like co-founder Wozniak, who begs Jobs to give him some recognition for what him and the Apple II team did. And Winslet, as Jobs’ closest confidant and marketing director (and inconsistently accented Polish woman) Hoffman, does much of the heavy lifting of the supporting cast, providing the other constant link throughout the film for the audience to hook into.

Now it’s time to discuss the big one. Michael Fassbender as Jobs. An actor who appears in every scene, at every minute, and has more lines in one movie than some actors have had in the whole of their careers. If there’s anyone else we could argue has a creative say in this movie, it’s Fassbender, due to the choices he makes in crafting and portraying his performance of Jobs. Fassbender’s Jobs is a fundamentally broken man, someone who was “poorly made” (as Jobs heartbreakingly confesses to his daughter towards the end of the film). He’s constantly competing against his worst instincts, and giving into them far too often. But there’s also a constant attempt to get something right, to not make his work the best part of him. Fassbender turns in a remarkable performance, one in which, no matter how you feel about Jobs, you know you can understand where he’s coming from and who he is. Fassbender’s Jobs is a masterclass performance by one of the best actors working today, and that alone makes the film worth seeing.

Back to Sorkin’s credit — so much of that character work exists in the script. While the situations and the contrivances of the plot may be artificial, the characters that populate it are certainly not. They feel like real and difficult people.

The creative impetus of Steve Jobs rests with Aaron Sorkin, with all his flaws and all his wonderful creative brilliance. But without a second voice to compromise and negotiate for what goes on, the film loses some of the magic of The Social Network, and the excesses of the script start to show the stitch work and the strings of the puppets. A deservedly future Oscar-winning performance from Fassbender and the strong work of the supporting cast along with plenty of great dialogue battles and exchanges make Steve Jobs a delight to watch.

But it’s just not the definitive statement on the tech age that it could be.