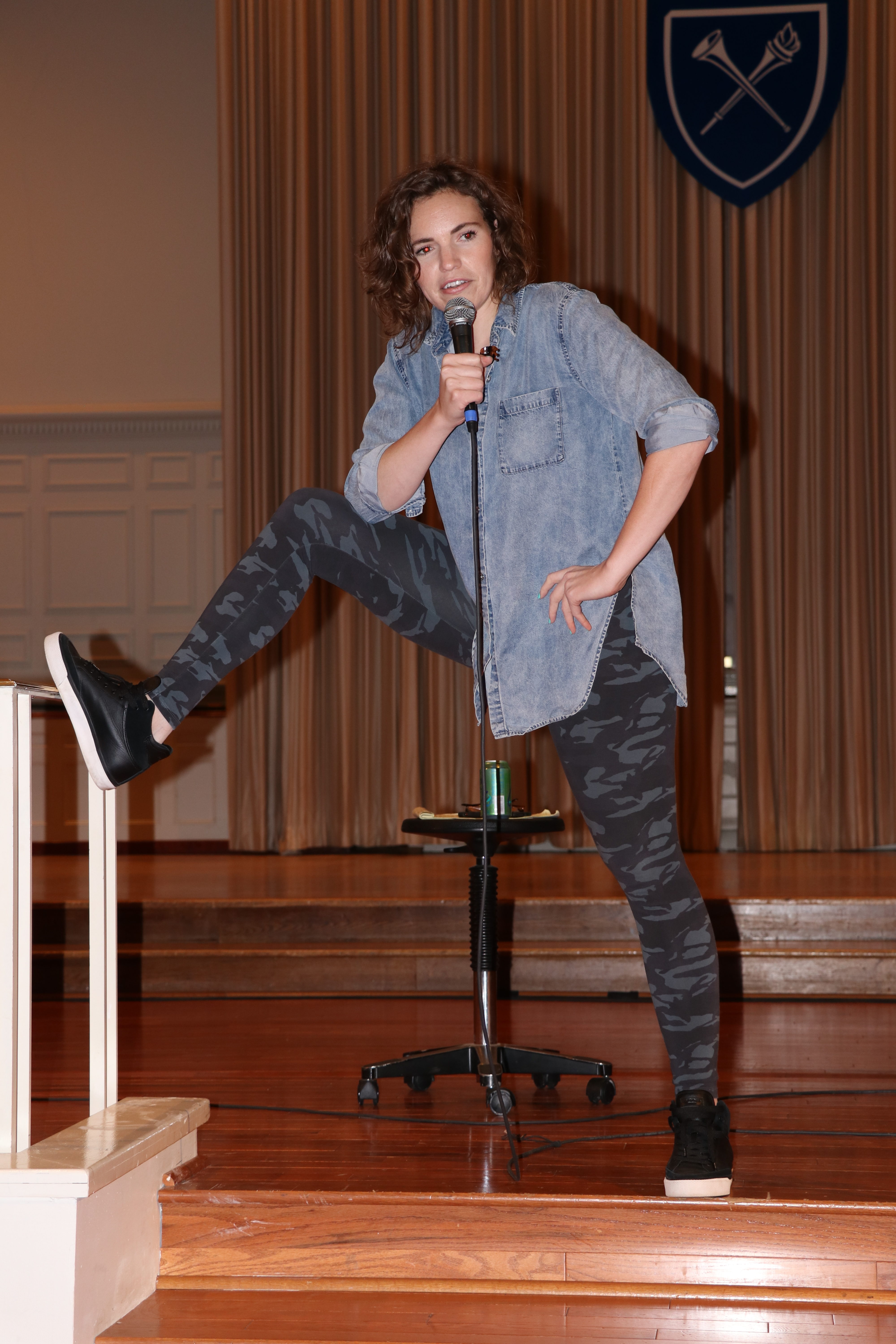 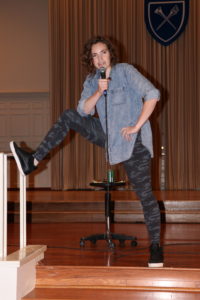 Oct. 18 was not Beth Stelling’s first time performing in a church, she told her audience of over 75 students sitting in the pews of the Glenn Memorial Church.

If you’ve seen Stelling’s Netflix special in “The Standups” or have experience with stand-up in general, you might imagine that her material did not exactly fit the church setting. As the Homecoming comedian this year, Stelling surprised the audience with her adaptability and quick wit.

When Stelling came on stage, she immediately addressed the sparse crowd and asked if Emory “fills this place on Sundays,” because, if so, she was disappointed with the Thursday turnout. Her introduction earned some laughs. She tried to make the best of the small audience by addressing specific students, especially the photographers in the front row. The “I Love You, America, with Sarah Silverman” writer asked them if they were taking photos for a calendar of hot female comedians, and proceeded to pose for the camera. She even did splits on stage, which received enthusiastic applause —“this is how I like to start [my set],” she announced. She continued to joke about church and religion, even briefly breaking into a church song from her youth (her voice was surprisingly good).

If you’ve seen Stelling’s episode on Netflix, you would have recognized a few of her jokes with slight variations, but not all of them went over well. Her classic off-handed remarks such as “I am currently heterosexual” and “My mom is a virgin” seemed to play better on “The Standups.”

However, her discussion about working in a bagel shop was better received. This was part of a bit on what it’s like to be a woman, when she mentioned how the only catcall she has able to get at this point in her life was a guy hanging out of his driver’s window and yelling “B-minus!” She discussed her weight gain during her bagel shop job and how she wished that women’s worth wasn’t based on appearance, which received a number of excited yells and snaps from the audience. She countered this by saying, “but it is.” Compliments about women’s weight loss, she continued, were basically just complimenting women on taking up less space. Still, Stelling said women were delighted with compliments about their appearance because it just “fills us up … ‘cause we’re hungry.”

After commenting on women’s bodies, Stelling delved into riskier subjects. When talking about her time in gymnastics as a young girl, she made a joke that she said it has  “literally never” gone over well, because it sounds a lot like a “pedophillia joke”: despite her past lack of success, she joked that female gymnastics might be late bloomers so their male coaches weren’t tempted. The Emory audience didn’t prove an exception to the trend, but Stelling was able to recover somewhat by bringing it back later, specifically when she said of her dating life, “I snagged a teen,” and, after seeing the confused looks in the audience, continued, “I was also a teen [at the time].”

Stelling continued to get explicit about her personal relationships, talking about Tinder and how she has done her “10,000 hours” in bed. It felt like this discussion went on for quite a while, and that perhaps she was being more explicit because she was in front of an audience of college students. This, combined with a diatribe about how everyone is dependent on technology nowadays, gave the impression that she was on the opposite end from matronly matronly opener Kristin Rand when it came to catering to the audience — which is a good idea in theory, but it didn’t seem as authentic as it could have.

Rand began her short set at 8 p.m. sharp, as students were still arriving. Light laughter reverberated in the church as Rand addressed the audience, asking any students with tattoos to raise their hands and telling them how none of her own tattoos meant anything. The crowd was slow to warm up to her, and it seemed that many of the subjects she covered were not very relatable for the Emory audience — marriage, childbirth and motherhood, for example. She seemed to sense this, and there were some chuckles when she sarcastically asked if anyone in the audience was thinking about becoming parents. This concluded her portion of the night, and she passed the mic to Stelling.

Overall, despite the small audience filling only a fraction of the massive church, Stelling’s ability to read the room and connect with individual members shone through. Many students were busting guts at her wit. She ended her somewhat edgy set with a look around at the crowd.