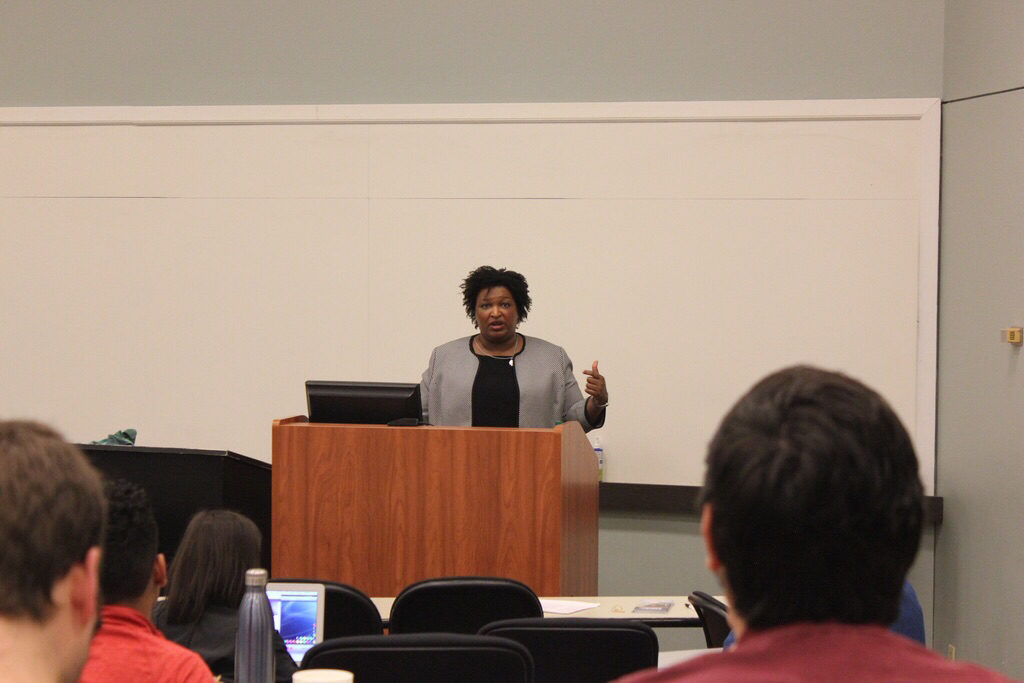 Georgia State Rep. Stacey Abrams (D-Atlanta), who is running for Georgia governor, expressed disapproval of Emory’s annexation into Atlanta and discussed her goals for improving Georgia education, health care and infrastructure at an Emory Law School Democrats meeting on April 4.

If elected, Abrams would serve as the first female African-American governor of Georgia.

Although Abrams supports the expansion of MARTA into Emory, she said that she did not support Emory’s annexation into Atlanta. Abrams said she respects the decision of the residents and businesses in the area, but she was concerned with the effect of such a large annexation on zoning for school districts.

“My caution is that, although we’re achieving economic benefit, we have to ensure the rights of children to have access to quality education,” Abrams said.

While serving as Georgia general assembly leader, Abrams said she made it a priority to help “good” legislation pass and block “terrible” legislation, pointing to her support of a 2015 bill that increased funding for transportation and her opposition to a 2009 bill that sought to create an English-only requirement for driver’s license examinations.

“The responsibility that we have is to not only promote good ideas but to block bad ideas and to mitigate harm,” Abrams said.

In 2011, Abrams co-authored legislation with Georgia Gov. Nathan Deal that made cuts to the HOPE (Helping Outstanding Pupils Educationally) financial aid program, which provides scholarships and grants to Georgia high school students, after the program was facing bankruptcy.

One of Abrams’ opponent in the gubernatorial race, Georgia State Rep. Stacey Evans (D-Smyrna), previously criticized Abrams for not doing enough to preserve the program, but Abrams told the Wheel that Evans mischaracterized the process and the roles she and Evans had in the process. Abrams also pointed out that Zell Miller, the creator of the HOPE scholarship, acknowledged that the 2011 legislation saved the HOPE scholarship and his legacy.

Evans objected to the HOPE cuts, which added an SAT requirement and raised the minimum GPA needed to qualify for the scholarship, a decision that Abrams said she respected. After the bill passed, Abrams said that Evans congratulated her for the work and acknowledged that they had achieved the best possible outcome. Abrams said she later worked with Evans to push legislation to restore funding for technical colleges. Their bill, passed in 2014, created the Zell Miller Grant, which pays for a portion of tuition for students attending technical college who have a 3.5 GPA, according to the Atlanta Journal Constitution.

“Representative Evans’ narrative is unsustainable based on the facts and her own actions,” Abrams told the Wheel. “I have been a co-sponsor of every successful expansion of HOPE legislation. Our first job was to preserve [the program], [and our] second [job was] to expand it and restore as much as we could.”

In addition to her work with the HOPE scholarship program, Abrams said that she wants to expand need-based aid regardless of a student’s GPA and increase funding for public schools, particularly in rural communities.

Abrams said that her first priority as governor would be to expand Medicaid, saying that health care is critical for both economic development and the well-being of Georgia residents. Abrams said that she also hopes to provide more aid to rural hospitals and develop a comprehensive system to treat mental health and substance abuse.

In addition to expanding Medicaid, Abrams plans to increase the minimum wage, calling the Georgia state minimum wage of $5.15 “a joke.” Abrams cautioned, however, that the minimum wage should only be increased to a level that the economy can sustain. She proposed looking to other programs that could help people make up the difference of increasing the minimum wage, suggesting the implementation of an earned income tax credit for full-time employees and a childcare tax credit.

“If you can’t increase the minimum wage, reduce the cost of living,” Abrams said.

“As a state, we are finally recognizing that transit is just as critical as roads and bridges,” Abrams said. “We have to understand that transit isn’t just a metro-Atlanta issue, this is a statewide issue. We are a state that is very large, that can be very isolated and the needs of the people in those [rural] communities can only be met by public transit.”

In wake of the Parkland, Fla., mass high school shooting and national protests that ensued, Abrams told the Wheel that she is a strong advocate for gun safety and has never received an approval rating from the NRA. If elected, Abrams said she will push for banning assault weapons, implementing universal background checks and creating a waiting period for purchasing firearms. She also wants to create legislation that protects the victims of domestic abuse by removing weapons from the hands of abusers and to expand support systems for victims of domestic abuse and those with mental health problems.

“[These groups are] too often overlooked,” Abrams told the Wheel. “It’s also important to remember that being mentally ill does not mean you’re violent, and being violent doesn’t mean you’re mentally ill. We have to treat these as separate conditions.”

CORRECTION (4/9/18 at 2:02 p.m.): An earlier version of this article stated that Evans was one of two members of the Democratic caucus who objected to the 2011 HOPE cuts. In fact, 31 House Democrats voted against the final version of the bill.