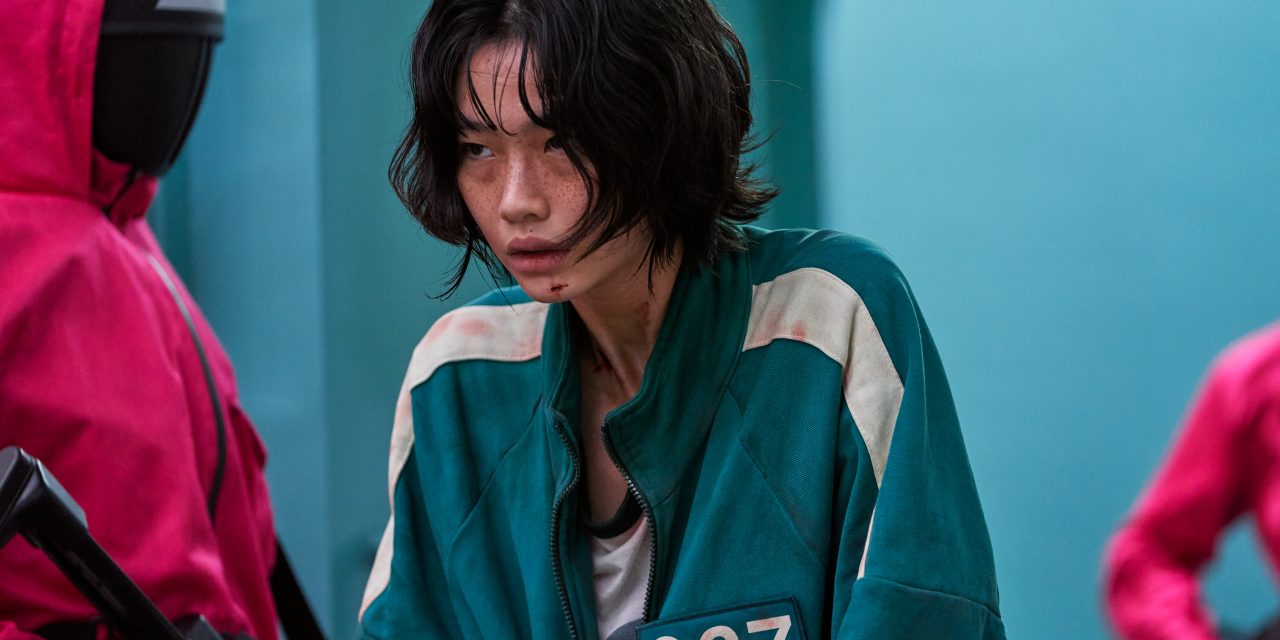 I can still remember the stress I felt as the line for the four-square court shortened ahead of me. Heart racing and palms sweating, I watched the ruthless fourth-graders dominate the squares, aggressively striking the rubber ball, determined to eliminate each player and claim the king quadrant. They defended the ever-changing rules of the game as though their lives depended on it (Carrying isn’t allowed! Lines are deadly!). Nothing stung more than being eliminated after the first round — except maybe the rubber kickball’s resonant sting against your palms.

“Squid Game,” Netflix’s newest dark thriller, portrays scenes evocative of the nerve-racking bouts of the elementary school playground, but with a sinister twist. Following six deceptively innocuous games, the show uniquely delivers an incongruous tone that makes for a gut-wrenching nine episodes. The premise of the games is simple: win six children’s games and walk home with an exuberant cash prize. It’s child’s play. People drowning in debt are plucked from their miserable lives by a peculiar organization and offered the chance to turn their lives around by participating in traditional games like red light, green light and tug of war. The indebted, desperate for the promised reward, are more than happy to oblige. It isn’t long before they realize that the price of losing far exceeds their dues, and elimination from the games is far worse than humiliation. The lines in this four-square match are quite literally deadly.

The show opens with the air of a cheesy drama — a cash-strapped guy who still lives with his mom has to reconcile with the fact that his gambling addiction prevents him from being the perfect father. But the show quickly takes a turn when our main character Seong Gi-Hun (Lee Jung-jae) is offered a spot in the Squid Games by a mysterious businessman in the subway station (Gong Yoo). Physically beaten by the loan sharks he owes and ashamed that his daughter’s stepfather is more financially competent than he is, he decides he has no other choice but to take the offer. After accepting his position in the games, he is anesthetized and taken to a remote island to play against 455 other competitors.

The show’s immense success is largely due to its ability to pull wool over the viewers’ eyes throughout all nine episodes. The players march to and from each game through haphazardly arranged staircases painted in bubblegum pink and chartreuse — a bizarre set reminiscent of those in old kids’ TV shows. The players are awoken each morning by the gentle waltz “By The Beautiful Blue Danube.” The prize money is collected in a comically large transparent piggy bank suspended from the ceiling. When the games’ horrors are revealed to both the viewers and the players, these aesthetic choices only compound the viewers’ fears. The eerie music-box-like soundtrack and heavily armed guards clad in hot pink jumpsuits lend to the feeling of false security, making each gruesome death all the more jarring and grisly imagery more unsettling. 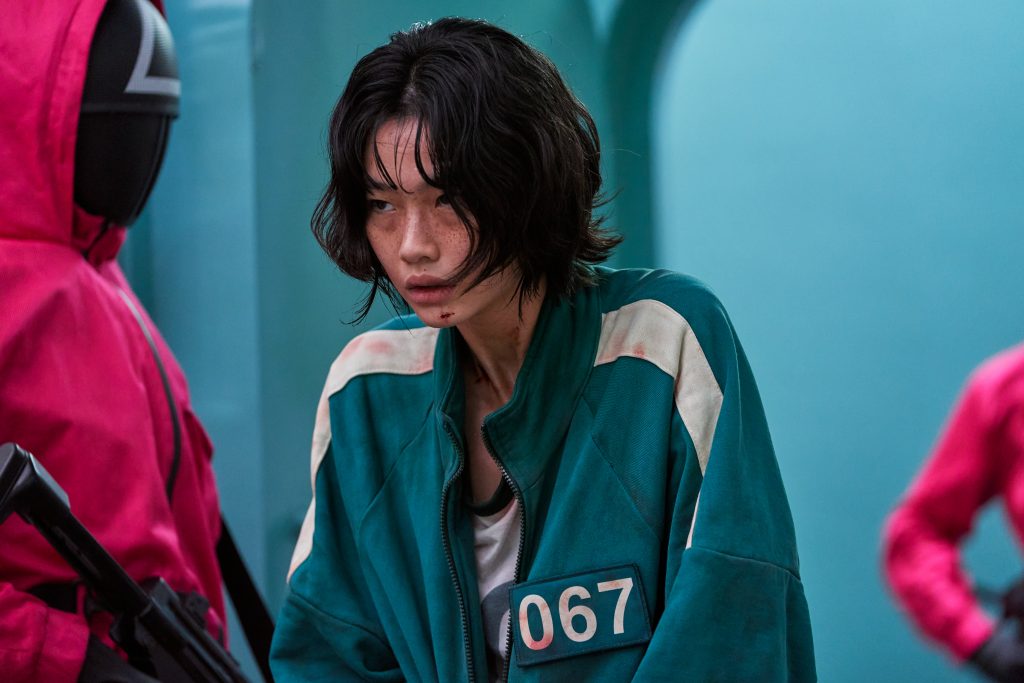 More deceitful than the set design is the group of players. I love well-written, morally gray characters, and “Squid Game” delivers a whole cast of them. The show departs from the cliché hero-versus-villain trope and instead slowly reveals the villain within each character. Though generally likable, Gi-Hun often allows his emotions to hinder his decision-making. While his childhood friend Cho Sang-Woo (Park Hae Soo) takes on the role as the clever and calculated leader, his hunger for money growls louder than his loyalty. And though frail, wise Oh Il-nam (Oh Young-soo) ​​may seem like one of the most trustworthy of the bunch, his motives are not as innocent as they seem. As the games get bloodier and the cash prize more alluring, the players must decide if preserving their integrity is more important than their lives. While some characters are more cold-blooded than others, every character grapples with a wavering moral compass at some point in the games. The show successfully depicts a multi-dimensional group of players, compelling the viewers to step into their shoes.

The show has transcended its origin in South Korea and has become a global sensation as the country’s first show to reach Netflix’s number one spot in both the U.S. and globally. This comes as no surprise, with comparable works such as the movie “Parasite” gaining tremendous traction outside of South Korea as well. Similarly to that film, “Squid Game” blends traditional genres; it is a drama, horror, comedy and psychological thriller wrapped into one. Despite some of the expected deaths and laughably dramatic conflicts between characters, there is a more profound commentary that underlies the drama that begs for discussion even after the credits roll. Just how realistic is the characters’ hunger for money, which they are willing to put their own lives on the line to satisfy? Does cruelty in the name of self-preservation excuse itself when the circumstances are so dire? Is money really the root of all evil, or does it simply reveal the evil that was there all along?

At first, my only qualm with the show was its unsatisfying ending, which falls short after the mounting tension established by the majority of the final episode. Rather than a classic Hollywood ending where our scarred victor unleashes his fury on the system that traumatized him and executed hundreds, the final moments are mostly left to interpretation. Only after sleeping on the idea, I realized that this route was more realistic. Gi-Hun keeps his promises to fallen friends, and despite the horrors he went through, he still emerges hopeful for humanity. While the ending leaves the possibility for a second season in the air, the lack of closure is arguably more cathartic. The show provides an unforeseen departure from an obvious finale, creating a final scene with an unexpected twist that lingers in the viewer’s mind long after it’s over.

“Squid Game” is perfectly bingeable, with frustratingly clever cliffhangers and suspenseful subplots that kept me captivated. While on the surface, the disturbing killings and unforgiving plot are characteristic of a typical “Battle Royale”-esque thriller, it is the unique backdrop and shocking character development that will tug on your attention and refuse to let go. 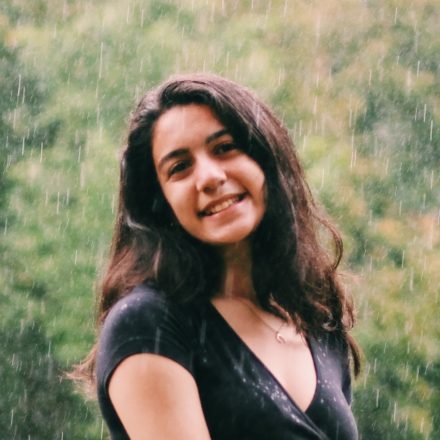 Nicole Semaan (she/her) (24C) is from Orlando, Florida, majoring in neuroscience and behavioral biology on a pre-med track. She is on the executive boards for Emory Synapse and the Emory Pulse. Despite her inclination toward the sciences, she enjoys poring over the intricacies of grammar. In her free time, she can be found making Spotify playlists or talking to her plants.