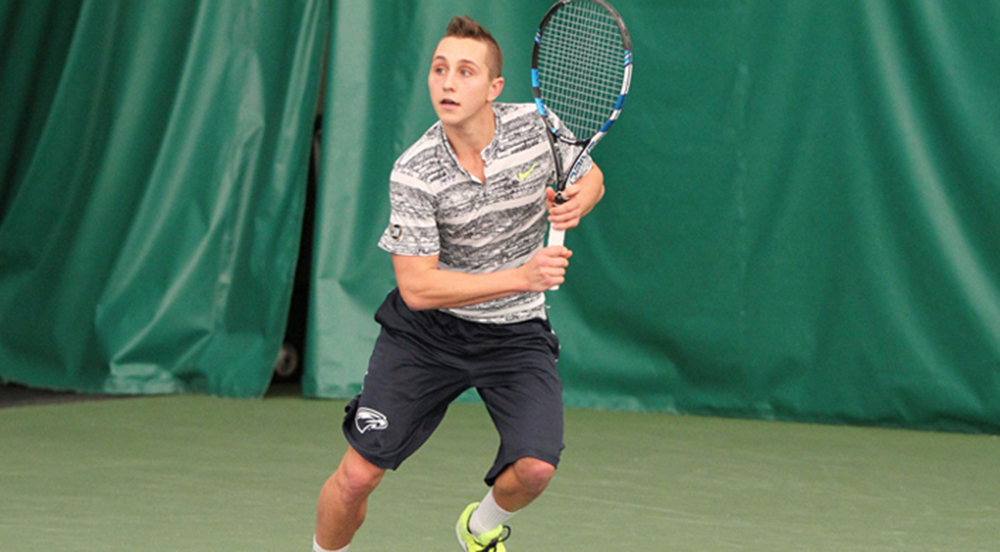 Junior Rafe Mosetick runs to hit the ball. Mosetick was named the University Athletic Association (UAA) Athlete of the Week this past week. | Courtesy of Emory Athletics.

This past weekend, the Emory men’s tennis team competed in the ITA National Indoor Championships in St. Peter, Minn. The team won its contests against Carnegie Mellon University (Pa.) and Washington University in St. Louis (Mo.) on Friday and Saturday, but fell to Trinity University (Texas) in the championship series on Sunday.

”These are the weekends that we have to train for, because when you get to the conference tournament and Nationals at the end of the season, you have to be ready to play three matches over the span of three days,” Ruderman said. “It was definitely more than we were used to thus far, but we have to be ready for it, and our team seemed to be in pretty good shape.”

In the next match against the Washington Bears, Ruderman once again came back after losing the first set 3-6 to defeat sophomore John Carswell 3-6, 7-5, 6-4 in first singles. Halpern bounced back after losing his previous two matches to defeat senior Ross Putterman 6-7, 6-3, 6-4 in the second singles spot. Mosetick played third singles once more defeating sophomore Jeremy Bush 4-6, 6-4, 7-5. Singles four, five and six spots all were wins for the Bears tying up the singles competition at 3-3.

“Our top three singles players all lost the first set of our match and all came back and won in three sets to clinch the match,” Ruderman said. “ I think that was a big statement to how resilient our team is.”

“WashU was a big rivalry match. They’ve been our biggest conference rival since I’ve been at Emory, and long before that,” Ruderman said. “Going into the match, they were the higher seed, and we played some outstanding doubles.”

In the title competition, the Eagles fell to the third-ranked Trinity Tigers 5-4. In first singles play, Ruderman fell to junior Adam Krull, 2-1. Trinity senior then defeated Halpern, again in the third set. Mosetick defeated sophomore Jordan Mayer 2-0, and the Eagles took two of the remaining three sets. In first doubles play, Ruderman and Wagner defeated Mayer and senior Aaron Skinner, 8-5. In the second and third sets, however, the Eagles fell to the Tigers.

The Eagles’ record is now 4-1 on the season, and they will continue their play at Troy University (Ala.) on Saturday, March 7.