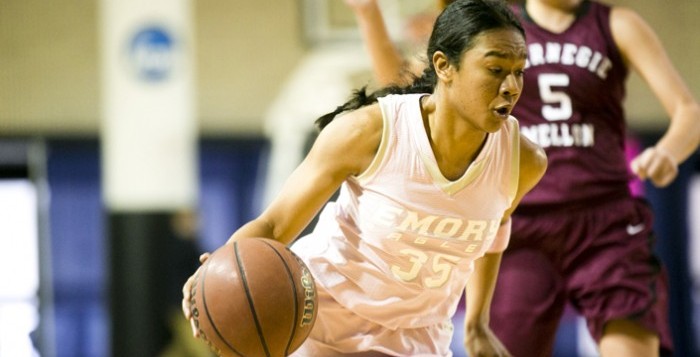 Junior guard Khadijah Sayyid dribbles past the opposition. Sayyid led the Eagles in points and tied with freshman guard Kennede Miller in rebounds with 18 and six, respectively, in the Eagles loss to Kennesaw State University (Ga.). | Photo Courtesy of Emory Athletics.

The Kennesaw State Owls dominated the Eagles from the first buzzer, beginning with a three-pointer from sophomore point guard Karly Frye off a pass from senior guard Kristina Wells 20 seconds in.

KSU senior guard Breonna Mosely led the Owls scoring effort with 18 points, but it took the whole team working together to reach 100 points.

“It was a total team effort,” KSU Head Coach Nitra Perry said, according to the KSU Owls website.

“It’s always great for us to have a good opponent,” Thomaskutty said. “It helps our players play better [against Division III opponents when] they’ve played someone with a [Division I] perspective. I’d always rather play a good team than a bad team.”

The game was the first college contest for the new freshmen on the team.

“Part of it was we’re a very youthful team,” Sayyid said. “You have nerves in your first college game. A Division I team can be intimidating.”

Thomaskutty was more confident in her team’s state of mind.

“They didn’t look scared,” she said. “They were pretty aggressive. It was a pace of play they weren’t used to yet, but they came out and competed.”

Upperclassmen also stepped up to lead the team throughout the game.

“Jk [Sayyid], Ilene [Tsao and] Shellie [Kaniut] have done great jobs taking on new roles. Shellie is running the point. They are all selfless,” Thomaskutty said.

The Eagles lost players due to injury before the game. Freshmen point guards Caroline Spurr and Whitney Carmack and sophomore guard Michelle Bevan were unable to play due to pre-existing injuries, Thomaskutty said.

Although the team took on Division II opponents in the recent past, they had not faced a Division I team, Sayyid said. Still, divisional categories can be misleading.

The team’s regular season away opener against LaGrange College (Ga.) on Saturday may be a more accurate predictor of this season.

“LaGrange is usually pretty good. It’ll be a good test to see how much we need to improve,” Sayyid said.

Last season, the Eagles started the season with a strong 14-0, but struggled when University Athletic Association (UAA) play began.

“The UAA is especially difficult. You have the wear and tear of the travel,” Thomaskutty said. “There’s not a big difference between the third and sixth place team.”

The Eagles finished sixth in the UAA with a conference record of 5-6 and a still impressive overall record of 16-9, missing out on a bid to the NCAA tournament.

The team’s goal is always to make the tournament, Sayyid said.

“[Last year] a couple injuries hurt us and we didn’t respond the way we needed to,” Thomaskutty said.

Despite the landslide loss, KSU helped the Eagles recognize what they need to do to be successful this season.

“If anything, it just showed what we’ve talked about,” Thomaskutty said. Take better care of the ball. Do a better job on defense. We have to win the glass.”

Moreover, the team has used this knowledge to focus their practice on those aspects of the game.

“I like how our players have responded this week. Win or lose, you want to be able to take something away and move forward,” Thomaskutty said.

Although the NCAA tournament is on their minds, the Eagles take the season one game at a time, according to Sayyid.

“You [have] got to have a short memory to be a great athlete,” Thomaskutty said. 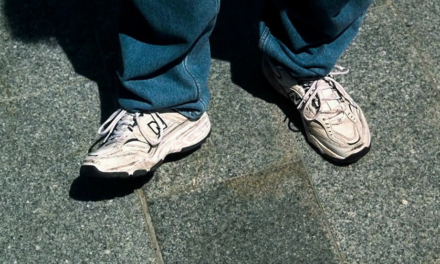