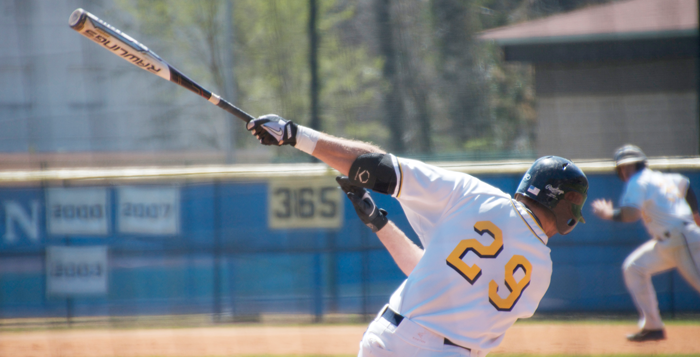 Michael Fier/Staff
Junior Jordan Selbach takes a hack. Selbach is batting .342 for the Eagles, who are approaching the stretch drive of their regular season. They lost 5-2 to Georgia Gwinnett College this weekend and will visit LaGrange College tonight.

The loss was a tough one for the Eagles, as it was their Senior Day at Chappell Park.

With the loss, the Eagles fell 25-10 for the overall season, while the Grizzlies improved to 41-8 for the year.

After falling behind 4-0 in the first two innings, Hannon led a comeback in the bottom of the third inning, driving a pair of runs with a two-out single.

The Grizzlies fought back, adding a run in the top of the fourth and preventing Emory from scoring for the duration of the game.

Hinojosa took the loss for the game after allowing four runs, three of which were earned, over two innings of play.

Gross and Bitanga each finished the game with a pair of scoreless innings.

On the Grizzlies side, starting pitcher Tyler Carpenter earned the win to improve to 6-1 in 2014. Meanwhile, the Grizzlies’ pitcher Zeke McGranahan pitched a scoreless ninth.

Junior Brett Lake and Toscano each went two-for-four. Kahn added a two-for-five game for another solid multiple-hit effort from the Eagles.

The game didn’t spoil what has been a very impressive season for Emory.

“This season has certainly been a success, although we all realize that we haven’t reached our potential,” Welch said. “We played well against GGC; they just played a little bit better, and that’s going to happen sometimes.

He continued: “What’s important is that we come back strong against LaGrange and then close it out against Huntingdon in a three-game series this weekend.”

The Eagles are starting their final week of the regular season. The men will be traveling to LaGrange College for a 7 p.m. game tonight.