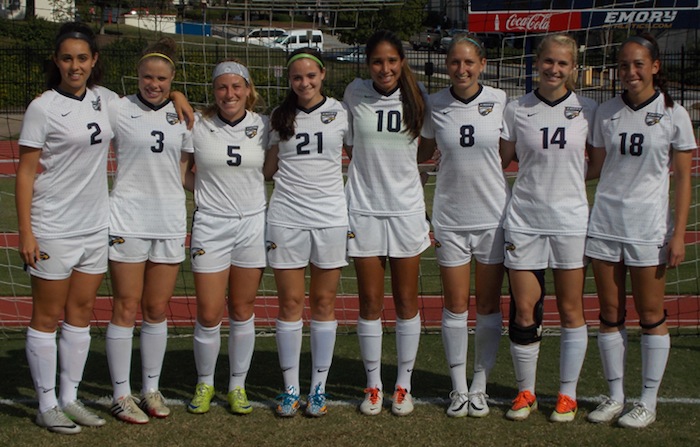 The 21-ranked women’s soccer team tied against the University of Rochester (N.Y) last Friday, finishing scoreless after two overtime periods. The Eagles now stand at 9-1-6 on the season and 0-1-4 in conference play.

It was a rainy, cold Halloween night, as the Eagles competed against a tough Rochester team. The conditions came out of nowhere, making the ball noticeably difficult to control. Yet, the Eagles did not let the conditions affect their play and were predominantly in control throughout the match.

The team found great difficulty getting shots on net early on. The first shot on goal for the Eagles came around the 21st minute of the match. By the end of the first half, the Eagles had landed only two shots on goal, displaying their difficultly in playing through the Rochester defense.

However, the game seemed to open up in the second half. First, senior forward Karina Rodriguez managed a shot on goal within four minutes of its start.

After Arnold made more clutch saves, Emory countered, earning a corner kick in the 57th minute. Senior forward Emily Feldman was able to get her head on the ball, but the header went wide.

The game then returned to being back-and-forth.

The Eagles powered-on more shots, but none made their way past Rochester senior goalkeeper Aubrey Jaicks, who finished the game with an incredible 11 saves.

“She was like a magnet. Everything was hit, and she was there,” Head Coach Sue Patberg said. “There were times where the ball was in front of the net and I thought we were going to score, but it just didn’t go our way. The good thing is that we played a great game and had more scoring chances than we have had in previous games.”

Perhaps the most important save of the match was Arnold’s fourth and final one, which came in with under two minutes remaining in double-overtime. The save secured the tie and gave Arnold her fifth shutout on the season.

The Eagles will return to action this Saturday, when they will travel to face University Athletic Association (UAA) opponent Carnegie Mellon University (Pa.).