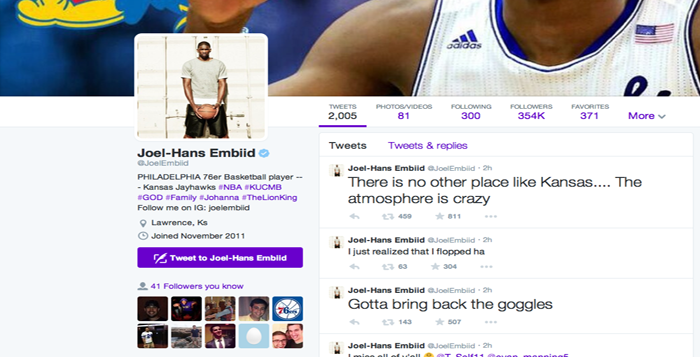 As the Sports Genie, I try to ask the tough questions. I consider myself a conversationalist, and my goal is to provoke meaningful dialogue on Emory’s campus.

There are many things that divide the members of the Emory community.

For instance, some think those who study business are selling their souls, while others think that those who are studying the humanities are wasting their time.

Then there are those who consider Greek Life to be the only way of life, and others who take pride in being GDIs (God Damn Independent).

Then we come to the really important disagreements. Does Rise n’ Dine or Flying Biscuit serve the best breakfast in the area? Is On Fire actually racist?

But despite these major disagreements, I think there is one thing that we can all agree on: Twitter is a wonderful thing.

An absurd amount of fantastic events have happened solely because Twitter is a thing that exists.

To be completely honest, none of those things are coming to mind right now, but nonetheless I am 100 percent positive that the above statement is completely true.

There is one man who epitomizes the glory and excellence that is Twitter. That man is NBA rookie Joel-Hans Embiid. He is widely considered (and by widely, I mean considered by both the Sports Genie and the On Fire correspondent) to be the best tweeter is the entire world.

As Phoebe Buffay taught us, all great artists are misunderstood in their own time. Embiid, however, has decided to tackle this classic problem head-on.

He recently informed his followers, “Alright we gotta find a way not to misinterpret some stuff #YOLO.”

This is an excellent plan. Loyal readers, just think about how much confusion could be cleared up if people just stopped misinterpreting stuff!

As the Sports Genie, I am often misinterpreted. But that is the price one must pay for being a conversationalist, asking the tough questions and promoting dialogue for the greater good.

I just wish that I had the same clarity of expression as Embiid, so I could confront the misinterpreters head-on.

But not only does Embiid make important and groundbreaking statements on the proper relationship between society and its artists. He is also an amateur anthropologist.

As he tweeted on Sept. 5, “I think we’re ALL related #WeAllFromAfrica #wemakinghistorytogether.”

This is a profound insight from my cousin Joel-Hans Embiid. Keep up the good  work– I am proud of everything our family is doing.

Joel-Hans is also an avid gamer, as his Twitter feed makes abundantly clear. “Can’t wait to play my PS2,” he tweeted on Sept. 5. But video games are more than just entertainment for Embiid – they are a solace for him in this dark and lonely world in which we live.

I’m glad that he has video games as well.

On Sept. 1, Joel-Hans was “Chilling in the bathroom now you know what’s up.” Presumably, he was playing “2048” while dealing with some digestive issues, but that is really just a theory of mine.

This is why I ask the tough questions. This is why I refuse to buckle under the pressure from editor after editor to be a conformist, a stereotype, a zombie mindlessly following the leader through this great maze we call life.

I encourage all my readers to do the same.

So my editor just informed me that I have to conform to an assigned word count, as at the moment this column is about 75 words too short. Since I am a pushover who talks a big game but really has no backbone, I will fill up the rest of this space with a short anecdote about DeMarcus Cousins.

Cousins is the center for the Sacremento Kings, and also a member of Team USA.

He was recently asked by a European journalist if he knew where Slovenia was. Cousins replied, “Do you know where Alabama is?”

My sources have been unable to confirm how the European journalist responded.