Speculating on the Boston Bombing

Now that a full week has passed since the Boston Marathon and the horrible bombing that resulted in what we now know to be three deaths and over 180 injuries, we know a great deal more than when we started out. After the climactic events on Friday, in which police engaged in an aggressive shootout with suspects and the city of Boston was virtually shut down as part of an ongoing manhunt, one of the culprits was killed and police finally detained the other.

The brothers Dzhokhar and Tamerlan Tsarnev, aged 19 and 26, were identified by law enforcement as the two individuals responsible for the two homemade bombs that went off in the crowds at the Boston Marathon finish line.

The two bombs – in addition to a third that the brothers set off during their later fighting with police – were built out of pressure cookers and packed with ball bearings and nails to maximize their potential damage.

After law enforcement officials released the brothers’ photographs, they reportedly ambushed and killed an MIT police officer. They then carjacked a vehicle, taking the driver hostage, and shortly after midnight engaged in the shootout with police. Tamerlan was apparently shot in this engagement, and some sources report that Dzhokhar ran him over with an SUV in the confusion while he was attempting to escape.

Though the shock of the events is still very fresh, and investigations are still ongoing, some initial facts have begun to paint a picture of what motivated the two brothers and led to the bombing.

The Tsarnev brothers were Muslim immigrants of Chechen descent who came to the United States in 2002 after their father was granted both political asylum and, later, refugee status due to his connections with Chechnya.

(The Chechen Republic has been involved in a number of protracted battles for independence with the Russian Federation until as recently as 2000, when Russian troops assumed direct control of the Chechen government and engaged in years of bloody conflicts with separatist resistance forces.)

Tamerlan, the older brother, was married with one young daughter. He was an aspiring boxer, though due to back problems had only won a few regional titles.

In 2008, he began to devoutly practice Islam. The FBI was first warned in 2011 by Russian authorities that Tamerlan had radicalized, but due to a lack of clear evidence and a failure of ongoing cooperation from Russian law enforcement groups, the FBI closed his file later that year.

In January 2012, Tamerlan traveled to the North Caucasus region in Russia, where Chechnya is located, and officials have commented that they believe Tamerlan received training from Muslim extremist groups in the region during that trip.

Upon returning, he took an even more radicalized position that at points became disruptive. Tamerlan loudly disrupted a Martin Luther King, Jr. Day service at a Mosque in Cambridge, shouting that the imam should not be teaching about King because he was not a Muslim.

Dzhokhar, by contrast, did not undergo the same sort of radicalizing transformation that his older brother had undergone. Graduating from high school as an all-star wrestler in 2011, he was awarded a $2500 scholarship by the City of Cambridge to attend college. Former acquaintances of Dzhokar from that time described him as very admiring of his older brother, almost puppy-like in his devotion.

College friends described Dzhokhar as relatively normal and popular, and while one of his social networking profiles had links to Islamic websites and videos of fighters in the Syrian war, his friends mentioned that he never discussed politics.

However, he began to struggle academically, and at the time of the bombing had failed seven courses over three semesters.

It is still early in the investigation, and most of the assumptions being made to this point are speculative.

However, if these reports are in fact true, the chain of events actually paints a rather tragic picture for Dzhokhar. It is possible that Dzhokhar joined in his brother’s plans to wreak havoc out of admiration of and love for his older sibling, in addition to his frustration at his academic struggles.

Little evidence uncovered up to this point suggests that he had radicalized.

Tamerlan, by contrast, clearly had accepted radicalized Islamic philosophy, and in his brother, he may easily have found a supportive accomplice.

Unfortunately for Dzhokhar, he alone survived the shootout with police on Friday night.

Should the evidence against him bear out, he will be convicted of his crimes, and he will face the consequences that come with willingly engaging in acts of terror against American citizens.

And the families of the hundreds of dead and wounded from the Boston Marathon will breathe easier knowing that the person who harmed their loved ones is being brought to justice. 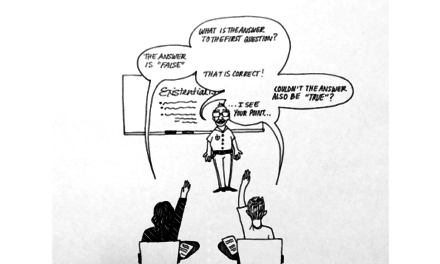 A Message From Dean Forman to the Faculty: A Follow-Up to Wednesday’s Faculty Meeting