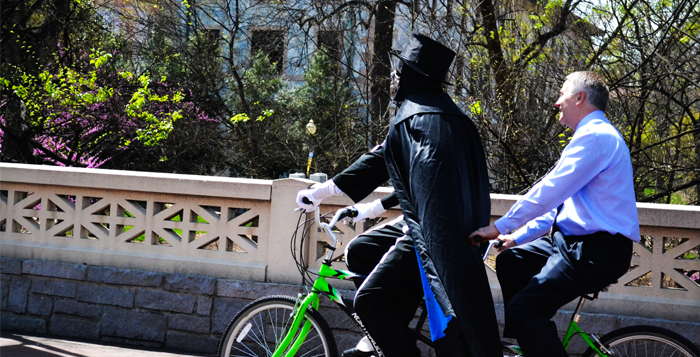 Erin Baker/Staff
At the Wonderful Wednesday of Dooley’s Week, President James W. Wagner and Lord Dooley rode a bike from Asbury Circle to the Cox Hall Bridge. Also at the event, students participated on a large, inflatable slide, received free drinks and snacks and stopped by the various booths lining the circle.

Atlas noted that because the events are being combined into one, the extra festivities and giveaways that were planned for Friday will be combined with those planned for Saturday to make for a “much bigger” event.

As part of the merged event, there will be even more food and shirts for students at the concert, according to Atlas. He added that SPC is currently working to bring food trucks to the event as well.

Although the SPC anticipates Saturday’s event to be even better than originally anticipated, many are disappointed with the cancellation of the Friday’s concert, including 5 & A Dime.

Greg Kantor, who uses the stage name 5 & A Dime, tweeted yesterday in response to a fan at Emory, “[The show] just got canceled :'( you guys got hail coming your way and thunderstorms I was so looking forward to it.”

SPC confirmed on Facebook to students later in the day that the concert had been cancelled.

“We are first and foremost concerned with the safety of Emory students, faculty and staff,” the SPC Facebook post read. “We waited as long as possible to make a decision regarding the Friday night concert, however, given the intensity of the forecasted storms, SPC must follow protocol in order to ensure the safety of all Emory affiliates.”

SPC has spent the last few days monitoring the weather forecast leading up to yesterday’s decision to cancel, according to Atlas.

Atlas said that when SPC last looked at the weather forecast it cited a 90 percent chance of thunderstorms in the Atlanta area.

“Basically, we realized it could not be thrown on the field … 5 & A Dime’s manager was actually emailing us with his own concerns about the event and, this late in the game, we really didn’t have another venue, and we had to ultimately come to the decision to postpone the event and merge Dooley’s Ball with Spring Band Party.”

Atlas added that SPC considered other indoor venues on campus, including the Woodruff Physical Education Center (WoodPEC), but determined they were not feasible.

“We threw Dooley’s Ball in the WoodPEC four years ago, and there were just so many restrictions,” Atlas said, adding that for that option to work, SPC would need a tarp to cover the entire gym floor.

“There were also concerns of kids getting sick and passing out behind the bleachers,” Atlas said. “It was just a big safety concern as well as a logistics concern.”

5 & A Dime also expressed similar disappointment with the show’s cancellation.

“Yeah, it sucks,” 5 & A Dime said in an interview with the Wheel, “I was actually really excited. Just the fact that I performed the last year with Kendrick Lamar and now I had the opportunity to headline the same stage … would have been phenomenal. Trust me, if it was up to me, I would still be flying down there.”

Atlas added that although the performance has been cancelled, SPC plans to reschedule 5 & A Dime for later this year.

The artist could be rescheduled for later this semester or for a back-to-school event in the fall, according to Atlas.

Although frustrated by the cancellation, 5 & A Dime was optimistic that there would be another opportunity for him to perform at Emory.

Students are also disappointed with the cancellation but understand that student safety was the deciding factor.

“I’m sad that we’re missing out on Dooley’s Ball, but I understand why they canceled it,” College senior Meghan Daly said. “I would rather not go than be covered in mud or be electrocuted.”

College freshman Ashraf Patel expressed that although he was disappointed that the concert was cancelled, he’s looking forward to Chance The Rapper on Saturday.