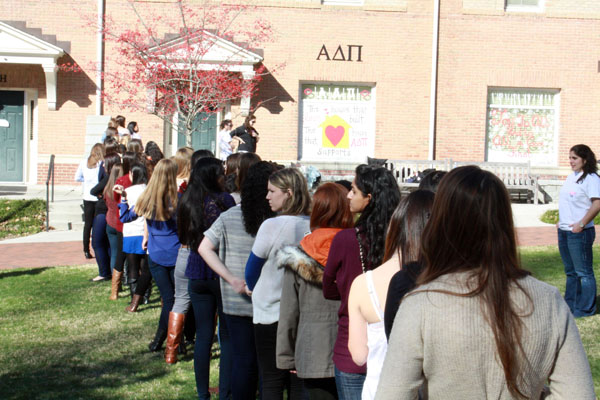 The number of bids given during this year’s underclassmen sorority recruitment rose about 50 percent. This change resulted from an increase in the number of sorority participants, and the fact that Alpha Epsilon Phi (AEPhi), whose charter was revoked in 2011, and Sigma Delta Tau (SDT) did not participate in rush, according to College senior and Intersorority Council (ISC) President Camille Sheppard.

This year, 470 girls participated in recruitment, up from 405 last spring. Eighty percent of girls, or 385 rush participants, received bids – a rise from the 65 percent of rushees who were offered bids last year, according to Megan Janasiewicz, director of the Office of Sorority and Fraternity Life.

If a rushee maximizes her options – meaning that they mark two sororities as their top choices during “pref night” – it is recommended that she receives a bid, Sheppard wrote.

The number of accepted bids was not available by press time.

Meanwhile, Sheppard wrote, with fewer sororities on campus, other sororities “are often able to take larger pledge classes.” SDT is inactive this semester, Sheppard wrote, so they did not hold a formal recruitment. The University revoked AEPhi’s charter in spring 2011 due to alleged hazing violations (Read more about SDT in the next issue of the Wheel.)

The rise in the number of rushees was also, in part, the result of a larger freshman class for the class of 2016, Sheppard added.

“It’s really only a good thing that more women are excited to be part of the Greek community and do great things,” Janasiewicz said.

Sheppard explained that in addition to these factors, ISC hosted new recruitment events this year, including a “hot chocolate mixer” to increase interest in sorority life. ISC also changed the format of other events, such as Sorority 411, which is an opportunity for potential Greek life members to learn more about the experience through a panel and dinner event.

While Sheppard said the process “will always have some bumps” with so many participants, she is satisfied with this year’s recruitment. She wrote that Jordan Krant, the vice president of recruitment and a Goizueta Business School senior, did “an amazing job of getting girls to register and then making sure the process ran as smoothly as possible.”

The number of fraternity accepted bids decreased slightly to 223 this year from 234 last year. A total of 322 were given.

College junior and Interfraternity Council (IFC) President Jason Stern explained that for the first time, the Office of Sorority and Fraternity Life discussed Greek life during presentations at freshman Pre-Major Advising Connections at Emory (PACE) sessions in the fall in order “to inform [freshmen] about Greek life and about the benefits of joining a Greek organization.”

IFC also expanded its Sunday Night Dinner program, during which potential fraternity members have the opportunity to enjoy free dinner from local restaurants and meet fraternity brothers at their houses on Eagle Row.

According to Stern, each fraternity was able to host two dinners, rather than one, this year.

“Almost all of the chapters chose to host an additional dinner, which speaks to the success and popularity of the program,” Stern wrote in an email to the Wheel.

Rush week annually culminates in Run the Row, when pledges run down Eagle Row to their respective fraternity houses. This year, Run the Row took place on Friday, Jan. 25.