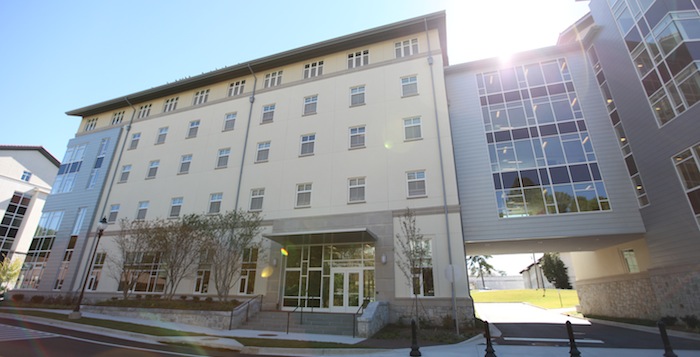 Unlike Resident Advisors (RAs), who are compensated with $8,984 in housing, a $1,500 stipend and two credit hours for a training course, SAs are volunteers. SA benefits include early residence hall check-in, a move-in T-shirt, training meals, leadership experience and “new friends and fun,” according to the position description.

Students can apply to be an SA halfway through their freshman year. If accepted, SAs complete staff training before starting the school year. SAs are not required to be available for residents during certain time periods, patrol the building during designated rounds or file incident reports, all of which are tasks required by RAs. SAs do coordinate floor community building programs and mentor their be first-year residents.

“It’s a weird conflict between wanting to do something that you genuinely are passionate for —helping others, being engaged in the community, trying to help people with their first-year experience — [but] also feeling like your work [should be] compensated,” Bole said.

While he said the “sentiment of the SA position is one that should be paid,” he credited the town hall as a welcome avenue to voice his “biggest concern at the time.”

The Sept. 16 town hall occurred over Zoom and organized by Residence Life, with Senior Director Scott Rausch present along with all complex directors, for students and student staff to voice general housing concerns.

Residence Life held another forum on Sept. 30 to facilitate further discussion about SA compensation to be reviewed by the Residence Life Selection Team, according to Vice President of Academic Communications Nancy Seideman.

Seideman also told the Wheel in a Sept. 28 email that the SA position “was originally designed as a volunteer position that would allow sophomores to give back to first-year communities” and “has always been a volunteer mentor and programmer position.”

Rausch met with Bole individually on Sept. 29 to discuss SA requests for compensation, and according to Bole, Rausch said the SA role “started out as more of a lenient position but has come to take on more responsibility over the years.”

Bole felt that Rausch was “on the same page about a lot of things,” including a “forward direction” toward compensating the position, although Rausch did not review any specific form of compensation.

Praneeth Kolli (23C) told the Wheel that being an SA is “so much more than a volunteer position.”

“Residents will call me at like 11 p.m., and say, ‘Hey, I’m freaking out about this club application; what do I do?’” Kolli said. “I’ll gladly help them. But at the same time, that’s not a typical volunteer position. I’m busy; I have my own work to do. It’s not necessarily a 24/7 job, but I’m living with the people I volunteer for 24/7.”

All the SAs that spoke to the Wheel pointed to the impact of their own SAs in their first-year transition as motivation for taking the volunteer position.

“I really liked the concept of helping lead community bonding with freshmen especially this year,” Kolli said. “A lot of people become SAs knowing there aren’t any major benefits for them.”

SAs pointed to housing as a fair form of compensation; Oxford campus RAs, who are sophomores, have the same responsibilities as main campus RAs and receive free housing. Kolli underscored that “it seems very fitting that we live in first-year housing, and we’re doing this not as a typical resident.”

Ahmed Abdel Naby (23C) emphasized that this is “an extraordinary year” to be an SA while dealing with COVID-19 restrictions, and he hopes current SAs can receive some form of compensation for their work this year.

However, Kolli and Bole view compensation for future SAs as a more realistic and significant goal.

Bole echoed these sentiments, adding that the responsibilities that come with being an SA should mean they are compensated for their work.

“I think the only way or only world in which it shouldn’t be compensated is if the position was drastically redefined in terms of responsibilities and engagement,” Bole stipulated. “That’s really the only way. You would have to drastically minimize the workload to really consider it a genuine volunteer position, but I think at that point it would also lose its purpose.”

All SAs were aware that the SA position was unpaid throughout the application process, which involved submitting three essays, a letter of recommendation, an interview and signing a contract. However, the understood lack of compensation did not deter them.

“I knew I wanted to be an SA months before the application opened,” Abdel Naby said. However, deciding to return to campus was “one of the hardest decisions [he’s] had to make so far at Emory because of the financial aspect.”

Abdel Naby ultimately decided that going on campus to be an SA was worth paying housing and dining fees for the semester. However, without compensation, he was seeking a work study job to cover expenses but had not yet heard back from the jobs he applied to.

Bole said he was completing a work study position while balancing the time commitment for being an SA. “I’m naturally just better with time management, so I make the time.”

In the case of SAs, Johnson said, “I think they’d run into a brick wall trying to become an employee.” First, the students agreed to volunteer for their work. Second, SA work is closest to that of RAs’, who themselves are not considered employees under the FLSA.

“You’re really back to a fairness argument, which I think is the best argument anyways,” Johnson added.

Considering other universities’ compensation practices, University of Georgia Resident Assistants and C.L.A.S.S. Advocates are compensated with housing, ranging from $4,908 to $8,272 per year; a staff meal plan, valued at $2,170; and a stipend, paying $2,136.88 the first year as an adviser and $2,291.35 after.

The Georgia Institute of Technology has Resident Advisors (RAs) and Peer Leaders (PLs), similar to the Emory SA position. Both positions receive housing, ranging from $6,640 to $10,648, as well as a $817 RA stipend and a $600 PL stipend.

At Vanderbilt University (Tenn.), a peer institution, RAs are given housing, valued at $11,540, although financial aid adjusts in some cases, and a $2,000 stipend.

When pressed on why SAs should receive compensation if such volunteers can fill the position, Kolli told the Wheel, “Yeah, people will always volunteer for it, and there will always be SAs without the demand, but that doesn’t necessarily make it right.”

Prior to the Sept. 30 follow-up discussion, Bole was satisfied with the opportunity to voice his concerns.

“Whether or not Sophomore Advisors get compensated is the number one thing on everyone’s mind right now,” Bole said. “I think that it is a way that the University can show that it cares for and acknowledges the hard work being done by its students.”