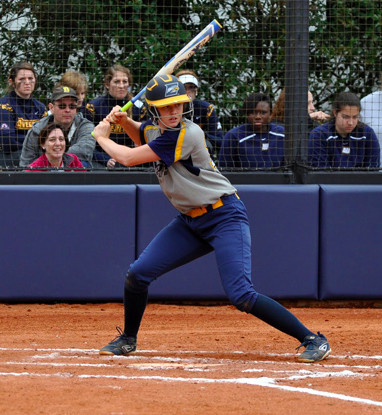 The long ball was a major reason that Eagles were able to win the title. Over the course of the 10 game tournament, the Eagles hit 20 home runs. Junior pitcher Brittany File carried the load on the mound, throwing 33 innings over the 10 games with an ERA of 1.36 and striking out 52 batters.

Emory started the tournament off with a decisive 11-3 win over the University of Rochester (N.Y.) in five innings because of the mercy rule. Sophomore first baseman Ashley Powers, sophomore second baseman Janelle Turnquest and junior left fielder Taylor Forte all contributed to the offense in a big way, with each of them hitting a home run. Junior pitcher Brittany File worked three innings, notching seven strikeouts and a win in the process.

Later that day, the Eagles beat Case Western Reserve University (Ohio) 7-5 in 10 innings. File pitched seven innings, striking out 11 while picking up her second win of the day, and Turnquest hit another home run. Case Western’s mistakes eventually gave the Eagles the game, as they surrendered two unearned runs in the top of the 10th  inning.

Next, the Eagles took down Washington University in St. Louis (Mo.) 6-1. Both Turnquest and junior outfielder Amy Wray went yard in the game to help lift the offense. File, pitching her third game in a row, picked up another win. She finished with nine strikeouts over seven innings of work, while allowing only one earned run.

Emory defeated New York University 4-1 in the fourth game of the tournament. While File didn’t start the game, she came in relief and picked up the save and finished the game with seven strikeouts over three innings of work. Freshman shortstop Cassie Baca led the way with a three for three afternoon at the plate. Senior catcher Melody Carter doubled in a run, as well.

In the fifth game of the tournament, Emory dominated Brandeis University (Mass.) 11-2, eventually winning in five innings on the mercy rule. Emory’s impressive display of the long ball continued as Turnquest, Powers and Carter all homered in the game. On the mound, sophomore pitcher Audrey Weller notched the win with three innings of work while allowing two runs.

The next game saw Emory beat Rochester again, this time by a score of 6-2. As a team, Emory was very patient at the plate, walking seven times in the game. The other big offensive boost came on a third inning home run from Powers.  File grabbed yet another win in the tournament, finishing with 10 strikeouts over four innings of work.

Later that afternoon, the Eagles played and defeated Case Western again, 7-2. At the plate most of the offense came from Baca and Carter, who both hit solo home runs. File, pitching for the fifth time in the tournament, notched yet another win with seven strikeouts over four innings of work.

The next game saw Emory take on, and once again defeat, WashU 3-1. The Eagles again relied on the long ball, with Carter’s two-run blast and Turnquest’s solo shot accounting for all of their runs. File pitched all seven innings to pick up her fourth win of the tournament.

Emory then took on NYU again, winning by a score of 7-4. Turnquest homered again — no surprise there — and freshman first baseman Emmeryn Wheelan contributed a home run of her own. Weller picked up the win with nine strikeouts over six and one-third innings of work.

In the championship game, Emory cruised to a victory over Brandeis, winning 13-5 to secure the UAA Championship title. Carter, Baca and senior outfielder Alyssa Pollard all homered, and Weller picked up her sixth win of the season. Weller pitched four innings of work while giving up only two hits and no runs.