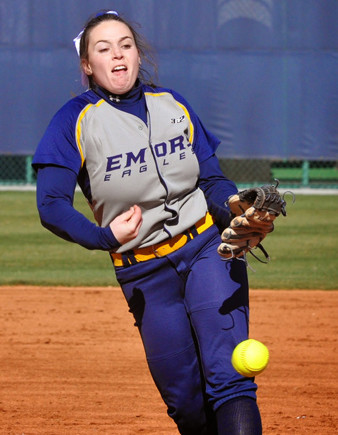 The Emory softball team started off the season by hosting the 3n2 Elite Event this past weekend. The event consisted of two teams: Agnes Scott College (Ga.) and Huntingdon College (Ala.). Both played Emory twice, once on Saturday the 13th and once Sunday the 14th. Emory crushed its competition this weekend, winning all four games by at least four runs.

In the Eagles’ first game on Saturday, they took on Agnes Scott College and easily won 19-1. The game ended in the fifth inning due to mercy rule. Emory had 17 hits led by junior first baseman Taylor Forte and senior third baseman Melody Carter. The most impressive part of Emory’s opener was their eleventh run fourth inning that clinched the win.

Emory’s second game Saturday was against Huntingdon College, and from the start, it was clear that junior pitcher Brittany File was going to dominate. File was absolutely brilliant, as she threw a no hitter over seven innings of work, leading Emory to a 7-0 win.

File was locked in all game and struck out 14 batters. She never lost control and threw a game that few others are able to. This was File’s second career no hitter after throwing a perfect game against Rhodes College (Tenn.) just last year.

In the win against Huntingdon, Forte shined once again by going three for four with a double. Junior right fielder Amy Wray also had a double and two runs batted in to lead Emory to their second consecutive victory.

For the Eagle’s first game on Sunday, they had a rematch against Huntingdon College. The game ended with an Eagle win sand a final score of 7-3.

The lady Eagles had 14 hits and were helped out by freshman shortstop Cassie Baca and outfielder Jenna Wilson who had three and two hits, respectively. File started the game and picked up her third win after throwing four innings and fanning seven hitters.

For the final game of the weekend, Emory once again mercy ruled Agnes Scott College by crushing them 15-3.

Emory had another offensive outburst, collecting 15 hits. One of the hitters to highlight is freshman catcher Tori Risner, who had two hits with four runs batted in, including her first career home run.

Emory’s softball team plays again next weekend, as they will host DePauw University (Ind.) and Averett University (Va.) in another 3n2 event on Saturday, Feb. 20 and Sunday, Feb. 21.