This past weekend, Emory’s volleyball team traveled to the west coast and competed at the East-West Battle tournament in Thousand Oaks, California. After three matches of fierce competition, the Eagles came out of the tournament with a 1-2 record.

On Sept. 10, the No. 2 Eagles battled Trinity University (Texas), the first-ranked team in the nation. In the first game, the Trinity Tigers won nine of the first 10 points. Although the Eagles scored six straight points down 18-6 in game one, the deficit was too much to delete. Both the second and third games followed similar rhythms with the Eagles starting the game down and not being able to complete the comeback. The Eagles lost in straight sets, with scores of 17-25, 19-25, and 15-25.

Despite the loss, the Eagles left their mark on the court with confidence. Freshman right side hitter Alana Dawson, who had 10 kills in the match, spoke highly of the team morale during their game.

“There was no doubt in anyone’s eyes during the game, we all trusted each other,” Dawson said.

The East-West Battle was also Dawson’s first road experience as an Emory volleyball player. While the sport and mindset are the same, the jump up to a higher level adds some new challenges for an experienced player.

Emory won the fourth set with their backs against the wall, winning six straight points when the score was tied at five and completely shifting the momentum. The Eagles went on a 20-10 run to force the fifth set, and they won 15-11 after ending the match on a 6-2 run.

Emory wrapped up the weekend by facing Claremont-Mudd-Scripps Athenas (Calif.) on Sept. 11. While the Eagles fought a long and hard battle, they could not squeeze out a victory, ending the tournament with a 3-1 loss (25-18, 22-25, 25-13, 25-19). Despite the loss, Dawson and Martin both had impressive matches in addition to freshman Sarah Luong who finished with 40 assists.

Head Coach Jenny McDowell was proud of the team’s efforts going up against the country’s best teams. Even though the tournament was not a success, McDowell recognizes the season is just beginning and hopes to get stronger before the end of the season in November.

“It was an amazing weekend for our team,” McDowell said. “[We] would’ve liked to come home with three victories, but we learned so much about ourselves and competed every single point.” 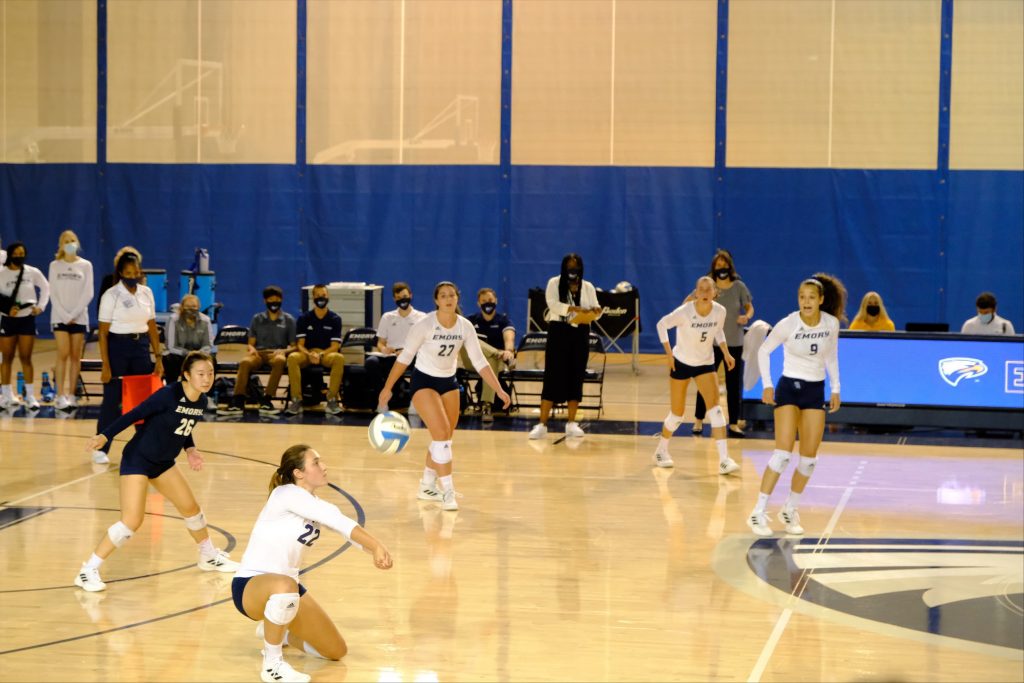 Emory volleyball playing in the Emory Classic on Sept. 3. The following weekend, the squad traveled to California to play in the East-West Battle. (Lin Yu/Contributing Photographer)

Olivia McBerry (24C) is from Bethesda, Maryland, and is on the pre-med track. Outside of the Wheel, she plays on the Emory women’s soccer team. She is also involved in Emory Pre-Health Shadowing, which connects undergraduate students to doctors and health care workers at Emory Hospital.