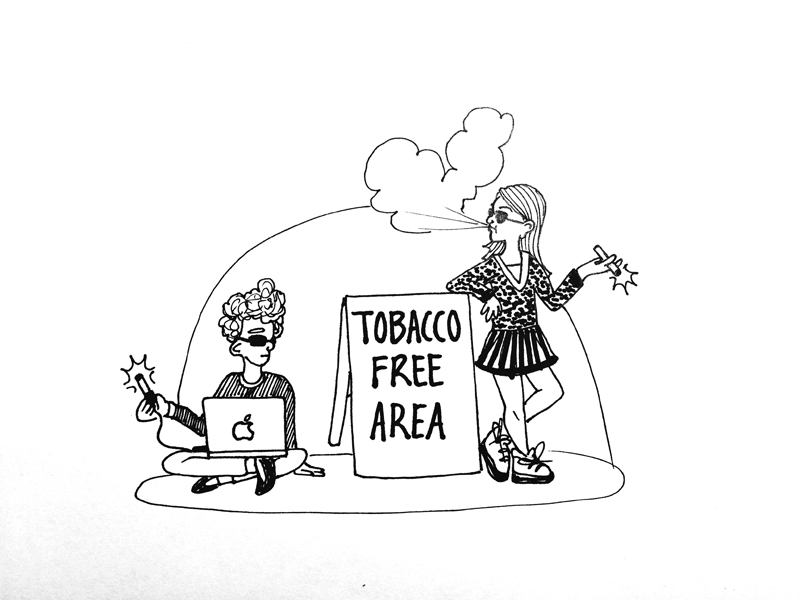 It is common knowledge that people smoke cigarettes behind the bushes outside of the back end of Bowden Hall. Since Emory has a tobacco ban, it does not provide these smokers with the proper means of disposing of their cigarette butts. Thus they litter, much to the chagrin of Emory’s maintenance staff, who has to clean the mess up.

Last week, the maintenance staff came up with a practical way to alleviate this littering issue. They placed white buckets quarter-filled with sand throughout the area to serve as ashtrays. Within a single day, the amount of littered cigarette butts became virtually nil. But by Monday, the ashtrays were gone, and the littering is once again rampant.

Emory prides itself on being a 100 percent tobacco-free institution. But perhaps this pride ought to be reevaluated. Many tobacco users, primarily cigarette smokers, exercise their habit on campus every day with unabashed determination. Case in point: at the beginning of the fall semester, a sign was placed at the Bowden Hall smoking area to ward off potential smokers. It was immediately thrown into a nearby creek, where it stayed for two weeks to the amusement of those who passed by. Later, it was placed back in its original spot, where it remains untouched, apparently out of an unspoken respect among smokers for whoever was forced to retrieve it. The sign warns that the area is being monitored and that repeat offenders will face disciplinary action.

It is unlikely that repeat offenders will be issued anything like a citation, however, because the tobacco ban is “community-enforced,” as stated on the Emory website. This means that it is up to the Emory community as a whole – not the police – to enforce the policy. The utter ease with which one can get away lighting up a cigarette behind Bowden Hall indicates an overwhelming sense of apathy towards the issue on the community’s part. Perhaps this apathy stems from the fact that we as a community never actually agreed to carry the responsibility of enforcing a tobacco ban.

Another reason for the community’s indifference towards the policy could be that we realize what the administration doesn’t: that a blanket ban on smoking is as senseless as the very act of smoking itself. Most smokers know what they are doing to their bodies, yet they smoke nonetheless. If the prospect of detriments to their health, up to and including death, is not enough to stop them, then there really is not much else anybody can expect to do about it. Likewise, the self-destructive nature of smoking was emulated by the administration this week with the removal of those ashtrays. In doing so, the administration did nothing to support its anti-smoking policy. Instead, it undermined an effort by its own employees to mitigate the littering of cigarette butts.

Fighting poor logic with equally poor logic was not the initial tactic employed by the administration. At the start of the ban, there were 14 designated temporary smoking zones where smoking was permitted in order to facilitate the transition to a tobacco-free campus. Such spots kept people from smoking on the go and made the practice much less visible to the public eye. Now these zones are gone, and what remains is a situation where smokers, fully aware of the tobacco ban, have created their own smoking areas around campus.

If the administration has a problem with this situation, it could do one of several options. The first option would be to make a serious effort to raise awareness of the community’s responsibility in enforcing the ban. One easy way to do this would be to actually update tobaccofree.emory.edu at least semi-regularly.

The severely neglected website contains outdated sample scripts designed to “train” students, faculty and staff on Emory’s tobacco-free policy. One such script reads: “Hello, my name is _______, and I am an (employee, student) here at Emory. I want to make you aware that we are now a tobacco-free campus … meaning that tobacco products are prohibited on our grounds. This new policy went into effect on January 1 [2012]. Thank you for your cooperation.”

Another option would be for Emory to hire others to do their dirty work. Aluminum-bat-wielding patrol squads would be an effective deterrent against public smoking. Just a joke, though it would sure convince me to take my habit elsewhere. An even more effective deterrent might be for Emory to pay smokers to participate in cessation programs. Such an altruistic use of Emory’s funds would surely be lauded by the observing world.

The point is not exactly that Emory should enforce its tobacco ban more rigorously, but as long as Emory remains unwilling to crack down on the persistent use of tobacco products on its “tobacco-free” campus, the small jabs like taking away our ashtrays must cease. Such passive-aggressive behavior is unworthy of the 21st-best college in the nation.