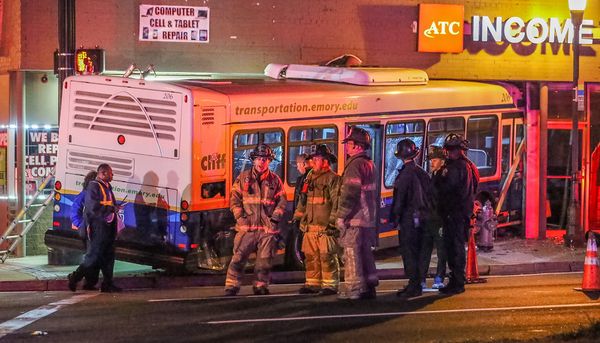 An Emory University bus crashed into a building at the intersection of Candler Road and Glenwood Road just after 6 a.m. on Dec. 8, according to 11alive.

DeKalb County Police said a non-emergency ambulance ran a red light and hit the bus. The bus then crashed through the front glass of the building that houses the offices of ATC income tax company and 360FIXX. Firefighters said that 10 of the 12 people on the bus were taken to Grady Memorial Hospital with minor to moderate injuries, according to CBS46.

Police said 20-year-old ambulance driver Lemonte Weaver told them he fell asleep while he was transporting a dialysis patient. According to video on 11alive, the Urgent Care Medical Transport business was found by the state to be a licensed business, but the ambulance driver had not had Emergency Medical Technician (EMT) training, which is required to get a state license.

After the accident the patient was briefly trapped inside the ambulance, according to Fox 5 Atlanta. DeKalb County firefighters rescued the patient, who was then transported to Grady Memorial Hospital after dismantling the back door of the vehicle, Fox said.

The bus driver, identified by DeKalb County Police as 62-year-old Floyd Thomas, was in moderate to critical condition the evening of the crash but is now in stable and good condition, DeKalb County Fire Captain Eric Jackson told CBS46. However, the ambulance driver was also not seriously injured.

All eight taken to Grady were in good or stable condition Tuesday afternoon, and the two taken to Atlanta Medical Center were in good condition, according to Emory spokeswoman Elaine Justice.

“This is just surreal,” David Gherezgher, the owner of ATC Income Tax told Fox 5 Atlanta, “Fortunately, our office wasn’t open. But I’m just so glad no one was still standing [at] the MARTA bus stop … they missed this horrific accident by just a matter of minutes.” He said that his 14-year-old business is now just a pile of rubble and broken bricks.