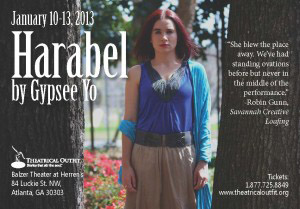 The show consisted of an assortment of stories from her life and the lives of other Albanians, blending truth and fiction to most accurately portray to the audience her experiences, which Beqo calls “magical realism.”

The show began with Beqo silently working at a table with a sewing machine and an array of sewing supplies.

The set also included a clothing rack filled with coats and suits, a large chest, two elevated platforms and a group of mannequins.

Suddenly, Beqo looked up with surprise, as if she had just noticed the audience’s presence.

With a bright smile, she exclaimed, “Welcome to the backstage!”

Following a humorous spiel in which she confused the audience for patrons of the theater, Beqo proceeded to explain that as the actors performed their show on stage, she, the seamstress, had her own show backstage.

The lights dimmed, and a beautiful, haunting voice began to sing in Albanian in the background. Slowly, Beqo approached the chest and opened it.

She pulled out dresses, one by one, and danced around the set, hanging each dress, all symbols of her past, on different props.

As the music ended, she told the audience the significance of each, hesitating as she picked up a tight red dress with a deep neckline.

This dress, she explained, was proof that she had “mastered the art of fitting into tight foreign languages” and represented her struggle to adjust to American culture.

As the show progressed, Beqo switched back and forth between stories of her Albanian life and her American life.

Among her accounts of her Albanian childhood, startling images of scattered body parts and kids of her neighborhood driving a stolen army tank struck the audience.

Yet these moments of chaos were juxtaposed against Beqo’s moments of happiness. In one story of her Albanian life, Beqo spoke of her first date with her future husband in a zoo abandoned and full of “empty cages” due to the war.

In the background, machine guns fired, which Beqo jokingly said “made for terrible first date music.” With a smile, she described their first kiss and how their “bodies careened into an unconditional surrender.”

Beqo’s portrayal of her experiences in America suggested that her immigration and readjustment were not all black and white, either.

Her charming imitation of the Southern accent and style, and her dance around the mannequins to reenact her wedding day, were contrasted against her frustration, during her work as a seamstress, with her client’s shallow obsession with fitting into the petite measurements of her mother’s wedding dress.

As Albania suffered the aftermath of the Cold War, civil war and ethnic cleansing, she encountered Americans who were oblivious to this violence and cared only for themselves.

This theme was highlighted in her eye-opening slam poem about watching her brother participate in Albanian protests “on live Albanian television.”

With horror, she watched as “another woman’s brother” got shot in the head.

Meanwhile, Americans could simply turn off the television and carry on with their lives.

She ended her poem with warning words to her brother: “We are not Egypt. No one is watching.”

In one of the final segments, Beqo revealed the significance of the play’s namesake, “Harabel,” which is the Albanian word for “sparrow.”

As a child, Beqo was “a sparrow flying over a minefield.”

Now, she has found happiness and become a talented poet and performer, which she believes was due to the grace of God.

Beqo’s performance was met with a standing ovation and enthusiastic reviews.

“I absolutely loved the performance!” College freshman Kritin Mehra said. “Probably one of the most powerful and captivating pieces of acting I’ve ever witnessed.”

“Her words were captivating and liberating all at once,” Kootin-Sanwu said.

Beqo’s passionate performance managed to weave a compelling story from fragments of two very different worlds, enthralling her audience and making for an unforgettable night. 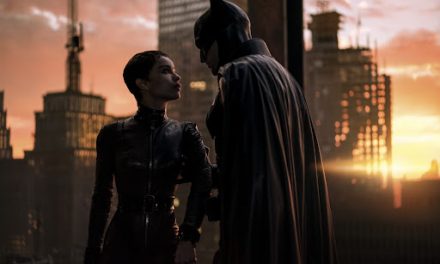 ‘The Batman’ is more of the same, for better and for worse

From Singing to the Silver Screen: Nick Jonas Talks ‘Jumanji’