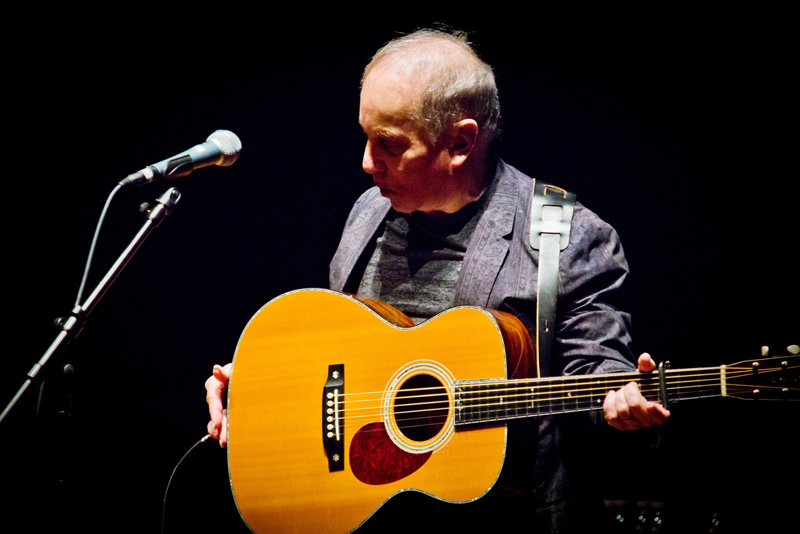 Musician and singer-songwriter Paul Simon performed an acoustic concert for a crowd of about 800 at the sold-out Emerson Concert Hall Tuesday evening.

The concert marked the fourth and final event of the 12th Richard Ellmann Lectures in Modern Literature – a biannual series established in honor of Richard Ellmann, who served as the first Robert W. Woodruff Professor at Emory from 1980 to 1987. The series has brought prominent writers such as Seamus Heaney, Salman Rushdie and Margaret Atwood to Emory in the past years.

Simon opened his hour-long performance with a somber acoustic version of “The Sound of Silence.” Mark Stewart, a Manhattan-based multi-instrumentalist who has written music for films such as “Across the Universe” and “The Tempest,” accompanied him on acoustic guitar. Stewart has been touring with Simon since 1998.

“I’ve had a lot of fun over the past few days,” Simon said to the audience following a cover of the George Harrison-composed 1969 hit “Here Comes the Sun,” which Simon called his favorite Beatles’ song. “I’m very grateful for what I learned in the process.”

Former U.S. Poet Laureate and co-lecturer Billy Collins joined Simon on the stage for a cover of the 1953 Junior Parker song “Mystery Train.” Collins played the tambourine, on which he has no formal training, and contributed background vocals.

Several musicians joined in the performance as the evening progressed, including Professor of English and Creative Writing and Director of the Ellmann Lectures Joseph Skibell on guitar and vocals; composer and Ellmann committee member Andy Teirstein on violin and harmonica; and Schwartz Center Events Manager Becky Herring contributing vocals.

Skibell said Simon’s manager asked if he would be interested in playing with Simon on stage just a few days before his arrival at Emory.

“You’re the devil,” Skibell responded jokingly to the manager.

According to Skibell, Simon planned the group’s performance of “Mrs. Robinson” and “The Boxer” in about 20 minutes during sound check.

“I thought it was a beautiful, gracious gesture – and an expression of Paul’s happiness with his time at Emory – that he welcomed us on stage,” he said.

Following the group performance of “The Boxer,” Simon cleared the stage to play “American Tune” before receiving an honorary gift from Skibell and departing the stage amid a standing ovation and pleas for an encore.

Tickets to the concert opened to the general community on Aug. 26 at 10 a.m., and were gone in 15 minutes, according to Herring. In addition, students were eligible to enter an online lottery for tickets several weeks in advance.

College junior Gus Cook attended the concert and commented that he felt like he was one of “15 to 20” Emory students in the audience.

“Many of my friends who entered the ticket lottery came up empty handed, and all other tickets were gone in less than an hour … [The concert] made students feel like uninvited guests,” Cook said.

College senior Hannah Power attended every lecture of the series.

“It was a rare experience to be able to listen to a musical artist speak about [his] work in such a candid way,” she said. “I feel very lucky and thankful to have been able to go to the lecture series, and it will definitely be one of my most cherished memories of my Emory career.

Alexandra Stern, a first-year graduate student at the Rollins School of Public Health, said she secured a ticket just 30 minutes before the show began.

“I was ecstatic when I got the chance to come,” she said. “[Simon] opening with ‘The Sound of Silence’ brought tears to my eyes.”

Simon, 71, still tours and records music but rarely performs for small audiences or at universities.

“[Simon] has never done anything like this before, and in all likelihood, he will never do something like this again,” Skibell said. “We were all very lucky to have witnessed it and been a part of it.

“We sometimes take for granted the resources we have at Emory, resources that allow us to do unheard-of things like this,” Skibell said. “I hope the energy this weekend has generated will remind us all of what we can do, what we can facilitate, when we come together as a community and put our resources behind the things – like art and song – that matter.”