‘Sierra Burgess is a Loser’ is Unoriginal, Flawed 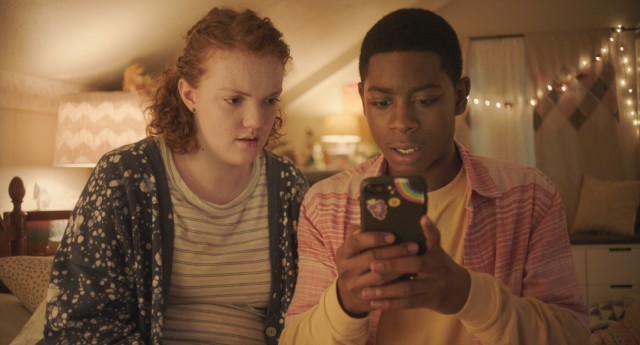 Mean cheerleaders, a sweet but oblivious quarterback and friendships shattered over silly misunderstandings: smells like typical high school drama. And as far as high school dramas go, Ian Samuels’ “Sierra Burgess is a Loser,” released on Netflix on Sept. 7, is certainly not the worst. However, the film is severely lacking in imagination and charm, two staples of high school romance films. The modern take on Edmond Rostand’s “Cyrano de Bergerac” proves predictable, sloppy and rather disturbing

“Sierra Burgess is a Loser” immediately strays from originality with its typical line-up of high school stereotypes: the geeky heroine, the handsome jock and the gorgeous cheerleader. The titular character, Sierra Burgess (Shannon Purser) is an unpopular girl with her heart set on attending Stanford University (Calif.). Ridiculed for her intellect, looks and love of all things literary, Sierra does not fit the traditional mold of teenage beauty. In a case of mistaken identity, high school quarterback Jamey (Noah Centineo) begins a text message correspondence with Sierra. Sierra and Jamey fall for one another amid evenings spent exchanging awkward flirtations and photos of zebras and elephants. However, there’s a problem: Jamey thinks he is texting popular cheerleader Veronica (Kristine Froseth), and Sierra is hesitant to tell Jamey otherwise.

The film’s premise is sweet, but falls woefully short in its attempt at originality. Even Purser, a fan favorite in “Stranger Things,” and Centineo, who skyrocketed to fame for his portrayal of Peter Kavinsky in Susan Johnson’s Netflix-released film, “To All the Boys I’ve Loved Before,” cannot save “Sierra Burgess” from ruin. The film parallels other high school movies — think “A Cinderella Story” or “A Walk to Remember,” where the popular male protagonist falls for the “wrong” girl. The only original aspect of this film is its nod to the current era of smartphones and texting. Every scene is more predictable than the next, from the discovery of Veronica’s rather disastrous home life (it’s no surprise, then, that she is so cruel towards Sierra) to the cessation of Sierra and Veronica’s friendship as a result of simple miscommunication. Jamey, meanwhile, is very much a Peter Kavinsky 2.0 — Centineo, it seems, has a knack for playing the sensitive jock with a heart of gold. However, whereas Peter Kavinsky’s love story was innocent and endearing, Jamey’s relationship with Sierra is a jumbled mess of lies and deceit.

There is also something profoundly disturbing about Sierra’s false interactions with Jamey — simply put, Sierra is deceiving Jamey and allowing him to believe she is someone else. This in and of itself is rather creepy. Sierra’s quirky-but-lovable best friend, Dan (RJ Cyler), puts it best: “There’s a word for that. Catfishing. I’m pretty sure it’s illegal.” And Dan’s words ring true. Sierra is supposed to be the hero, the gifted teenage protagonist deserving of romance, but “Sierra Burgess is a Loser” falls flat in conveying this. The only message the movie seems to send is that the only way to get a boy to notice you is to deceive him. Sure, Jamey does like Sierra eventually, as we discover right before the oh-so-cliche homecoming dance, but the convoluted plan Sierra devises in order to capture Jamey’s attention suggests that girls who don’t fit traditional standards of beauty (read: skinny) may find it a great deal harder to forge relationships than the pretty-and-popular Veronicas of the world.

So, while the bookish, unpopular female lead seems to be headed towards a satisfactory, predictable ending, she has to do some devious things in order to get there. When it comes down to it, Sierra’s moral’s are just as askew as Veronica’s. Her interactions with Jamey, which are creepy at best, do Sierra no favors. Sure, we want to root for the underdog, the “nice” girl, the “smart” girl, but do we want to root for the liar, the deceiver? If “Sierra Burgess is a Loser” is trying to prove that even unconventionally beautiful girls deserve love and happiness, it fails miserably by practically twisting Sierra into the antagonist. If Sierra, who is not conventionally beautiful, cannot have an honest, open relationship, what does this say for viewers facing similar body struggles?

There is one thing “Sierra Burgess is a Loser” does right: Sierra could have grown out her hair and worn it stick-straight, put on a bit more makeup and lost some weight, transforming herself from ugly duckling into Disney princess in a two-hour time slot. However, Sierra does not do any of these things: she remains herself throughout the movie, only growing more comfortable in her own body. Perhaps, then, a person need not change themselves in order to be accepted or liked by others — a rather refreshing sentiment in an otherwise cringeworthy love story.

The plot may be unimaginative, the protagonist less-than-heroic and the message rather misguided in its execution, but it is nice to see that “Sierra Burgess is a Loser” celebrates women of all shapes and sizes. Sierra Burgess, for all her anti-heroic qualities and less-than-truthful interactions with Jamey, is a great example of the differences between human bodies and how we can learn to be comfortable with the skin we’re in. We do not ordinarily picture the high school jock with the nerdy, unpopular girl, yet this movie pushes these two characters together without damaging Sierra’s spirit. Sierra remains thoughtful, intelligent and funny throughout the movie; the confidence she gains in herself and about her body is admirable. Purser’s character is a tribute to the importance of diversity in casting and pushes us one step closer to acceptance of those around us and ourselves; it is for this reason that “Sierra Burgess is a Loser” may be worth the watch after all.