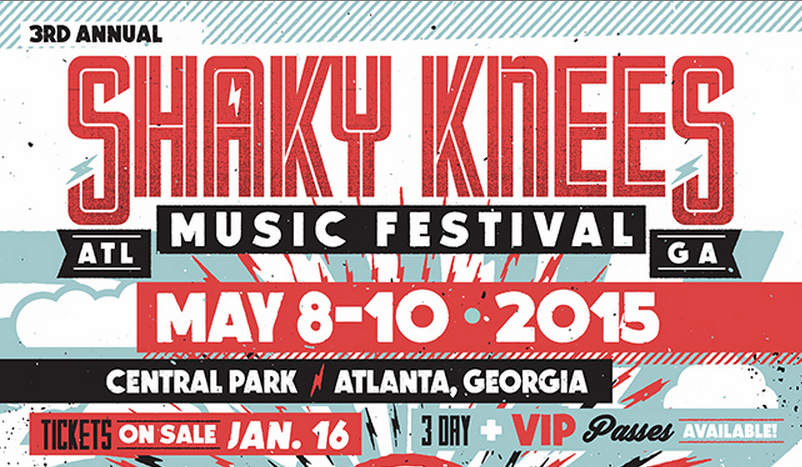 There’s a music festival coming to Atlanta next month that will actually focus on music. Founder of alternative rock Shaky Knees Festival Tim Sweetwood said in an interview with the Consequence of Sound blog that the festival, which will take place in Central Park in Old Fourth Ward May 8-10, will include food trucks, vendors and bars to make the experience enjoyable, but the heart of the festival will be its music.

Sweetwood, who also put together the Atlanta country music festival Shaky Boots for May 16-17, has lined up a serious schedule of performers including The Strokes, Wilco, Pixies, Tame Impala, Ryan Adams, Nuetral Milk Hotel, Interpol, TV on the Radio, Noel Gallagher’s High Flying Birds and The Avett Brothers. Smaller names like Flogging Molly, The Mountain Goats, Social Distortion, Kaiser Chiefs, Milky Chance and Best Coast will also place the festival in its own cultural category, providing Atlanta with a non-electronic, no frills, high-energy celebration of music with real instruments.

The festival, which is now in its third year, arose out of Sweetwood’s personal desire to bridge a gap in Atlanta’s music scene. For years now, EDM festivals like CounterPoint Music and Arts Festival and TomorrowWorld have taken over the city and generated millions of dollars; the latter grossed as much money for Atlanta as the NCAA Final Four Championships in 2013. Local rock and indie music fans have had less of an opportunity to sit down, sprawl out and take in good music for three days, but Shaky Knees will remedy the situation for those willing to pay the $215 price tag for the weekend.

The festival was held at Masquerade Music Park its first two years, a venue conducive to the intimate kind of concert experience due to its size, but the event will now have room to spread out, borrowing a similar vibe from big league festivals Coachella and Bonnaroo. Sweetwood is pumping up the fest’s size, but is still ensuring that it’s both navigable and intimate like it had been its first two years.

Over its three days, Shaky Knees will feature over 80 artists on five different stages, requiring a bit of strategy in order to maximize the concert experience. The festival’s website includes a printable day-by-day schedule with performance times and stage locations that begs to be cut out, highlighted and stored in one’s back pocket. It’s a visual way to make sure you’re moving at the right times and that your preferred performances don’t conflict. The boldest way to approach the weekend is to pick a stage each day and stay there. Artists will come and go and will leave you with completely new playlist material.

Just make sure you see The Strokes. The band, which will continue on to Big Guava Festival in Tampa and then on to Europe, is only playing festivals right now, so festival-goers at Shaky Knees will be in the right place at the right time. The band’s frontman Julian Casablancas has most recently worked on his own project Julian Casablancas + The Voidz, producing the album Tyranny in 2014, but will play at Shaky Knees with his original crew. The hype surrounding The Strokes is well deserved. Casablancas’ voice paired with the band’s distinct guitar riffs make for alt-rock masterpieces that they somehow produce reliably, again and again. The band’s performance Friday night will set the tone for the rest of the festival.

Interpol is currently touring, and will play on Piedmont Stage Saturday night just before Noel Gallagher’s High Flying Birds. The band shares the same kind of melancholy, alternative sound of Joy Division, but with tracks that are newer and fresher and keep up with similar artists in the current alt-rock realm. The NYC-based band’s album El Pintor (2014) made Rolling Stone’s 50 Best Albums of 2014 and confirmed that Interpol can hold its own.

It’s worth staying at Shaky Knees on Sunday just to see Tame Impala, who will close out the entire festival. The Australian band, which only floated to the top of the music scene in 2010 with its debut album Innerspeaker, channels The Beatles and The Jimi Hendrix Experience and MGMT all in one, and produces psychedelic, underwater-feeling tracks that are still danceable.

It was an unexpected move to anchor the festival with new guys Tame Impala rather than the veteran Strokes, but it will set a precedent for other music festivals and communicate that it’s not big names that matter, but the music they are making. 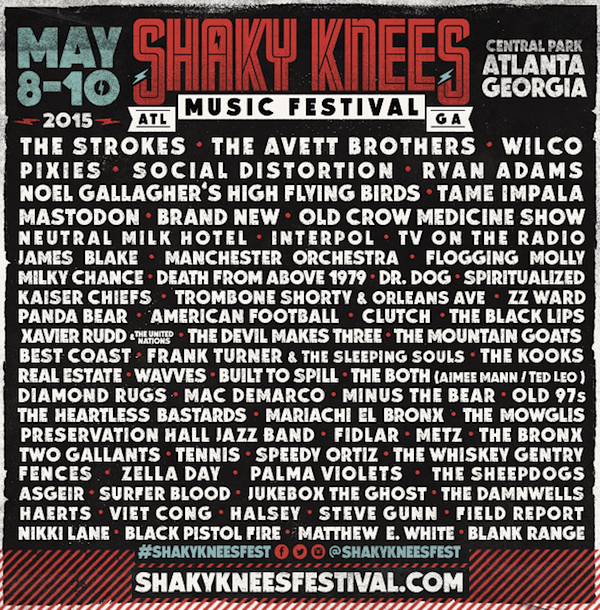 General admission and VIP tickets for the three-day festival are still on sale on the festival’s website, and can be purchased on Ticketmaster.