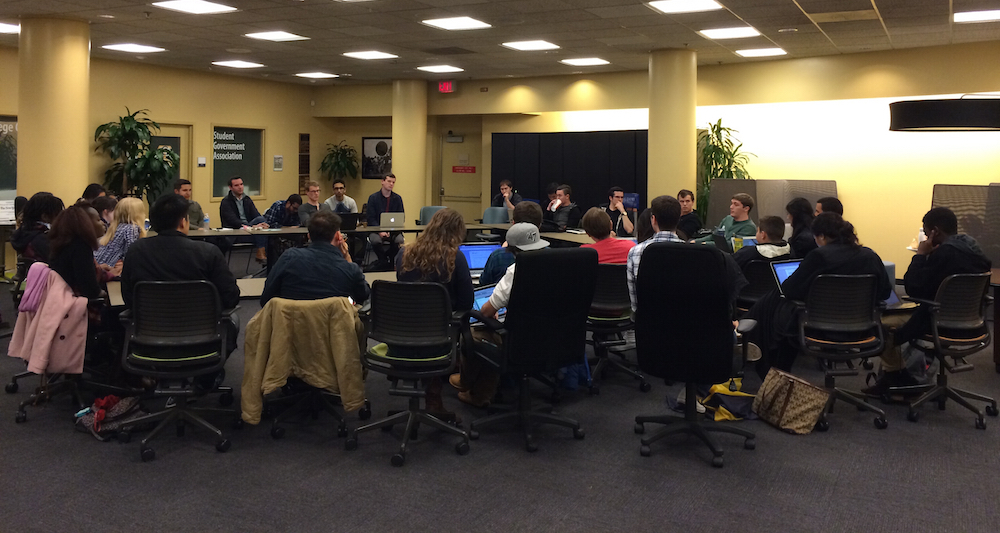 The 48th Legislature of the Student Government Association (SGA) convened on Monday evening for its last legislative session before the newly elected legislators take over and passed two bills to approve funding for a gender-neutral bathroom and to alter its attendance policy.

The original version of the bill proposed that all representatives have a maximum of four absences per legislative term, after which their status with SGA be at the discretion of the speaker.

Representatives who are absent from a meeting are expected to find suitable replacements to take their spots so that SGA can reach quorum.

“The idea behind this bill is to take a stab at solving the attendance problems that we’ve had all of this session,” Tucek said. “Very consistently, we’ve had to use proxies just to meet quorum, and this has been a big problem for the Legislature. This bill … seeks to take very drastic action.”

SGA members engaged in a lengthy debate over the bill. Some questioned whether it was necessary, and others wondered whether it would be effective.

“We just have to be logical about [attendance] … and having someone keeping track of it,” Goizueta Business School junior and SGA Junior Representative Luke Bucshon​ said. “I don’t think it’s something that we necessarily have to enforce harder.”

Several SGA members from graduate school divisions expressed concerns about the use of proxies, which is common throughout SGA but especially prevalent among graduate student representatives.

SGA responded by amending the bill to say that the Speaker of the Legislature would have very broad discretion to excuse members from meetings, so that as long as members made reasonable efforts to fulfill their responsibilities, they would not be subject to penalties. The amendment also gave the speaker the final say on whether or not to expel members.

Furthermore, SGA included in the amendment that the speaker must email members who have accrued three or four absences to remind them of the attendance policy. Expelled members will have the opportunity to appeal their removal during the next meeting of the Legislature.

The amendment passed by a unanimous vote, and the bill passed as well by a vote of 16-3-2.

“The reason I wrote this bill is to demonstrate to the student body that this is a cause that SGA cares about,” Darby said. He added that SGA also pushed the amendment “to sort of shame the University because this type of project is something the University as a whole should fund, but they’ve been unwilling to put up money.”

The bill proposed that SGA allocate $10,000 to the project, which in total will cost over $100,000 and will be paid for by the WoodPEC. Darby referenced the approval in a University-wide referendum of a recent SGA amendment to remove gender-binary enforcing language from the SGA constitution, and he said that this event showed the widespread support among students for gender inclusion.

Darby submitted the SGA gender inclusion amendment, which eliminated all instances of pronouns, such as “he” or “she,” that impose a gender binary. SGA passed the amendment by a two-thirds vote and 65 percent of the student body.

According to Darby, the restroom will be on the first floor of the WoodPEC, and it will include a shower and a changing bench.

“If students believe that this is an important cause and are willing to put up their money for it, then the University should do it too,” Darby said. “Our contribution is more than symbolic. We’re investing in inclusion.”

SGA members overwhelmingly supported the bill, although many of them questioned why $10,000 was needed to show that SGA was in favor of the move.

“By putting this money in, I don’t think we’re making an impact on the construction itself,” Vice President for Finance and College senior Patrick O’Leary said. “We could make this symbolic gesture with a smaller amount of money.”

In response to O’Leary’s comment, SGA amended the bill to reflect the majority of SGA members’ desire to change the contribution amount from $10,000 to $5,000.

SGA passed both the amendment and the bill.