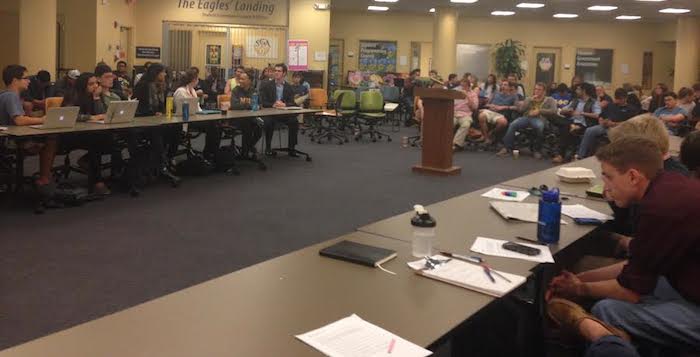 The 48th Legislature of the Student Government Association (SGA) passed three bills on Monday evening, including a measure that would internalize the Student Programming Council (SPC) Vice Presidential election.

This bill will need to be passed again next week in order to become official.

“The reason we want to internalize the election is twofold,” Nathin said. “The stress [the election] induces on our candidates is immense… when it comes down to a popularity contest through the University, it’s a little difficult for some of our candidates to swallow when they lose. Also, the Vice President’s roles are strictly internal … so we think it would be best for the SPC, who know the dynamics of our internal functions and relationships, to actually vote for our Vice President.”

Nathin emphasized that the amendment would not change the electoral process for the SPC president.

He acknowledged that it was proper for the SPC president to be chosen via a University-wide election, since the SPC makes use of the student body’s money. However, he maintained that this reasoning did not apply to the Vice President, whose functions are internal and who exercises no direct control over SPC spending.

According to Nathin, SPC voted 39-1-0 in favor of the change. However, the Governance Committee voted unanimously against the bill.

“We [thought] it was an undemocratic move,” SGA Senior Representative, Governance Committee Chairman and College senior Josh Wentzel explained. “We felt it was not good to take electoral power away from students.”

College senior and SGA College-wide Representative Aaron Tucek pointed out that the bill was in violation of the SPC Constitution and the Emory Elections Code, which said that the SPC Vice President would serve as SPC President in the actual President’s absence.

In response to this observation, Elections Board Chair and College junior Reuben Lack suggested an amendment stating that in the event of a vacancy in the office of SPC President, a new University-wide election would be held, and the Vice President would only serve as interim president until the election took place. Lack’s amendment passed.

Graduate Student Government Association President (GSGA) and second year MBA student in the Goizueta Business School Ely Goldberg proposed another amendment to the bill in which the social chairs of each graduate division would serve as ex-officio members of SPC. This amendment passed as well.

When it came time to vote on the bill itself, SGA, which was missing a number of members during the meeting and needed a majority of quorum to pass the bill, failed to pass it by a vote of 10-8-3.

At this point, the SPC members present left the meeting.

However, later on, SGA passed a motion to reconsider the bill and voted by unanimous consent to review it for a second time.

This time around, the bill narrowly passed by a vote of 11-7-2. In order for the bill to take effect, it will need to be passed again at next week’s meeting.

Bill 48SL13, submitted by Goldberg and SGA President and College junior Jon Darby, proposed that the Finance Committee, in association with the Governance Committee, review the current percent-distribution of the SGA Student Activities Fee (SAF) fee split in order to determine if changes are required. The SAF will be changed to $92 as the result of a scheduled Cost of Living Adjustment (CoLA).

As part of this bill, every division would receive an absolute increase in funding, while the GSGA would receive a greater percentage of the fee split, and other University-wide organizations would also receive increases in funding.

“Everyone gets more money.” Darby said. “The fee split sets aside around $47,000 for Student Organization Collaboration technologies … it increases the budget of this body by 10 times, and it accounts for new University-wide organizations. We think it’s a responsible way to move forward.”

Vice President for Finance and College senior Patrick O’Leary explained that the Committee believed that GSGA should not receive an increase in funds and should instead use its own funds “more judiciously,” since “many graduate students aren’t very familiar with the functions of GSGA.”

Goldberg responded that GSGA needs more money because it currently only has sufficient funds to hold one event a year.

Tucek offered an amendment to the bill so that SGA would assign a committee to review the current fee split prior to making any alterations. SGA passed this amendment, and the bill then passed by unanimous consent.

The final bill of the evening, submitted by Lack, proposed that candidates should not be automatically disqualified for failing to turn in their campaign expenditure receipts on time.

Instead, those who turned in their receipts would face sanctions from the Elections Board.

The Governance Committee voted in favor of the bill, and SGA passed it by an 11-4-6 vote.