The 50th Legislature of the Student Government Association (SGA) convened Monday and discussed two separate proposals for legislative changes to address graduate student concerns in SGA. One proposal would change the structure of SGA, and the other would change SGA’s policies.

The two proposals outlined solutions to the lack of a representative graduate student voice in SGA. Presenters of both proposals encouraged legislators to consider the plans as starting points for discussion and drafting of compromise bills.

Graduate Student Government Association (GSGA) President and Goizueta Business School graduate student Jared Greenbaum proposed splitting GSGA from SGA and establishing it as an autonomous body that would oversee issues affecting any or all graduate students, including  the amount and distribution of the Graduate Student Activity Fee funds  A Graduate Programming Council (GPC) would be established, receive funding from GSGA and work with Student Programming Council (SPC). University-wide issues will be heard by both bodies independently, and decided upon by a majority approval from both bodies. Additionally an eight-seat joint governing committee would oversee any University-wide organizations or initiatives. The proposed joint committee would consist of a president, executive vice president, divisional treasurer and a legislative representative from SGA and GSGA.

“This restructuring will create two distinct and equal voices that can represent the very different needs of undergraduates and graduate students,” Greenbaum said.

Alternatively, SGA President and College senior Max Zoberman and SGA Executive Vice President and Business School junior Gurbani Singh proposed a series of changes, including SPC refunding half of the $89,090 graduate contribution to SPC this year, which would amount to 10.24 percent, or $44,545, of SPC’s total operating budget this year. Zoberman and Singh’s proposal would also allow both undergraduate and graduate legislators to vote to reduce or increase the proportion of funding from their respective division if they believe the legislation is not representative of that division’s financial contribution. The proposal would also establish an Undergraduate SGA (USGA), which would coordinate the four undergraduate divisions.

“If [Greenbaum’s proposed] restructuring goes through, we start competing for resources from the administration, and the job of student advocacy will become much more difficult,” Zoberman said. “We will start competing against one another within our own student community.”

Discussion of the proposals, both of which entail constitutional amendments, will continue in the next legislative session Monday. If legislators draft and propose a bill entailing a constitutional amendment, it will be called to vote within SGA. If the bill is passed by majority vote in SGA, it will proceed to referendum, or general vote, by the student body.

Emory School of Law students Victoria Bartlett and Allen Kowalczyk, College junior Tiffany Ahn and College freshman Owen Mattocks were confirmed and sworn in as members of SGA’s Constitutional Council. The Constitutional Council, the supreme council of SGA’s three judicial bodies gives members the authority to hear and decide, based on SGA’s constitution, questions about the constitutionality of any University action that affects the rights of students or student groups. 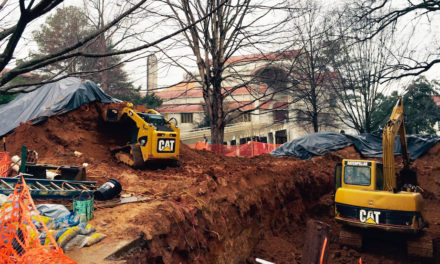 Early Decision I Applications Grow by 8%