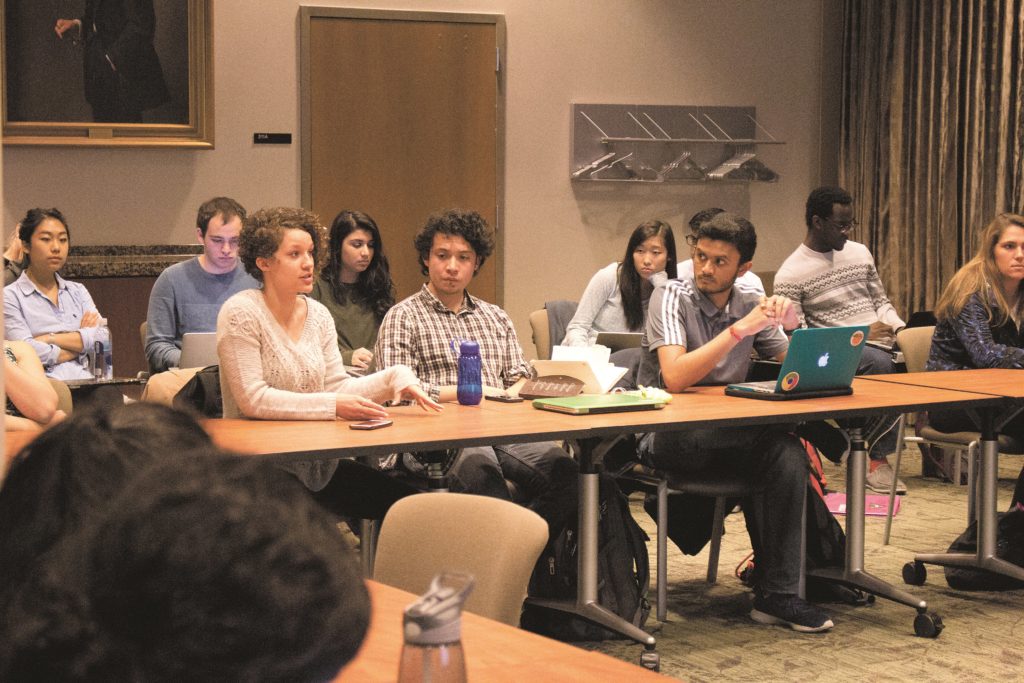 In the aftermath of the Student Government Association (SGA) split, several top SGA officials have issued conflicting interpretations of the state of its constitution both in SGA meetings and interviews with the Wheel.

Constitutional Council Chief Justice and Emory School of Law student Alex Cohen told the SGA legislature in a Feb. 6 meeting that the Jan. 31 referendum passage allowed the legislators to do anything necessary to restructure the student government.

“When you had [the] University referendum … you guys derived the power to do whatever substantive rule-changing [necessary] to get the new student government up and running as long as you guys can agree or disagree to suspend the rules and mess with the little procedural things you guys have problems with,” Cohen said in the meeting.

Cohen clarified in a Feb. 27 interview with the Wheel that his statement to the legislature was “advice on leadership” based on his experience serving in previous student governments rather than “legal advice” as chief justice.

“What I said at the meeting is not binding in any way,” Cohen said. “I was giving guidance because students were concerned about following the rules of the legislature.”

SGA Attorney General and Goizueta Business School senior Christopher Lam said that Cohen’s stance on the state of the Constitution is also not binding.

Cohen said in a Feb. 27 interview with the Wheel that some parts of the SGA Constitution are “probably active,” but he cannot issue an official ruling until a case is brought and all details are presented to the Constitutional Council.

Lam, who was sworn in as attorney general at the beginning of this semester, said in a Feb. 27 interview with the Wheel that there is a “disconnect between what’s written [in the Constitution] and what’s practiced” in SGA.

Lam said that SGA was attempting to be efficient because “the pressing matter is that we want to make sure the next SGA has a working structure in place.”

In contradiction to Lam’s interpretation of the Constitution, SGA College-wide Representative and College junior Will Palmer said in a Feb. 27 interview with the Wheel that “97 percent” of the old Constitution has been followed. He added that he had been aware before the referendum that the Constitution would be void following the split bill’s passage because the legislature would be unable to reach quorum after the dismissal of its graduate representatives.

No temporary Constitution was put into place because it would have been too much effort for legislators to write a Constitution that would be amended again, Palmer said.

Palmer said that the legislature has been following the Constitution with the exception of provisions regarding graduate legislators.

However, SGA President and College senior Max Zoberman said in a Feb. 27 interview with the Wheel that SGA is currently operating without a standing Constitution. He told the Wheel the SGA legislature could take any action necessary to fulfill the split bill’s directive to create a new undergraduate legislature.

Following Cohen’s Feb. 6 interpretation, Zoberman told the Wheel Feb. 27 that “the legislature … informally decided to continue to govern ourselves according to at least the procedural rules of the Constitution.”

Under that “informal resolution,” “within reason, we would continue to abide by the provisions of the old Constitution so long as it doesn’t inhibit us from passing this Constitution in a timely manner,” Zoberman said.

Legislators agreed on the informal resolution after Cohen told the legislature that he interpreted the Constitution as void, Zoberman said.

“It was a vote … it was a unanimous decision,” he said.

Nothing binds SGA to that informal decision, Zoberman said.

In contradiction to Zoberman’s claim that SGA had informally agreed to generally follow the Constitution, Executive Vice President and Goizueta Business School junior Gurbani Singh said yesterday that SGA did not pass a formal nor an informal bill stating that SGA would adhere to its Constitution as closely as possible.

“It was an accepted understanding that we would try our best, but you can’t follow everything,” said Singh, who said she has attended all SGA meetings this semester.

SGA freshman representative Miguel Vivar-Alcade, who said he has attended all SGA meetings this semester except the Feb. 27 meeting, said that he does not recall any informal agreement to follow the SGA Constitution.

In contradiction to his Feb. 27 claims, Zoberman said yesterday that the decision to adhere to the Constitution as much as possible had been a “joint determination made by the legislature and the executive branch.” The determination stated that SGA would adhere to the SGA Constitution as much as possible barring any provisions preventing the legislature from fulfilling the directives issued by the split bill, Zoberman added.

Zoberman said that concern regarding the status of the SGA Constitution had been raised by the executive board both during and after the Feb. 6 meeting. He said that the legislature discussed how SGA ought to follow its Constitution in that session.

Following Cohen’s Feb. 6 statements, Zoberman told legislators that Cohen had provided SGA with “a little bit more flexibility in terms of the timeline” of the legislature restructure, but an audio recording of the meeting shows no evidence of the legislature discussing the Constitution.

Under the SGA Constitution, amendments are “Issues of Significance,” and require SGA to properly notify the student body of SGA’s consideration of them.

The Wheel found that SGA failed to hold a public forum to publicize the split bill per its “Issues of Significance” clause before it passed the bill through the legislature Nov. 21. SGA restarted its voting procedure because had it breached its Constitution and held a Nov. 28 public forum.

According to the SGA Constitution, that public forum must be “accessible to those not physically present, whether by live-broadcast on the internet, conference call or similar means that allows real-time participation in the forum without being physically present.”

When the Wheel asked Zoberman whether the public forum had been live-streamed or broadcast, he said it had not.

Zoberman said that the real-time participation provision “has never happened in the history of Emory student government.”

He said that SGA attempted to account for that provision by creating an email account which he and Vice President of Communications and Goizueta Business School senior Ben Baranov monitored daily for students to send questions.

The email address was included in a Dec. 9 email sent to the student body by the 50th Student Government Association informing students that the bill had passed through the legislature Nov. 28 and that a University-wide referendum would be held in January.

According to the SGA Constitution, a bill to amend the Constitution requires two-thirds of the legislature to vote in favor. In its Monday night meeting, SGA voted to pass the undergraduate legislature restructure amendment 14-1-0.

Lam pointed out that two-thirds of the undergraduate legislature would be 16 legislators, not 15, and that if SGA were following the Constitution as closely as possible under the informal resolution, that vote would be invalid.

“I’ll leave that [decision] to you guys,” Lam said to the legislature.

The Ranking Member of the Legislature and College senior Crystal McBrown presided since the speaker of the legislature was absent. She asked SGA if they wanted to table to the bill as a result of Lam’s comments, to which several legislators chorused “No.”

Singh said that SGA has been voting since the split using a simple majority to pass bills and that the passage of this bill was valid on that basis.

“In the past few weeks we’ve been passing things by simple majority — ever since the referendum passed and the split happened,” she said.

The bill to restructure the undergraduate student legislature passed through SGA Monday night, and it is scheduled to go to referendum March 13.