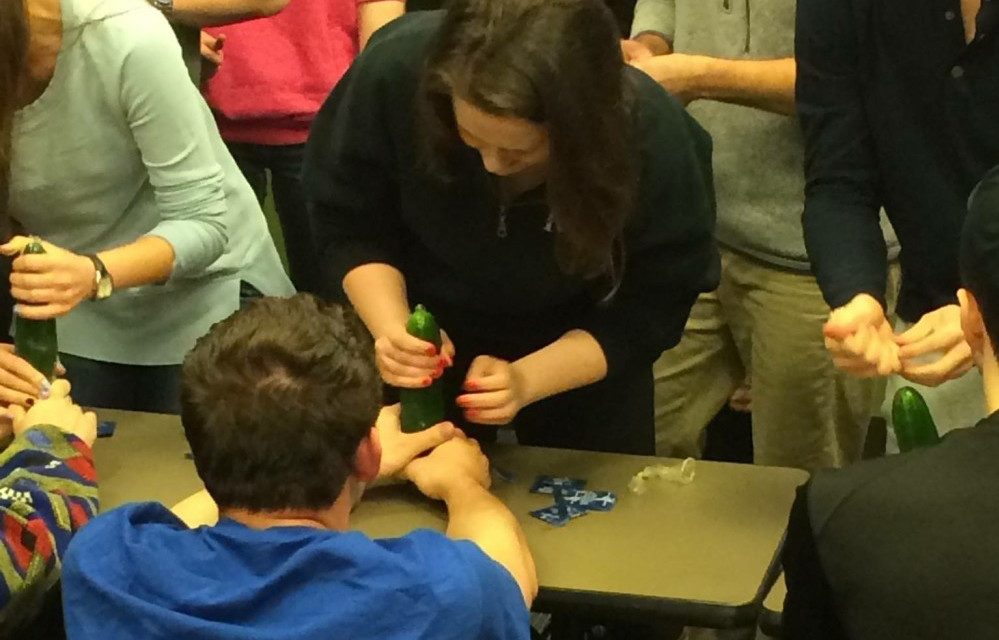 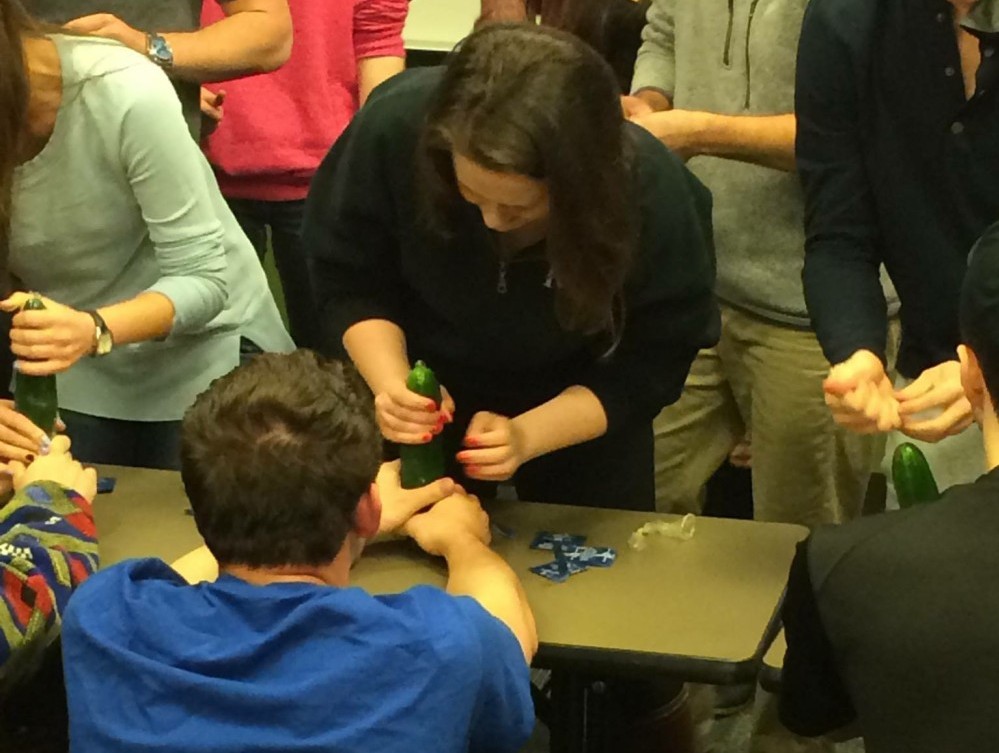 College junior Hannah Grosman places a condom on a zucchini as a part of the Greek Games, a sex-positive-themed relay race aimed at engaging the Greek community in dialogue about safer sex. Greek Games helped to kick off the second annual Sex Week, sponsored by Sexual Health Advocacy Group and the Office of Health Promotion, which promotes sexual health on campus. | Bella O’Neill, Contributor

The second annual Sex Week at Emory, the love child of the Sexual Health Advocacy Group (SHAG) and the Office of Health Promotion, is at it again, educating students across campus about safe sex through a variety of fun and interesting events, and it is making orgasmic waves in the process.

“Sex Week is a week dedicated to spreading sex positivity and providing sexual health education to the entire Emory community,” Casey Costello, SHAG vice president and College junior wrote in an email to the Wheel.

“We want to reduce the stigma attached to talking about sex and sexuality, while continuing to further the Emory community’s knowledge about sexual health.”

The week of events began Monday with “Sexonomics,” a discussion by Andrew Francis and a round of Greek Games that focused on getting members of the Greek community involved in a discourse about safer sex.

These events kicked off the week with success, as a team comprised of members from Alpha Delta Pi sorority and Phi Beta Sigma fraternity won the put-the-condom-on-the-zucchini relay race Monday evening.

Sex Week continued Tuesday with the “Sex and Culture Panel,” which “featured students and professionals speaking about the intersections of sex and different cultures,” according to Costello. This was a new event to the Sex Week schedule, adding a pertinent subject to the sexual health discussion on campus.

The other events included the “What is (Safer) Sex?” discussion, a safer sex demonstration, “Sex Trivia” and Clinical Sexologist Megan Andelloux as the headline speaker.

All week, each event opened up the conversation about safer sex.

“[Sex Week] has the potential to change how sex is talked about,” Hannah Grosman, who attended the event on Monday, wrote in an email to the Wheel. “It won’t happen in one one-hour long discussion, but I do know that nothing will happen if we don’t talk about it at all.”

Before they began Sex Week, SHAG felt that the opportunities to talk about sex, sexual health and sexuality in a safe environment were severely limited. Freshman health does not include a segment on sex education and sexual health, so students do not have a mandatory academic outlet in which to discuss sexual health.

SHAG’s main goal is for “Sex Week to be a fun, informative and interesting experience for all those who participate in our events,” Costello wrote.

“We hope to provide education that is extremely important to the health of the community, as even at a school like Emory, many people lack comprehensive sexual health education,” Costello wrote.

Grosman said she is already feeling the changes SHAG is hoping to make.

“Of course I do not believe that learning how to put a condom on [a] cucumber will solve all of our problems, but these discussions are a start,” she wrote.

Empowering students to make safer sex choices is a significant part of what Sex Week, and the organization as a whole, is aiming to do, according to Costello. Additionally, SHAG hopes to disrupt the stigmas in this area and make sexual health a positive and necessary topic of conversation.

SHAG has recognized that expecting young adults to conduct themselves responsibly in the realm of sexual health without ever giving them an outlet to ask questions and discuss this topic is an outdated and problematic philosophy.

“Ultimately, we want to be a part of a campus that understands and appreciates the need to learn about sexual health, and to be active in creating a healthy atmosphere for sexual expression,” Costello wrote.