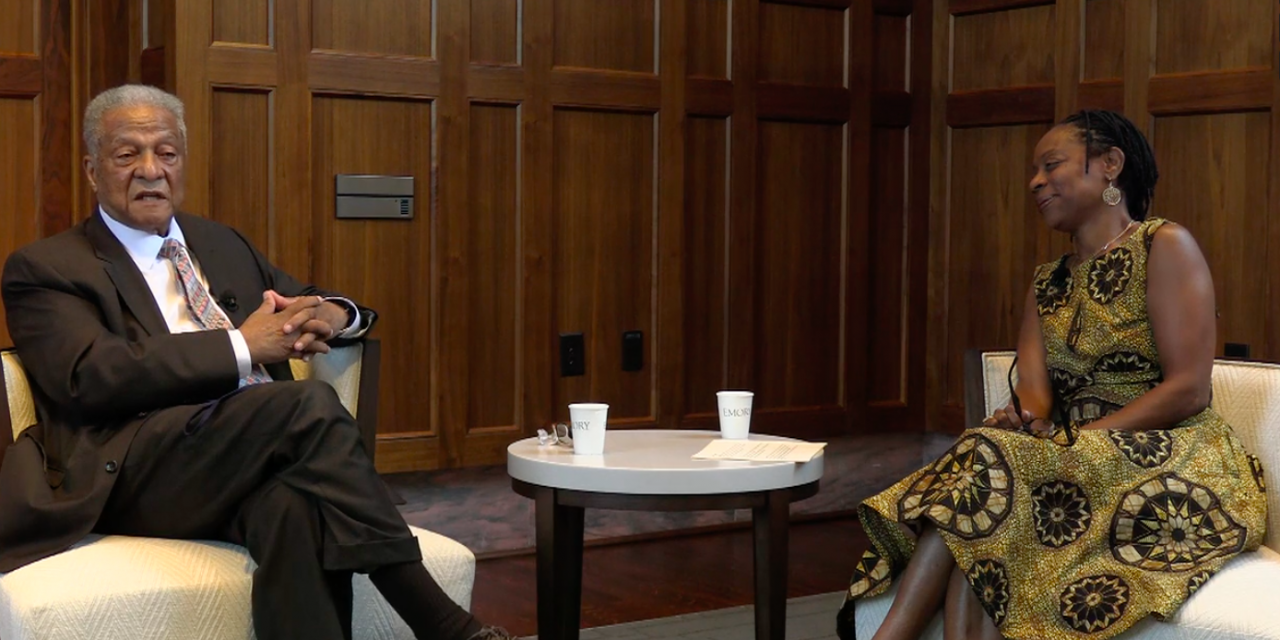 In 1959, Dr. Marion G. Hood received a letter denying him consideration for admission from the Emory School of Medicine because he is Black. The school hosted a conversation with Hood in Convocation Hall June 17 to apologize for the school’s discrimination against Hood and other Black applicants who were denied a chance of admission during this time nearly 61 years after he received that letter.

Current dean Vikas P. Sukhatme delivered the apology on behalf of the School of Medicine. The school accepted its first Black student, Hamilton Holmes, in 1963.

“I apologize for the letter you received in 1959, in which you were denied consideration for admission due to your race,” Sukhatme said. “We are deeply sorry this happened, and regret that it took us more than 60 years to offer you our sincere apologies.” 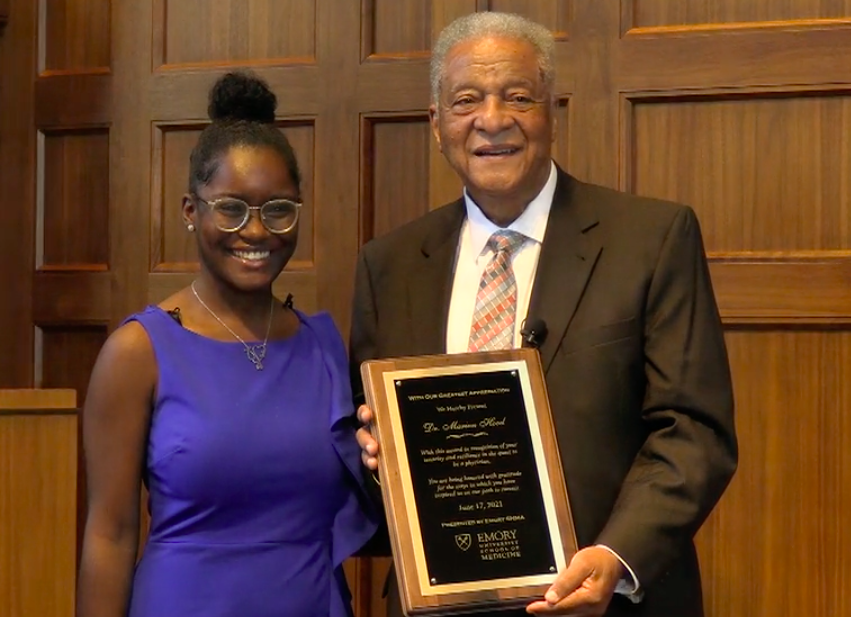 Dr. Marion Hood received a plaque from President of the Student National Medical Association Sydni Williams in “recognition of his tenacity and resilience in the quest to be a physician”. (Sarah Davis)

Additionally, Hood received a plaque in “recognition of his tenacity and resilience in the quest to be a physician” from the President of the Student National Medical Association Sydni Williams. The group is a non-profit organization focused on supporting underrepresented minority medical students across the United States.

Prior to the conversation, University President Gregory Fenves recognized Hood, as well as the upcoming official holiday of Juneteenth National Independence Day on June 19. Juneteenth marks the day that news reached Galveston, Texas that the Civil War had ended and slaves were free.

“As we approach this weekend celebration of Juneteenth, his story unfolds during a time when our nation was engaged in a struggle for positive and for lasting change in the civil rights movement: a chorus of voices that rose up against centuries of anti-Black racism and profound injustice in this country, and Emory University was part of the problem,” Fenves said.

Hood’s story gained traction on social media in 2018 and then again in 2021 after a photo of the letter was posted online in which the director of admissions at the time, Lewis L. Clegg (25C, 31G), wrote, “I am sorry I must inform you that we are not authorized to consider for admission a member of the Negro race.”

“I did not expect to get into Emory,” Hood said. “I did not expect the letter to be on the internet. If you go to my house, that letter is framed in my basement where only my friends go. It’s not in the front of my house anywhere where anybody coming can see the letter.” 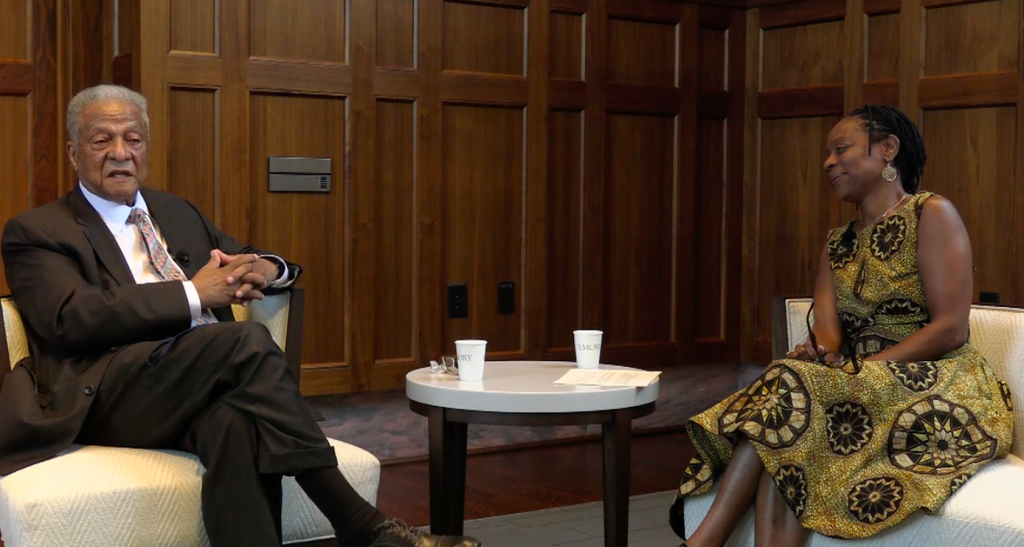 Dr. Marion Hood, who was denied consideration for the Emory School of Medicine in 1959 sat down with Dr. Sheryl Heron, the medical school’s associate dean for Community Engagement, Equity and Inclusion, on June 17. (Sarah Davis)

Originally from Griffin, Georgia, the 83-year-old currently works part time at a clinic in Warm Springs, Georgia that treats patients regardless of their ability to pay. He said that his decision to become a doctor was influenced by an experience he had as a young boy accompanying his mother to the doctor’s office.

“We had to enter through the back door of the building, and we went into a small room with no furniture that had Coca-Cola crates there for you to sit on,” Hood said. “We sat there and had to wait until the last person was seen, and then the doctor came in and took care of my mother. I was fuming. I couldn’t see why we had to wait so long just to be seen, and I said to myself that if I was a physician, my mother and my kind would not have to go into the back.”

After high school, Hood followed his brother to Clark Atlanta University (Ga.) where he decided to apply to medical schools, including Emory. Hood said he wanted to apply to Emory after Clark gave an Emory professor an honorary degree.

After receiving the letter from Emory, as well as rejections from several other medical schools, Hood took one “last shot” at medical school. He applied to Loyola University Chicago Stritch School of Medicine (Ill.) where he graduated and became a practicing OB-GYN.

Following his conversation with Heron, Meltzer asked Hood questions from the audience on the webinar. One question about how Hood forgave those who discriminated against him prompted Hood to tell a story that brought tears to his eyes. He recounted a story for the audience about a time when he was working in an emergency room and a patient spit in his face. When he kept giving medical attention to the patient, the man became confused and asked him why he continued to care for him after he insulted him.

“I said to him, ‘I was a doctor. I wanted to take care of people and sometimes you have to take care of people that you don’t really like, that you don’t really want,” Hood said. “I say to people: You can’t be disrespectful, you have to always respect the patient, you always respect the person, you always expect the good from that person. And, if you do that, everything else will work its way out. There’s no reason for me to dwell on Emory not giving me a letter.”