Emory’s basketball, swimming and diving, and track and field teams competed in the first matchups of the semester over the past week. Both the men’s and women’s basketball teams traveled to New York University (NYU) and Brandeis University (Mass.) where the men won one game and the women were victorious in both. The swimming and diving team won their meet, but the track and field team failed to place in the top three in both men and women.

The Emory women’s basketball team extended their winning streak to seven games after picking up wins at NYU and Brandeis. The Eagles played the NYU Violets on Jan. 17. The teams played evenly throughout the match and with about five minutes left to play in the fourth quarter, the teams were tied at 59-59. The Eagles played top-notch defense for the remainder of the game, forcing NYU to miss their final seven shots. Emory went on a 15-0 run to close out the game led by senior guard Allison Chernow, who scored 12 of her 15 points in the fourth quarter. Sophomore forward Tori Huggins posted a 14 point, 11 rebound double-double in addition to senior forward Erin Lindahl scoring 20 points. NYU freshman forward Jenny Walker added 21 points for the Violets in a 74-59 loss.

On Jan. 19, the Eagles traveled to face the Brandeis Judges. The Eagles found themselves down three points entering the fourth quarter, but that quickly changed after the team went on a 10-0 run in the middle of the quarter. Chernow posted 13 of her 20 points in the fourth quarter to lead the Eagles to a 75-67 win. Huggins and junior center Blair Ripley each scored 12 points and Judges’ senior forward Hannah Nicholson recorded an 18 point, 11 rebound double-double. Emory is now 12-2 overall and tied with Case Western Reserve University (Ohio) atop of the University Athletic Association (UAA) standings at 3-0. The Eagles next play against Carnegie Mellon University (Pa.) at home on Jan. 24.

The Emory men’s basketball team split their two games this past weekend during their trip to the Northeast. Emory defeated NYU 83-69, shooting 52.5 percent from the floor. Emory led by five points at halftime, but the Violets tied the game in the middle of the second half. Emory responded by going on a 19-2 run that peaked at a 19-point lead. Junior guard Romin Williams scored a game-high 25 points and shot 5-10 from three-point range. The bench provided a lot of support, as three Eagles finished with at least nine points. Senior forward and guard Jimmy Martinelli grabbed eight rebounds and scored 21 points for NYU in a losing effort.

Sunday’s game against Brandeis ended in a 75-73 loss. The teams were neck-and-neck all game, and no team led by double digits at any point. Williams tied the game up with two free throws with 22 seconds remaining. During Brandeis’ final possession, junior guard Matthew Schner blocked a shot, but Judges’ senior forward and guard Eric D’Aguanno grabbed the offensive rebound making a jump shot with eight-tenths of a second remaining in the game. Junior forward Lawrence Rowley and Schner each finished with 19 points and nine rebounds for the Eagles. Brandeis’ sophomore forward Nolan Hagerty had a 21 point, 14 rebound double-double in his team’s victory. The No. 3 nationally-ranked Eagles are now 12-2 overall and 2-1 in UAA conference play. The Eagles return to the floor on Jan. 24 when they host Carnegie Mellon University.

The next meet for the men’s and women’s teams will be on Feb. 1 at the University of Georgia in Athens.

Junior thrower Laura Sheckter broke Emory’s women’s shot put record with a 13.51-meter throw. Junior sprinter and jumper Rebekah Bondi and freshman sprinter Abigail Baisley both finished at No. 2 in their races. Freshman sprinter Claire Evans advanced to the finals of the 60-meter hurdles, finishing at No. 8. Lee University (Tenn.) finished ahead of all 16 teams with 133.5 points.

On the men’s side, junior sprinter Liam Fost won the 400-meter dash and picked up 10 points for the team. The Eagles finished the 800-meter run with three of their runners in the top eight for a total of 11 points in one race. The University of Alabama in Huntsville finished with 146 points and claimed the No. 1 title in the men’s division.

The men’s and women’s track and field teams will next compete at the two-day JDL Flat is Fast Invitational in Winston-Salem, N.C. 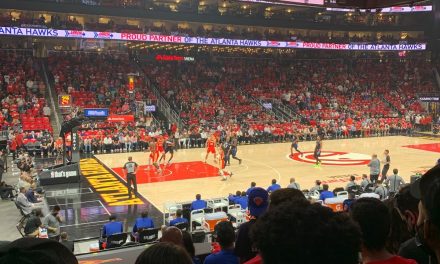 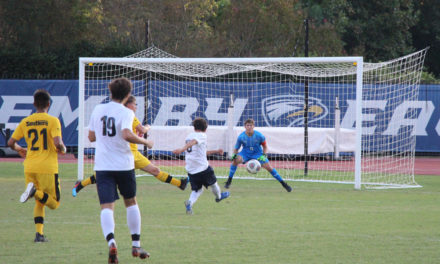