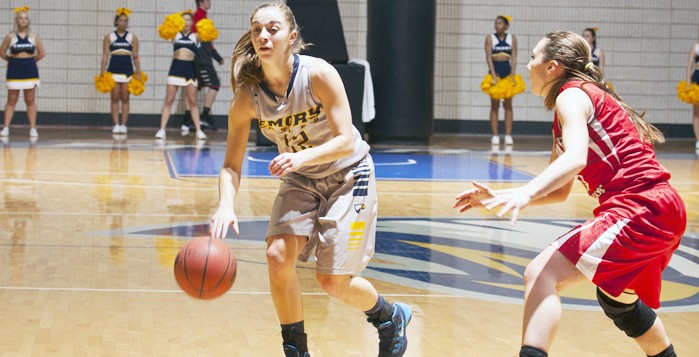 The women’s basketball team defeated Oglethorpe University (Ga.) in the season’s home opening game, triumphing with a box score of 80-61.

This marks the second game of the season, the first also a victory against LaGrange College (Ga.). The Eagles are now 2-0.

Sayyid also performed her second career double-double within the first 20 minutes of the game.

Teammate and junior Ilene Tsao said Sayyid’s performance uplifted the spirit of the rest of the team.

“[She] motivated the rest of the team,” Tsao said.

Sophomore Shellie Kaniut also scored in the double digits, her second time this season, with 16 points, including two three-pointers.

The Eagles shot 44.3 percent from the floor, compared to 31 percent for Oglethorpe, in addition to out-rebounding them 44-34.

“It was a game we more or less controlled,” Head Coach Christy Thomaskutty said.

Despite the team being relatively young, Tsao said the team overall played well for it being the second game of the season.

The team lost seven members after seniors graduated last May, according to Tsao.

Thomaskutty added that some members of the team recently recovered from injury, and the team, overall, will improve with more experience.

“Our freshmen are growing up quickly,” she said.

She added that the team is growing together and learning to jell with each other.

“I like where we’re at right now,” Thomaskutty said. “We’re striving for consistency.”

Thomaskutty added that as of right now, it is too early in the season to make predictions about the rest of the season or start thinking about the championship season.

“Right now we’re focusing on the next game,” she said.

“I think it’s definitely going to be game by game,” Tsao said. “Each game is going to get us more prepared.”