‘Sausage Party’ is a Mixed Bag of Comedy Treats 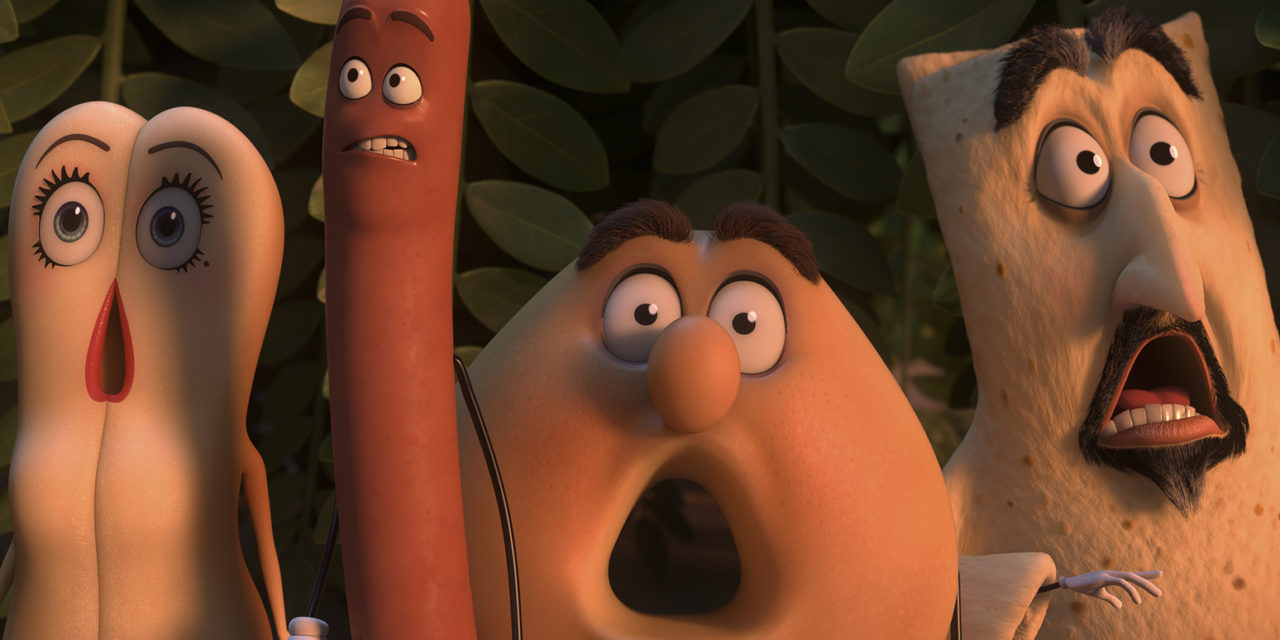 If someone pitched me a food-inspired, Pixar-esque film through the lens of Seth Rogen’s low-brow stoner comedy sensibilities, I never would have thought it would amount to anything good. After seeing Sausage Party, though, I can now say I wasn’t entirely wrong, but for reasons different than I expected. If you were on the fence about seeing the film, I would recommend it purely for the sake of experiencing one of the most batshit insane comedies in years. Unfortunately, however, Sausage Party lacks the punch present in most of Rogen’s work (Superbad, Pineapple Express), relying on obvious jokes too often for its own good and hoping that the audience will give in to its simple premise.

In the film’s world, the food we eat is actually sentient, believing its  purchase in grocery stores to be the passage to The Great Beyond where the benevolent “Gods” (humans) watch over it. Our leads are a hot dog named Carl (Rogen) and a hot dog bun named Brenda (Kristen Wiig) who are in love with one another. When the two are separated from their “God” during their purchase, Carl discovers that The Great Beyond is not the paradise that the food believes it to be, as humans actually massacre and eat the food after they leave the store. Carl takes it upon himself to find proof of this dark truth and expose The Great Beyond as a lie. Along the way, he and Brenda pick up friends: a bagel named Sammy Bagel Jr. (Edward Norton), a lavash named Kareem (David Krumholtz) and a taco shell named Teresa (Salma Hayek).

If you see the obvious humor in the leads being a hot dog sausage and bun, then you’ve already heard 50 percent of the film’s jokes. Rogen’s knack for making smarter “bro” movies than his peers doesn’t seem to be on full display here, as he often goes for cheap gross-out gags and innuendos rather than allowing the absurdity of this film’s premise to provide the comedic weight. Not a scene goes by in which Carl and Brenda don’t make quips about “sliding into each other” or “giving [her] only the tip,” which is funny for the first 20 minutes but becomes tedious rather quickly.

Where the film’s comedy does succeed, on the other hand, is in that other 50 percent in which it commits itself to a raunchy satire of the Pixar studio machine. The main fun of Pixar films, such as Toy Story, is in seeing interpretations of our interactions, pop culture and politics through the perspective of something familiar, such as our childhood toys or the bugs in our backyard. When Sausage Party commits to world building, it comes off graciously, gradually peeling back the curtains on a politically incorrect world in which each food item is exactly the cultural, racial or sexual stereotype you would expect. These moments had me laughing at every turn, from the Israel-Palestine conflict paralleled as a battle for shelf space between the kosher and halal foods to the international food aisle serving as a miniature Chinatown.

Unfortunately, these jokes tend to be buried under a grafted-on and highly unnecessary exploration of the dangers of blind religious devotion that feels pointless at best and disingenuous at worst. Rogen’s brand of comedy often has heavy themes of friendship and loyalty amidst the weed and sex jokes that make his work feel more authentic than that of your average Hollywood comedy writer, but none of that honesty seems to have found its way into Sausage Party. The attempt at exploring the destruction of false religious idols, loss of innocence and what even feels like an endorsement of atheism rings hollow in a film that should embrace how shallow it is rather than pretend that it is conveying a deep message.

Nonetheless, , the cast is completely game for Sausage Party and even turns in a few surprising performances. As expected, Rogen essentially plays himself as Carl (take from that what you will). Wiig is passable as Brenda, though the character’s one-note story arc isn’t anything to write home about. She’s the staunch prude to Carl’s free spirit and is there to learn about the dangers of blind devotion, but rather than a comedic foil, she comes across more as a wet blanket. The true highlights are in the supporting cast, particularly Norton’s bagel version of Woody Allen and Salma Hayek as, I kid you not, a repressed lesbian taco. Nick Kroll portrays the vengeful villain of the piece, Douche, who, despite often feeling like a villain from a different film, manages to make a literal douche actually feel like a serious threat in a movie, which is no small feat.

It should be noted that the film’s R-rating is on full display, particularly in the last 20 minutes, in which it explodes into both a literal and figurative orgy of violence and sex. In many ways, this feels like the weakest part of the film because it takes a major tonal shift that breaks its own universe’s rules at times. While it’s not as explicit as something like Fritz the Cat, it undoubtedly pushes animation’s boundaries, but lacks any real purpose behind the uncomfortable sequences it shows to us. It feels more like a pissing contest with the Motion Picture Association of America than anything of actual comedic substance.

Sausage Party is worth a look if you’re even slightly curious about how far the film is willing to go. However, you should temper your expectations if you’re expecting consistent comedy throughout. To borrow the obvious food analogy, Sausage Party is like a bag of trail mix  — don’t expect it to be all M&M’s.