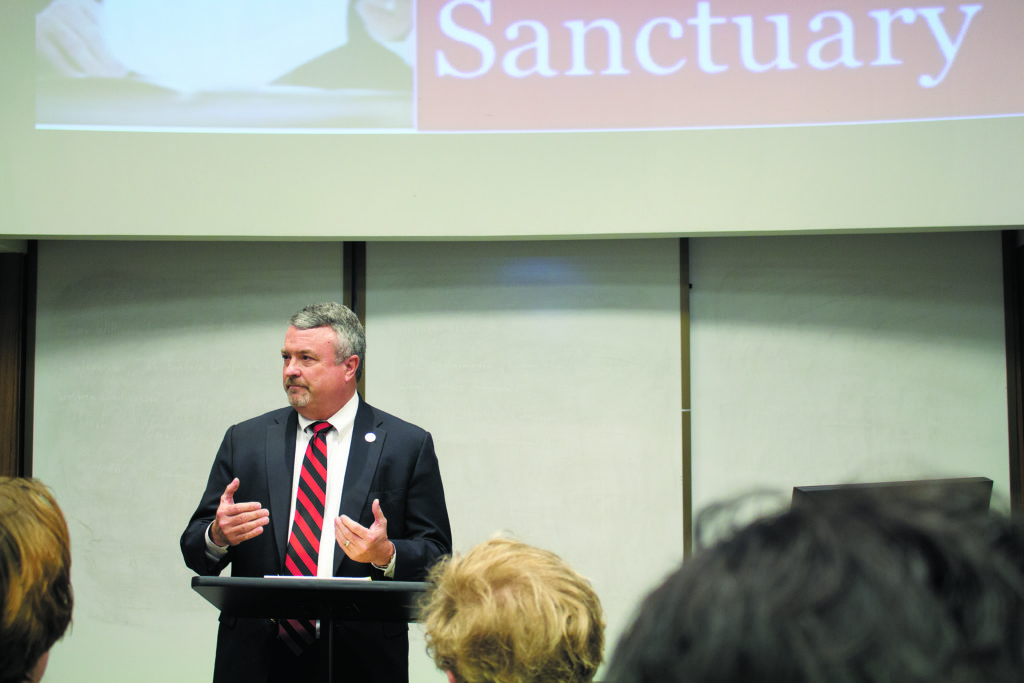 A Georgia state representative drew a crowd of more than 100 Emory community members for discussion of controversial campus-related bills.

At the beginning of the town hall, the crowd’s shouting often drowned out Ehrhart. Throughout the town hall, Ehrhart engaged with event attendees, who called him a “racist” and a sexual assault supporter, among other names. Ehrhart responded that he desired to “trigger” students and told those screaming at him that they needed to go back to their “safe spaces with their mom and dad.”

A coalition of more than 30 students representing Sexual Assault Peer Advocates (SAPA) were among the most vocal attendees and grilled Ehrhart on his policies. SAPA President Jocelyn Hong (17C), who spoke on her own behalf, said that she believes the students attended to “support survivors and call for accountability.”

Approximately 10 students, including Hong, walked out in protest of Ehrhart over the course of the event in protest of the format of the event. Ehrhart initially only took questions that were submitted prior to the event. Once the audience calmed, Ehrhart took live questions from audience members on his bills as well as a range of other subjects like campus safety and the Trump administration.

Ehrhart said that H.B. 37 would cut state funding for colleges that refuse to comply with law enforcement in protecting undocumented students.

Several colleges nationwide, such as Columbia University (N.Y.) and Tufts University (Mass.), have designated themselves a “sanctuary campus.” While the label has no legal definition, it signals that the school will support its undocumented students.

Ehrhart said that Emory is no longer at risk of losing any of its $96 million in state funds because the University has agreed to follow the law, even though it will offer support to undocumented students.

Ehrhart’s statement was hardly a relief to Lynne Huffer, Samuel Candler Dobbs Professor of Women’s, Gender and Sexuality Studies and a member of Emory Sanctuary Coalition, a group that advocates for undocumented students.

“I’m concerned about this bill’s effect on Emory, but it’s more than Emory,” Huffer said. “Putting this bill in the larger picture of how brutally anti-immigrant our society has become, it’s not surprising that undocumented students feel threatened.”

H.B 37 has passed the Georgia House of Representatives in February and Senate Tuesday. The bill now rests with Gov. Nathan Deal, who will decide whether to sign it.

The conversation veered toward H.B. 51, which was tabled by the Senate Judiciary Committee Thursday night. The bill would have required a law-enforcement led criminal investigation take place prior to punishing someone for a crime committed on a college campus. Ehrhart has said that he hopes to attach H.B. 51 to another unspecified piece of legislation in order to force a vote on the bill.

“The only thing that bill says you can’t do is punish someone without due process,” Ehrhart said.

It would also take money currently devoted to campus investigations of Title IX complaints and give it to campus sexual assault prevention, counseling and training programs for students.

Following the 2011 “Dear Colleague” letter from the U.S. Department of Education, more than 300 colleges and universities revamped their sexual assault investigation process. The letter issued guidelines to address sexual violence on college campuses which, according to Ehrhart, infringe on due process for the accused while costing taxpayers millions.

Hong disagreed with Ehrhart, stating she believed the letter was intended as a reminder to institutions to follow Title IX. According to Hong, the campus Title IX process helps survivors avoid a law enforcement system that some victims advocates believe is unsympathetic and unhelpful for victims.

“Forcing survivors from one broken system to another isn’t the solution,” Hong said.

Ehrhart railed against Title IX coordinators at colleges and universities, claiming that their training is inadequate. Several of the bill’s critics believe it will severely repress reporting of sexual assaults, but Ehrhart disagrees.

Danielle Trottier (17C), who attended the event, believes the bill stands only to help the accused, despite the potential resource funding increase.

“My biggest issue with the bill is that it protects perpetrators [of sexual assault],” Trottier said. “Survivors should be able to decide how they want to go forward. There is no clear easy fix to sexual assault, but I don’t think it’s limiting the options of survivors.”

While ECR President Christian Zimm (17C) said he was not “terribly familiar” with H.B. 51, he argued that everyone deserves constitutional protections.

“Everyone has a right to due process,” Zimm said. “Each party, both the accuser and the accused, deserves due process.”

“He talks a big talk about civil discourse, but almost all of the questions came from the notecards [submitted prior to the event],” Hong said. “Even the questions he took from the crowd — he got to pick who he called on.”

In addition to a strong showing from SAPA, numerous open-expression observers and University communications officials attended the event.

Ehrhart traveled with several security guards. The state representative said he felt the extra security was necessary, as he was hit in the face with a sign at Emory 18 years ago. However, he commended the audience for its civility.

“We invited Congressman Ehrhart to tell the other side of the story,” Zimm said. “I think that for the most part we were able to have a good discussion.”