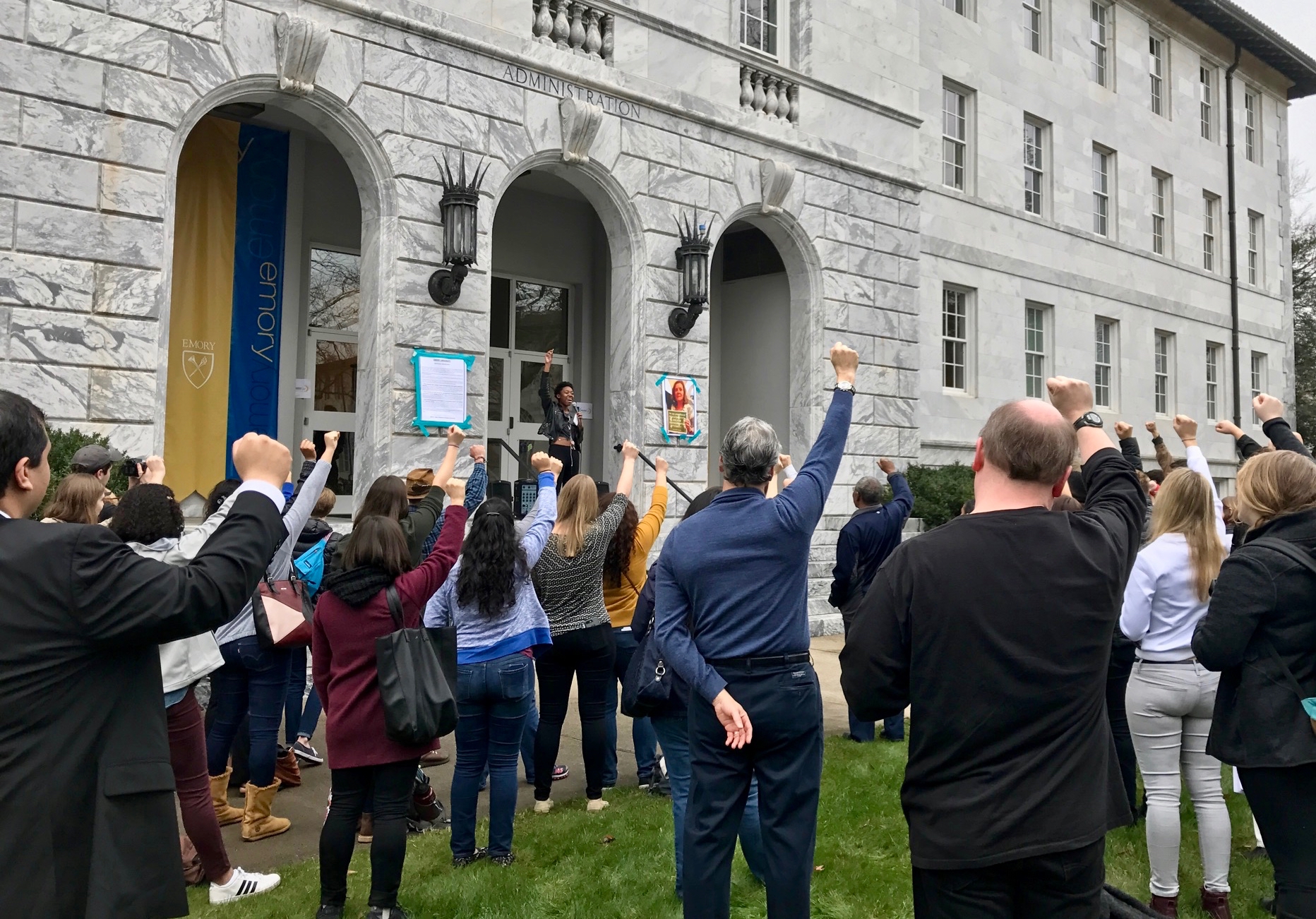 Demonstrators raise their fists in unison, chanting “We must love one another and protect each other. We have nothing to lose but our chains.” / Julia Munslow, Executive Editor

The morning of University President Claire E. Sterk’s inauguration as the 20th president of Emory, about 175 people gathered in front of the Administration Building.

But the crowd did not congregate on the Quadrangle in celebration of her inauguration. Instead, the community members and local activists assembled to call on Sterk to designate Emory as a “sanctuary campus” — a label that University administrators have repeatedly refused — as a symbol of protection and support for its undocumented students.

The Emory Sanctuary Coalition — a group that has repeatedly called for a “sanctuary campus” designation over  the past few weeks — organized the protest titled “Walkout Day for a Sanctuary Campus.”

Fourteen speakers, including faculty members, documented and undocumented students, alumni and activists, urged the crowd to continue mounting pressure on University administration until the Coalition’s demands are met.

In addition to the request for the “sanctuary” label, the Coalition asked that the University institute three policies: lawful non-cooperation with federal immigration authorities; need-based financial aid to undocumented students regardless of whether they have Deferred Action for Childhood Arrivals (DACA) status; and “full support” of its undocumented students and students from mixed-status families.

DACA is a temporary immigration benefit that protects some undocumented individuals from deportation and allows them to work in the United States. Former U.S. President Barack Obama passed an executive order in 2012 that created the program, which President Donald J. Trump vowed to repeal during his campaign. The Trump administration has not yet revised or rescinded the program.

While at least two professors cancelled class so that students could attend the protest, and some students skipped their Wednesday morning classes, the Wheel could not identify anyone who actually walked out of class or out of Sterk’s inauguration to protest.

The Coalition’s event marks the latest in a string of responses criticizing the University’s decision to refuse the “sanctuary campus” label. Students, faculty and alumni — both affiliated and unaffiliated with the Coalition — have indicated their frustration with University administrative action, or lack thereof,  through petitions, demands and a social media campaign since November.

Sterk wrote in a Jan. 31 email to the Coalition that the “sanctuary” designation “lacks substantive meaning for policy and practice, but also sends a message that is interpreted inconsistently across the country.” She added that Emory would not release confidential student information unless the University were subpoenaed.

In its demands, the Coalition defined a “sanctuary campus” as a “safe space” where students can live without fear.

“We strongly believe that ‘sanctuary’ is something [that] has meaning, that shows not only to the Emory community, but to the state, to the entire nation, that Emory has certain principles that we stand by,” Coalition member and College freshman Ashley Rivas-Triana said. 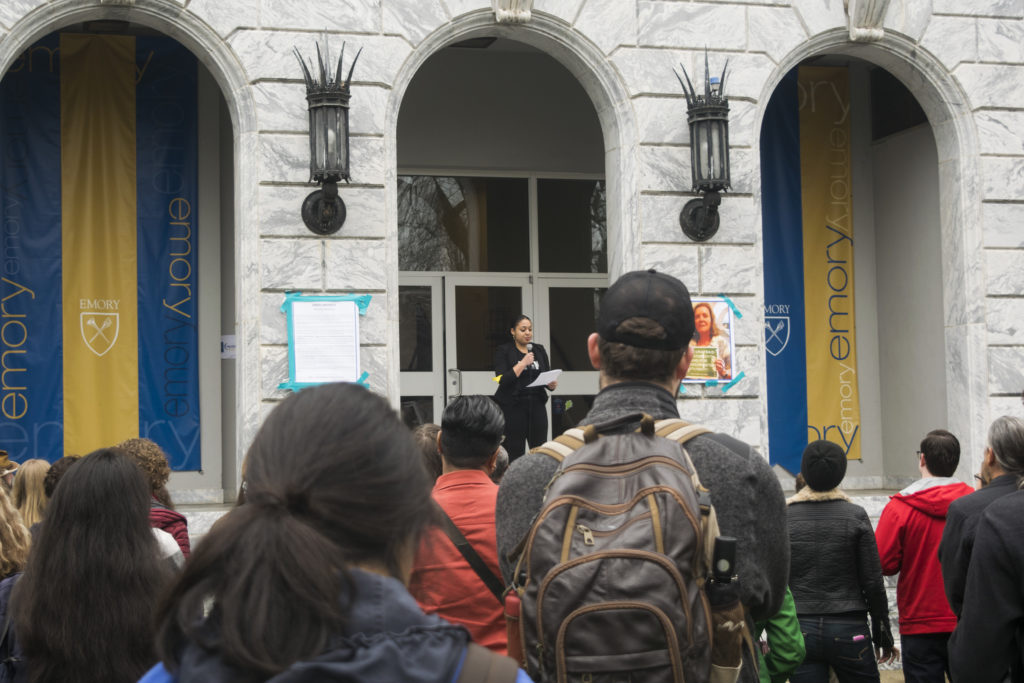 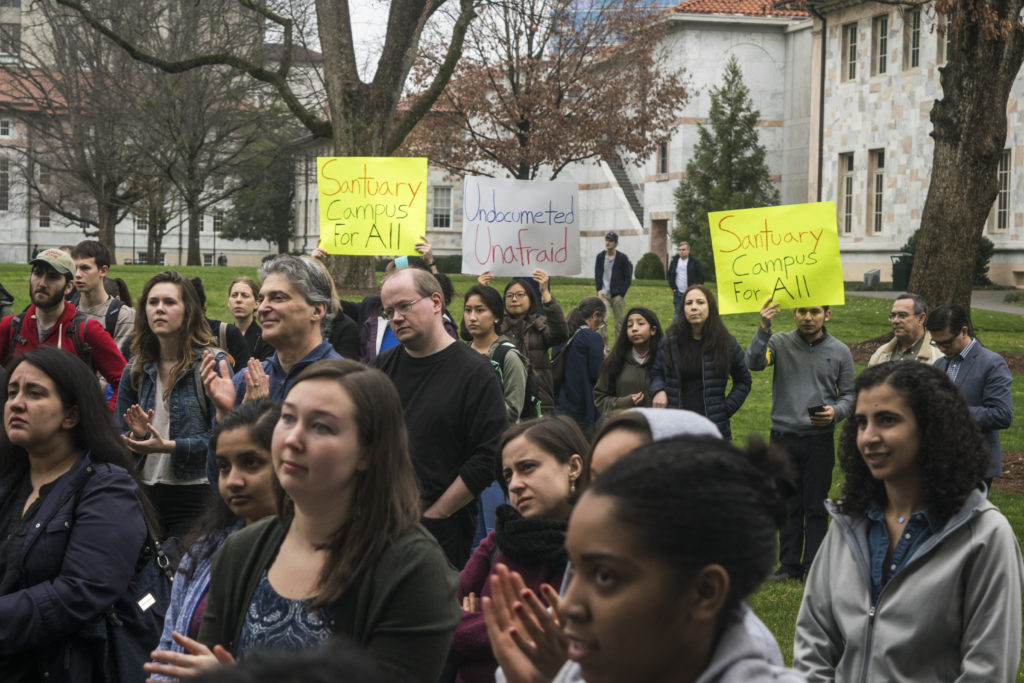 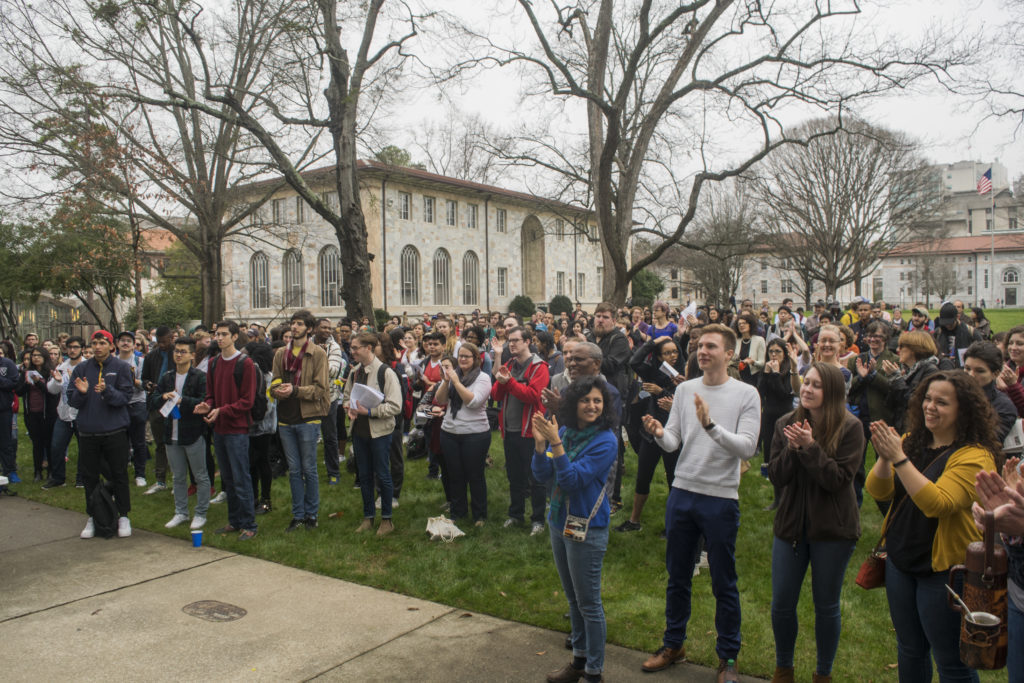 Emory issued a Feb. 8 statement in response to the protest, stating that the University supports open expression and that Sterk “appreciates the advocacy” demonstrated by community members.

Sterk supports and will continue to work on initiatives in support of Emory’s undocumented students, the statement read.

Administrators have communicated almost daily via email with the Coalition for the past week, Coalition member and Freedom University Georgia Executive Director Emiko Soltis (12G) said.

“[The administration] has been trying to work with us and meet our demands, although they’re really hesitant to embrace the term ‘sanctuary,’ ” Rivas-Triana said.

Craig Womack, associate professor of English, spoke at the demonstration about his cousin who was recently deported. He called Emory to focus on its social justice initiatives rather than its national ranking.

“[Emory] needs to pay attention to how it ranks in social justice,” Womack said. “In this arena for social justice, the only thing Emory is leading in is in its profound mediocrity.”

Muslim rights activist Asma Elhuni warned the crowd about the dangers of H.B. 136, a state bill that would mark noncitizens’  licenses, permits and ID cards “in a prominent location.”

“I’m telling you right now that we are not too far from where we were when we had internment camps in our nation in World War II,” Elhuni said.

Before dispersing, demonstrators raised their fists in the air in unison, chanting, “We must love one another and protect each other. We have nothing to lose but our chains.”

In the days leading up to the event, the Coalition launched a social media campaign with #EmorySanctuary and designed a poster reminiscent of the University’s “All In a Day” Feb. 8 fundraising campaign.

Before the Walkout, Director of Undergraduate Studies for Comparative Literature Sean Meighoo canceled his Wednesday morning class so his students could attend the event.

“If Emory does stand for values like community engagement … the Walkout was a more educational experience than just another day in class,” Meighoo said. “We had to urge our president [to declare Emory] a sanctuary campus.”

College sophomore Angela Jiang, who attended the protest to stand in solidarity with undocumented students, said that while she believes Sterk is doing as much as she can to enact the spirit of a “sanctuary campus” — protecting Emory’s undocumented students — Jiang also recognizes that the University’s state funding could be cut if it were to adopt the label.

Coalition member and Samuel Candler Dobbs Professor of Women’s, Gender and Sexuality Studies Lynne Huffer said that Emory’s campus has been more politicized in the past few months than at any other time over her 11 years at the school.

“There’s a sense of urgency like never before,” Huffer said.

According to Huffer, about a dozen members comprise the Coalition, but several others have  helped when asked, whether by speaking on a panel or organizing an event. At Wednesday’s protest, the Coalition members wore yellow ribbons on their arms.

“This was a consciousness-raising day, for people to see our strength in numbers,” Soltis said after the Walkout. “We will continue to fight until we win.”