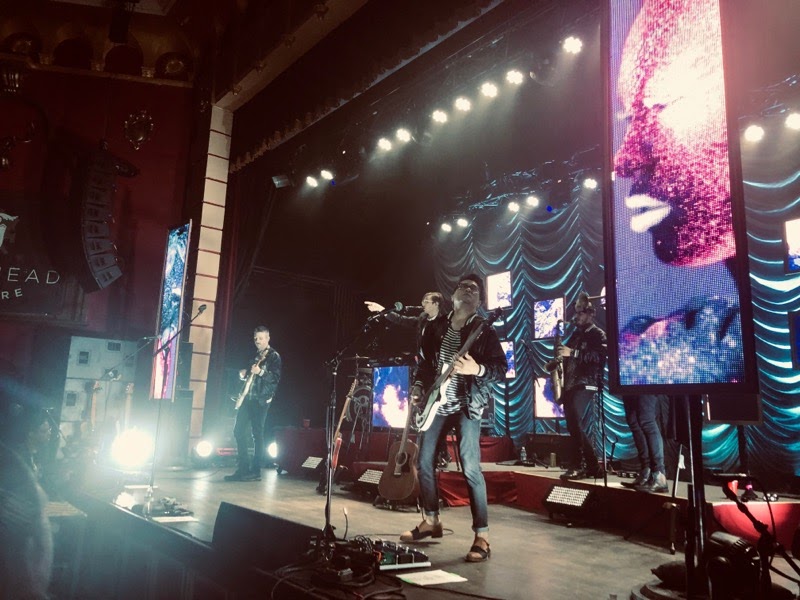 As fans arrived at Saint Motel’s concert at Buckhead Theatre on Feb. 6, lead singer AJ Jackson welcomed the crowd to “The Motion Picture Show.” This title proved to be a fitting description of the show that was to come. Weaving together theatrics, film and music, Saint Motel cultivated a fully immersive concert experience.

Indie-pop band Saint Motel formed in 2007 when Jackson and guitarist Aaron Sharp met while studying film at Chapman University (Calif.), later adding bassist Dak Lerdamornpong and drummer Greg Erwin. Since then, the band has released two full length albums, including “Voyeur” in 2012 and “saintmotelevision” in 2016. Saint Motel has built a brand around their catchy, feel-good bops, with “Move,” “My Type” and “Van Horn” all spending time on the U.S. Alternative Charts. Drawing inspiration from their background in film, the band regularly integrates visual material into their music videos. After creating virtual reality videos for each song off of “saintmotelevision,” it became the first full virtual reality album.

As the lights dimmed, triumphant orchestral music filled the room. Jackson emerged within the crowd dressed in a winter coat and clutching an oil lamp, making his way through the audience as a voice over the loudspeaker narrated the journey of a man trapped under snow on Mount Everest. After a pause, the narrator announced triumphantly, “Could it be? He’s alive!” With this, lead singer Jackson threw his coat into the audience and the band burst into the aptly titled “Cold Cold Man.”

Moments of narration were woven throughout the set, building a larger, interconnected story. Later in the show, the voice once again filled the room, telling the war story of an evil dictator. Here, Jackson strutted on stage in military garb and led the audience in a sequence of “Hey”s before breaking into the commanding anthem “Dear Dictator.” Near the end of the set, bright galaxies filled the screens, and the narrator prompted “Are we alone?” Dressed in a space suit, Jackson pulled a man in a neon green alien costume onto the stage, translating his alien language for the audience.

The show slowed down as Saint Motel performed their ballad-like song “Save Me,” urging the audience, “Don’t cry, baby, you’ll be the one who saves me.” In these moments, the effects of the band’s background in filmmaking were clear. Saint Motel had clearly cultivated the intermittent storytelling to allow the audience to engage with the overarching narrative. The set felt more like an interactive musical than a typical concert performance.

Saint Motel has built a distinct identity by producing bright, danceable, indie-pop earworms. Songs like “Van Horn” are dominated by a captivating chorus layered atop boisterous horns. Ultimately, the band does not explore much outside of this structure. Although their songs are often catchy, they tend to be lyrically unimpressive. In songs such as “Destroyer,” it is hard to find much depth behind lyrics such as, “I don’t break hearts, no that’s not me/I don’t break hearts, I destroy them.” When the lack of substance and relative simplicity were combined, it left the set feeling repetitive.

It was in the songs that broke away from their typical formula where Saint Motel truly shined. Songs like “Diane Mozart” and “For Elise,” offered modern allusions to Beethoven and Mozart, with classical piano melodies woven throughout the melody. Furthermore, by incorporating aspects of gospel such as choirs and an organ, “Born Again” transformed the concert into a metaphysical experience. These moments acted as breaths of fresh air within the performance, preventing the otherwise formulaic songs from blending together. Despite the lack of originality, Saint Motel’s music is undeniably fun. The band’s most popular hit, “Move,” urges the audience to do just that. Every time Jackson began the chorus with “Gotta get up, I gotta get up,” he was met with an enthusiastic “Move!” from the crowd. The energetic staccato piano that begins “Puzzle Pieces” was faced with deafening cheers from the audience as they bopped along to the chorus, “F-f-f-face of puzzle pieces!” Throughout the show, Saint Motel brought constant energy, engrossing the audience in utter joy, despite the repetitiveness.

As Saint Motel closed out the show with their hit “My Type,” Jackson ran through the crowd, encouraging the audience to get on their feet and jump. With people freely screaming along to the chorus, “You-you-you’re just my type,” it was impossible to ignore the pure happiness that permeated the room. I found myself smiling earnestly, compelled by the contagious energy of the crowd. While the song came to an end, Jackson rejoined his band members on stage in a line, taking a long bow.

The stage fell black and the narrator’s voice came back onto the speaker, proclaiming, “Tonight we were free, tonight we were beautiful.”